It's probably been since Donald Trump was announced as host of "Saturday Night Live" before he ascended to the presidency that a host announcement has been met with such controversy, but Elon Musk now holds that honor.

Likely, the show will have more eyes than usual on it. Certainly there has been plenty of scrutiny since the announcement of cast reactions, with a few notably making social media posts that would appear to suggest they're not too thrilled about it. 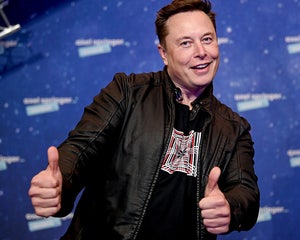 Anyone who's watched the show -- and its "Weekend Update" segment in particular -- know that co-anchor Michael Che seems to thrive in that cringe space. He's certainly been no stranger to causing controversy all on his own with some of his edgier jokes.

When Ellen DeGeneres asked him his thoughts on the controversy, the co-head writer (alongside fellow "Update" anchor Colin Jost, Kent Sublette, and Anna Drezen), Che couldn't help but to crack wise.

"Well, I was all on board for it until I found out that, like, did you know he's rich?" he asked Ellen facetiously. "Yeah, now I’m, like, against it. I wish they would have told me that before."

Ultimately, he would only say, "It's gonna be interesting." The public reaction to whatever happens may prove even more interesting.

What Che appreciates, though -- and this is something he's very happy about -- is that the announcement did stir up so much passion. "It’s cool that people care about who’s on the show. I think that’s what makes it kind of cool," he said. "The show’s been on for 46 years and people still care about who’s being booked. I think that’s kind of dope."

While Elon Musk, who's been soliciting "skit" ideas online for the past several days, is probably hoping not to ruin the storied franchise, Che shared that he actually regrets missing out on his opportunity to ruin something else entirely, Colin Jost and Scarlett Johansson's wedding.

A guest there, Che shared that it had actually been his intention to cause a whole scene, probably officially objecting to the union. But when he got there, something happened.

"I got there and it was, like, just a normal people wedding," he said. "It turns out they’re, like, actually normal, and it was sweet I was like, I can’t mess this wedding up. I just let them have their day."

Hilariously, though, not everyone was happy with his decision to let them have their day. Even better, it was Jost's parents.

"Now, I feel like maybe I dropped the ball," he lamented, looking genuinely forlorn. And clearly his oversight into kindness has weighed on him so much, he has plans to make things right. The solution lies in a lie he's carried on way too long now.

Che has been joking forever that he'd bought this "really, really bad" wedding gift for Jost, leaving his co-anchor increasingly harried over what it might be, but it turns out the whole thing was a lie. He actually hadn't bought a gift at all.

Now, though, Che feels he needs to go make the lie a reality, and make it a real doozy. "I didn’t ruin his wedding -- I feel like I kinda let him down -- so now I feel like I gotta ruin the marriage, maybe."