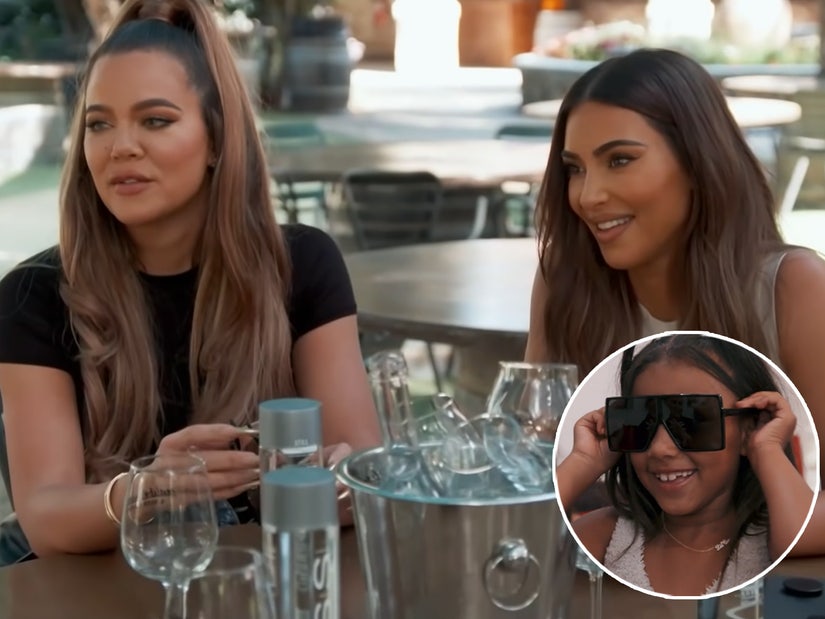 "North West" tells TooFab she was "hella nervous" to meet Kim and Khloe and reveals what we didn't see on camera.

The woman behind Nori's Black Book was finally revealed on Thursday night's episode of "Keeping Up with the Kardashians."

For years now, Natalie Franklin has run a parody Instagram account written from the bratty POV of North West. While she never had any official connection to the Kardashian family, its members would often comment on her posts -- cracking up at the commentary she came up with for each episode.

While we here at TooFab knew who she was for some time now -- we recruited her to do KUWTK recaps a few seasons back -- the rest of the world learned her identity as she finally came face-to-face with Kim and Khloe Kardashian.

Throughout the episode, Kim and Khloe wondered aloud who was running the account, speculating that it was someone from their inner circle because some of her observations were so spot on. They grilled their closest confidants -- including publicist Tracy Romulus, hairstylist Jen Atkin and longtime friend Steph Shepherd -- to no avail, before they finally met up with the real Franklin at the end of Thursday's episode.

During the episode, Kim even put the actual North West on FaceTime with Natalie -- but the tot couldn't be bothered, fitting perfectly with the persona Franklin had created for Kim's oldest.

Following the episode, TooFab caught up with Natalie for some more intel about the big reveal, her concerns before meeting Kim and Khloe and her plans for the future, now that KUWTK is coming to an end.

Natalie! So it was you all along! How do you feel now that your secret identity behind Nori's Black Book has finally been exposed?

It's me! I almost feel relieved. Keeping a secret that big for 7 year is hard, so I'm glad it's out. And I love the way I got to reveal myself. Being on KUWTK was absolutely perfect and truly a full circle moment.

Take us back to the very start — how did you first come up with the idea for Nori's Black Book?

I use to be a huge fan of Suri's Burn Book. It was a super popular Tumblr account written from the POV of Tom Cruise and Katie Holmes' daughter, Suri Cruise. She would make fun of other celebrity kids and I absolutely loved it. I always thought it would be cool to do something like that. Cut to North being born and I was like "Hey, this cold be like Suri's Burn Book." I switched to Black Book because at the time North was wearing a lot of black and just had her talk about her own family, rather than talk about other celebrities. I started on Tumblr and it was pretty popular. Then I brought to IG and it exploded.

What was the response like? Was it hard not to take credit for something people genuinely found hilarious?

The response has been incredible! I was just telling Khloe and Kim that I'm surprised how many people care about "the reveal." I'm not big on attention so I was overwhelmed at first, but I've gotten used to the exposure and I love it. The best part is to see how many people enjoy my writing and humor.

Can you remember the first time the real life Kardashians first became aware of NBB? That must have been exciting ... what was that like?

That's hard because on IG it's really hard to see who likes or comments on your posts, especially if you have a large following. But my mom told me that Khloe followed me and I was like. "Huh?" I couldn't believe it because I don't tag anyone in the family so I was shocked. The best moment was when Kanye took a screen shot of my account and put it on his Twitter and Instagram. That was dope!

As our columnist at TooFab, we of course knew your secret identity ... your episode recaps have been a joy to read. How do you feel about the show finally ending?

Thank you! I was not happy about it. It's been such a constant in my life for so long. But it makes sense. They're way too famous for the show now. I can't wait to see what they do over at Hulu.

So tell us about your unmasking on the show - who reached out to you? were you surprised they tracked you down?

So Tracy initially reached out to send me a PR Box. She later followed up and asked if I wanted to meet Kim and Khloe on KUWTK. I was shocked. I almost dropped my phone when I got the email. It was so unexpected. Never in my wildest dreams did I think I would be on KUWTK. That's just not something that happens. I was so surprised they worked so hard to track me down. It's funny because they could've just asked me who I was, I would've told them.

Were you nervous / scared at all to meet them? How did it go?

I was hella nervous, but I tried my best to stay in the moment. Eventually my nervousness turned into excitement. Kim and Khloe are really nice and easy to talk to. It was like I knew them my whole life, so I had a really good time. They're really funny people, we laughed a lot.

What didn't we see on TV that you think we should know about the meeting ... did they say they anything that surprised you?

Oh this is funny --- So we actually had lunch. I ordered a salad because I wanted to eat some cute food on camera. Kim and Khloe had burgers and fries. I was starving! I asked Kim, "Oh you guys didn't get salads?" She says, "Oh no. There will be no salad shaking today." I was so hungry and no one offered me any fries. RUDE!

Were you surprised Kim got the real North on FaceTime? Was her less-than-thrilled reaction all you expected from her and more?

I was! When Kim said let's call North I squealed internally. Kim and Khloe are great, but this is the icon North West! I was actually really nervous to meet her. I loved that she was so uninterested in me. I would've been disappointed if she was this sweet, polite little girl, because that's not the girl I created. North made it clear that I was wasting her time and she had other things she could've been doing. It was great!

Have you stayed in contact with them since filming? Has meeting them changed your approach to how Nori talks at all?

I've exchanged a couple DMs with Khloe and Kim. Like I said they're really nice people. They are super approachable and I appreciate them cheering me on. Khloe told me not to change just because I met them and I promised I wouldn't. I actually think I'm harder on them now. HAHAHA!

While the show is going away - the Kardashian clan certainly is not. Have you any plans to keep up keeping up with them in future shows (be it as NBB, or maybe another alter ego)?

Another alter ego account isn't possible, because these other kids aren't doing it like North. She is so full of personality and gives great content. No one compares. I've tried and it doesn't work. I'm going to keep doing NBB as long as people like it and as long as North lets me. She might get her own IG account one day and tell me to sit down.