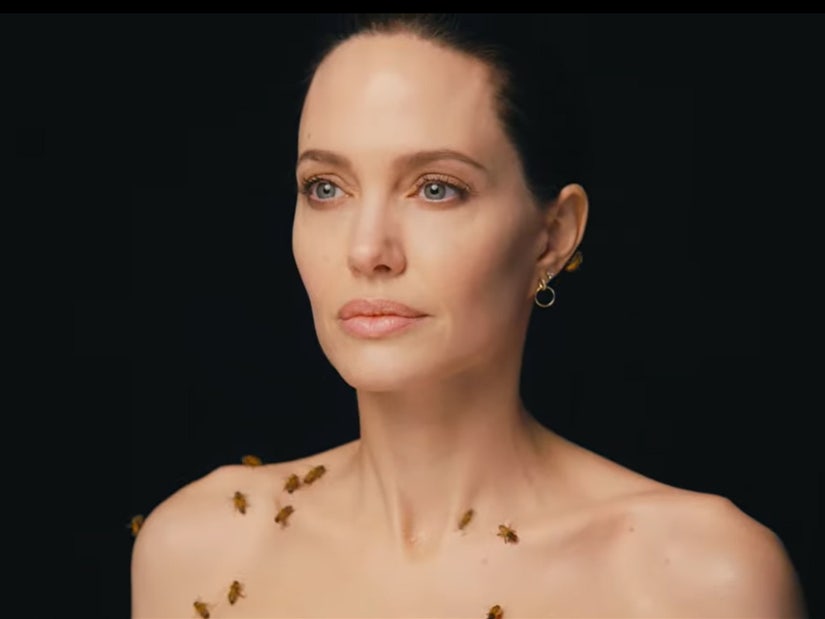 "You have to be really still and in your body, in the moment, which is not easy for me."

Angelina Jolie just covered herself in bees for a good cause.

To celebrate World Bee Day, the actress posed for a portrait for National Geographic while her body was swarmed in bees. According to the magazine, Jolie, 45, "stood perfectly still" for 18 minutes to get the shot, below, which was taken by photographer Dan Winters.

While speaking to NatGeo, the Oscar winner opened up about the importance of bee conservation and encouraged people to join in on helping protect the bees.

"With so much we are worried about around the world and so many people feeling overwhelmed with bad news and the reality of what is collapsing, this is one [problem] that we can manage," Jolie said. "We can certainly all step in and do our part."

The "Those Who Wish Me Dead" actress pointed out that she doesn't think that many people "know what damage they're doing."

"I have six kids and a lot happening and I don't know how to be the 'perfect' anything," added Jolie, who shares kids Maddox, 19, Pax, 17, Zahara, 16, Shiloh, 14, and 12-year-old twins Vivienne and Knox with ex Brad Pitt. "And so if we can help each other to say, 'This is a way forward, simple, and this is something you can do with your kids.'"

Meanwhile, also during the interview, the "Salt" star shared details about posing with the bees for the portrait, revealing she wasn't allowed to shower three days before the shoot.

"It was so funny to be in hair and makeup and wiping yourself with pheromone," Jolie said. "We couldn't shower for three days before. Because they told me, 'If you have all these different scents, shampoos and perfumes and things, the bee doesn't know what you are.' ... Then you put a few things up your nose and in your ears so you don't give them as many holes to climb in."

"I did have one that got under my dress the entire time. It was like one of those old comedies," she recalled. "I kept feeling it on my knee, on my leg, and then I thought, 'Oh, this is the worst place to get stung. It's getting really close.' It stayed there the entire time we were doing the shoot. And then when I got all the other bees off, I lifted the skirt and he went away."

The activist said "it just felt lovely to be connected to these beautiful creatures," adding that "there's certainly a hum."

"You have to be really still and in your body, in the moment, which is not easy for me," she explained. "I think part of the thought behind it was, this creature is seen as dangerous sometimes or stinging. So how do we just be with it? The intention is we share this planet. We are affected by each other. This is what it should feel like and it really did, and I felt very honored and very lucky to have the experience."

Back in March, Jolie was named the "godmother" for Women For Bees, a female beekeeping program created by the United Nations Educational, Scientific and Cultural Organization (UNESCO) and French beauty brand, Guerlain.