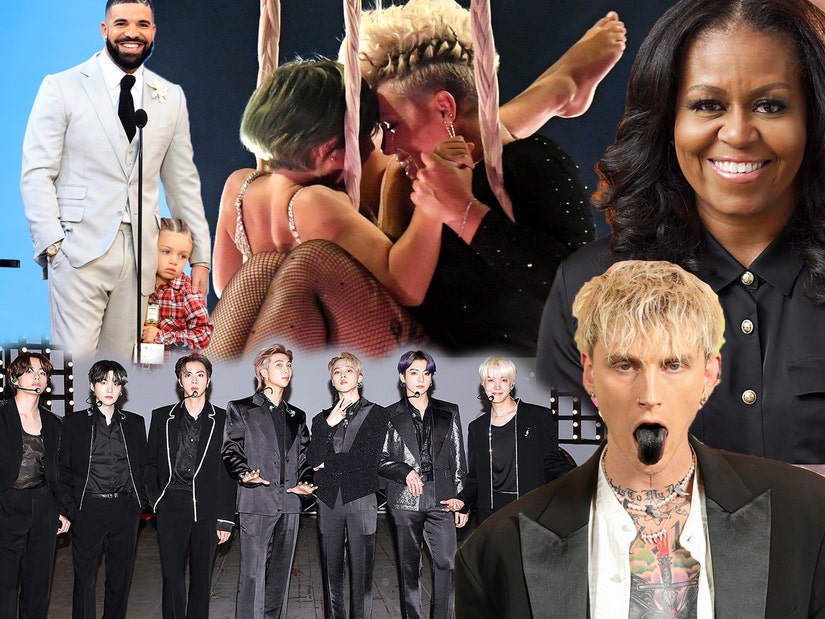 These are the moments that had everyone talking.

The 2021 Billboard Music Awards aired live from Los Angeles on Sunday, with Nick Jonas at the helm as host. Going down just seven months after the 2020 BBMAs -- which happened in October after being delayed due to the pandemic -- this year's awards are based on the chart period of March 21, 2020 through April 3, 2021. 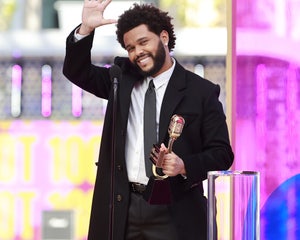 Going into the show, The Weeknd was up for the most trophies with a whopping 16 nominations -- and he wound up winning quite a few of them as the night went on. P!nk was honored with the ICON Award and proved why with an amazing performance that featured not only her biggest hits, but her daughter Willow Sage. Her kid wasn't the only one who stole the spotlight either -- Drake's son had a mini-meltdown as he made a rare public appearance with his dad, who won the Artist of the Decade Award.

Those, of course, weren't the night's only viral moments -- see which performances and wins really popped below!

The song has been out for about a month, but Sunday night saw the first live performance of "Kiss Me More" from Doja Cat and SZA -- and they did not disappoint.

The two brought the vocals, some dazzling visuals and fierce fashion, as well as some killer choreography.

Their fans, natually, ate it up!

The ending is too immaculate. Just look at Doja & SZA pic.twitter.com/XyKoKq9uHL

doja and sza always having the best visuals pic.twitter.com/5y0AuwOalh

DOJA CAT AND SZA ARE THE MOMENT pic.twitter.com/YvL5frO5cd

Sza on the other side of the wall waiting for Doja Cat to finish her verse: pic.twitter.com/r93OPfGsuB

DOJA AND SZA EATING UP THE STAGE WITH THAT DANCE BREAK pic.twitter.com/cIElhuJcdn

Should of saved doja and sza for later, people gonna check out after their performance pic.twitter.com/q5yKkT2fg4

The Weeknd Gets Some Love

After he was somehow totally shut out at the Grammys nominations this year, The Weeknd won the first award of the night at the Billboards -- picking up a trophy for Top Hot 100 Artist.

"First and foremost I'd like to thank my fellow nominees," he said, reading off his iPhone. "It's been a dark year and you've brought light and escape with your music, genius, brilliance and you deserve this award just as much as I do, if not more."

He then thanked his team, his family and the fans -- "and God, that I don't have to wear that red suit anymore."

LOOK AT THE WEEKND GO WITH 10 AWARDS ABEL TESFAYE YOU DESERVED THEM ALL 😊😊😊 #BBMAs2021 #BBMAs pic.twitter.com/FRqEAemB7F

the weeknd everytime he had to put on the red suit and medical tape pic.twitter.com/x44FZVTBdQ

The Weeknd to his red suit pic.twitter.com/eaiOvKCrWF

The weeknd winning the first award of the show.. happy tears #BBMAs pic.twitter.com/DdjrxmHnoV

Alicia Keys Takes Us Back

It's been 20 years since Alicia Keys' dropped "Songs In A Minor" on us and to celebrate that anniversary, the Billboards gave her the spotlight to play a medley of hits from the legendary album. She even got an incredible introduction from Michelle Obama, before tickling the ivory while telling the audience, "I'm never leaving the keys, because I know what I'm worth."

She then launched into "A Woman's Worth," "How Come You Don't Call Me" and, of course, "Fallin'" -- and sounded just as amazing now as she did two decades ago.

She is the legend the myth the MOVEMENT. ALICIA KEYS! #bbmas #BillboardMusicAwards

P!nk was celebrated with the ICON Award on Sunday night, following an introduction from rocker and good friend Jon Bon Jovi. But before picking up her trophy, she delivered one helluva performance showing us why she got the honor in the first place.

She kicked off the 9-minute medley with 9-year-old daughter Willow by her side as they both did her trademark aerial stunts while their duet "Cover Me In Sunshine" played in the background. It was a beautiful mother-daughter moment -- and P!nk was clearly a very proud mama.

"I love what I do and I love the people that I get to do it with," she said, before thanking her family and fans as she collected her trophy. "I cannot wait until we can just sweat all over each other. Dream big, because what if it comes true?"

what an unforgettable moment between mother and daughter 💞 #BBMAs @Pink pic.twitter.com/zeiWCXrVia

“Dream big because what if it comes true?” Pink pic.twitter.com/Y83Y9JrsJA

“Dream big, because what if it comes true?!” -@Pink
Love this so much.
#IconPINK #BBMAs

Pink and Willow gave us the collab performance that we needed all of this time at the #BBMAs that’s why she’s an icon 🔥 pic.twitter.com/Y1ewszMFww

Look at that smile. I seriously can’t get over this performance. My jaw hit the floor and then I was in tears lol. Such a Beautiful mother daughter moment. #Pink #Willow pic.twitter.com/Px8I5c1JAf

Tina Knowles-Lawson presented the second annual Change Maker Award to Houston-based rapper and activist Trae Tha Truth, calling him a true "superhero." The rapper received the award for "his unwavering dedication to fighting for, and delivering, social and medical equity in his community."

He ended his speech by repping for Houston and proclaiming, "We're still gonna need justice for Breonna Taylor."

BTS is finally all "Dynamite"-ed out and gave their world premiere performance of their new single, "Butter."

The supergroup did what needed to be done with their energetic choreography, always on-point vocals and sleek style that's made them one of the biggest acts in the entire world.

Their performance comes after they picked up the trophy for Top Duo/Group, Top Song Sales Artist and Top Social Artist (Fan Voted).

so where are we gonna fit the 4 BBMAs you just won? 😏 pic.twitter.com/V0kSE8Q1ug

Thank you @BBMAs! Thank you #BTSARMY!
You made this all possible💜

thank you sincerely to ARMYs who gave us the honor to receive all four awards that we were nominated for. army forever bangtan forever💜#Got_ARMY_Behind_Us https://t.co/PwlbJ0v4AA

And Vmin really said #SmoothLikeButter pull in like no other. @BTS_twt pic.twitter.com/3jT8RZV832

This performance will be an insane fan-maker. Everything was so neat, and probably for the first time in 4 years BTS comes up to US TV with a gp friendly bop supported by such an entertaining choreo. Also live version sounds even better?? What the hell

We all agree that BTS kings have conquered the stage and millions of hearts, right? ♡

I vote for #ARMY of @BTS_twt for "The best fandom" #BillboardTNT pic.twitter.com/tOJS4o06Ha

Drake was celebrated with the Artist of the Decade Award -- but it was his son Adonis who stole the show when he joined his famous father on stage. Clinging tight to his dad's leg the whole time -- and also his trophy -- Adonis was way too cute, even when he started crying near the end of Drake's speech.

During the speech itself, Drake said that while the video package that aired before was "full of a lot of confidence and bravado," the truth is he's "really bad at taking complements" in real life.

"I'm really self-conscious about my music and even if I do a good job, I always wonder how I could have done it better. I rarely celebrate anything and just for anyone watching this that's wondering how this happened, that's really the answer," he said. "It's being so unsure how you're getting it done, you just keep going in the hopes of figuring out the formula."

"I just know that I've spent an incalculable amount of hours trying to analyze all the things I did wrong," he concluded. "Tonight, for once, I'm sure as hell we did something right."

Adonis was like nah fam this ain’t it 😂💀 @Drake pic.twitter.com/Wyv7Hhc3Wd

everybody shut up drake and adonis are so cute 🥺 pic.twitter.com/kbewdRcgtx

Adonis seeing all those strangers screaming during Drake speech: pic.twitter.com/FZey0o8OEL

Drake brought Adonis out on stage. This is not a drill #BBMAS pic.twitter.com/Vtfx2krJkA

Megan Fox and Machine Gun Kelly certainly made an entrance to the BBMAs, hitting the red carpet together in a pair of looks only they could pull of. While she wore a daring dress, he decided to paint his tongue black.

It was certainly a choice. He also won Top Rock Artist and gave a shoutout to his "twin flame" Fox when he won.

Both of them were trending throughout the night for their looks:

megan fox is draining the life force from this man.....good for her https://t.co/DTxiWzHMv2

The Top Billboard 200 Album went to the late Pop Smoke for "Shoot for the Stars, Aim for the Moon!" The rapper was shot to death during a home invasion in 2020.

Accepting the award on his behalf was his mother, who thanked the fans for "honoring the life and spirit of my son, so much that he continues to manifest as if he were still here in flesh."

"He created music for the kid who has to sleep four in a room, the kid who has to figure out how to get to school each day so he can graduate and make his mom proud. He did this so that 14 year olds would not have to kill to prove they are somebody," she added. "That is the irony in this."

Check out a few more of the night's best performances below: 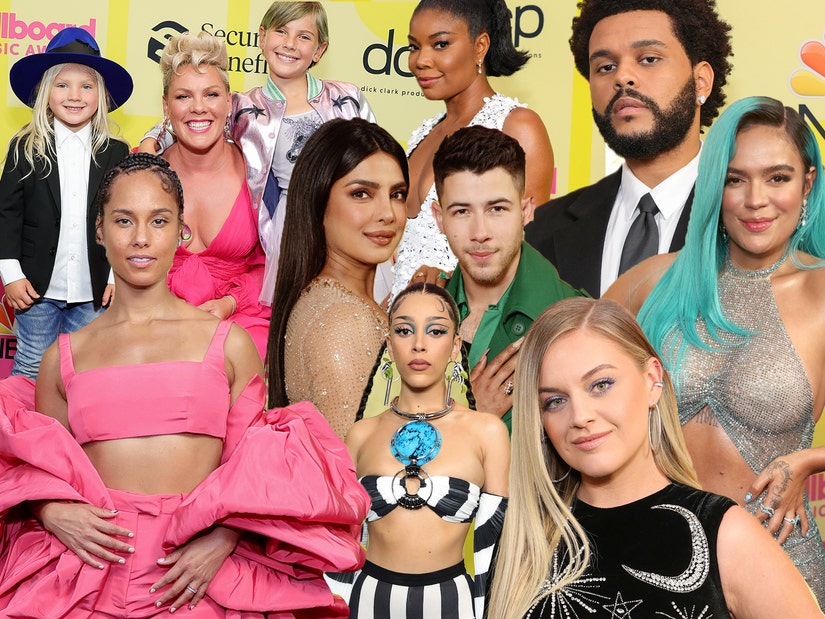