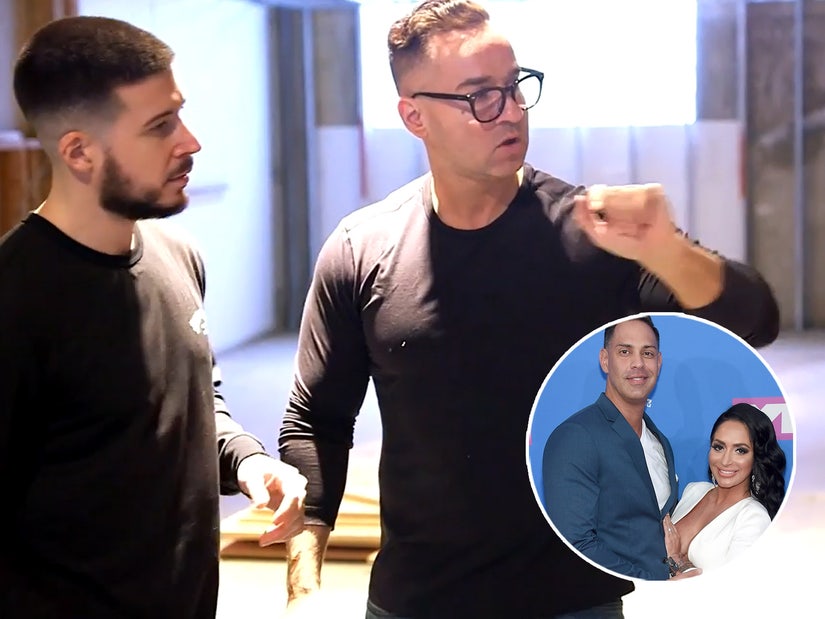 He believes Angelina and Chris "tried to keep up the facade" of their marriage by doing this.

Mike "The Situation" Sorrentino has turned into The Investigation on "Jersey Shore: Family Vacation," as he digs into what's really going on between costar Angelina Pivarnick and husband Chris Larangeira.

During the season premiere, cracks in the newlyweds' marriage started to show and tabloids began picking up on news of a possible split. With Angelina going radio silent on her costars, Mike decided to put his detective skills to work and turned his basement into his own agency.

In this exclusive sneak peek at Thursday's new episode, Vinny Guadagnino stops by Mike and Lauren's home and is warned by Mrs. Situation, right off the bat, that he doesn't "want to even know what this guy's doing" downstairs.

"What are you, Hannibal Lecter?" Vin exclaims after seeing Mike's setup. "What's going on over here."

"Angeliners has been MIA and I'm starting to put together the scenario," Sorrentino replies.

"It looks like the hunt for Osama Bin Laden," Vinny continues. "You're trying to solve what is happening with Angelina and Chris' marriage and you made this FBI board? Are you bored dude? You got other s--- going on? You okay?"

Mike tells his costar that he's a "truth seeker," before asking for Vinny's expertise on Angelina to help solve the mystery at hand. "Vinny right now is Watson to my 'Shorelock Holmes,'" says Mike, immediately proud of his pun, "Oh my god, I just made up a new name, Shorelock Holmes!"

As the two start going through Chris and Angelina's social media posts, Sitch theorizes that the two "tried to keep up the facade" of their marriage over the holidays. Calling attention to a post where Pivarnick wrote, "It's been only 9 days into he new year and I've already learned a lot. Onto bigger and better things," Mike asked, "What is not bigger and not better?"

Vinny's answer: "Chris' d---." The footage ends with Guadagnino joking to Mike -- who recently did time behind bars for tax evasion -- that "At one time, the IRS was doing this about you!"