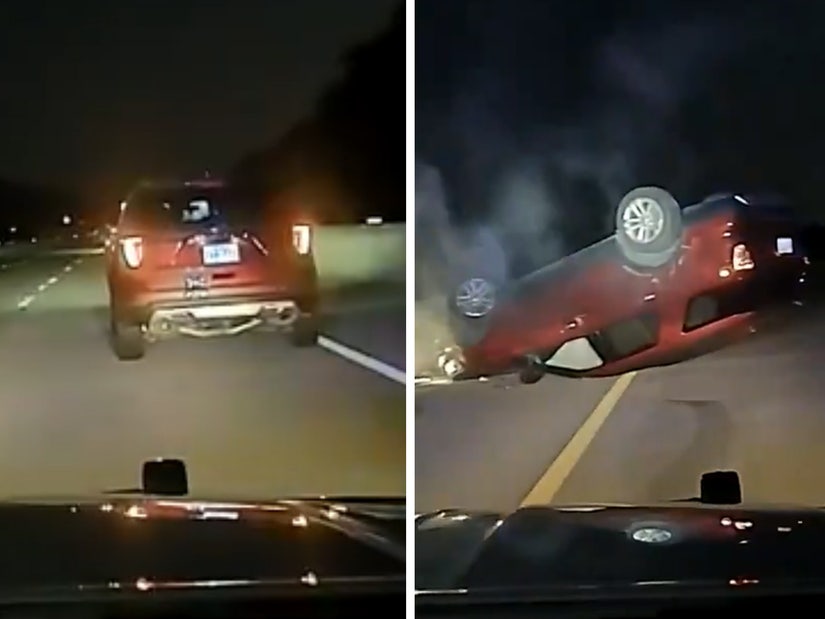 Video clearly shows her slow down and activate emergency lights; 127 seconds later her car was upside down.

Arkansas police are being sued by a woman who claims an officer flipped her car because she was pulling over too slowly.

Distressing footage shows the driver — who was pregnant at the time — having her car rolled onto its roof by a PIT maneuver.

Nicole Harper believed her unborn child had been killed in the crash.

Ofc. Rodney Dunn flipped a pregnant woman's car after she didn't pull over quick enough. It's CLEARLY not safe for her to stop on a poorly-lit rural road. She did exactly the right thing but this cop was on a power trip! How is he still employed 1 yr later? #EndQualifiedImmunity pic.twitter.com/cpVTaVmERE

According to the 38-year-old's lawsuit, she was clocked at 84MPH in a 70MPH zone when she was spotted by State Trooper Rodney Dunn; activating his lights and siren, he fell in behind her.

As the video clearly shows, Harper indicated to the right, decreased her speed and activated her double flashers; because of the narrow shoulder, she said she was looking for the exit for a safe place to stop.

But after pursuing her for exactly 127 seconds, Trooper Dunn apparently decided it was necessary to use the "pursuit intervention technique" — AKA PIT maneuver — ramming the back of her vehicle, purposely causing her to spin out of control.

The car is seen careening across the road, into a concrete barrier and rolling over, ending up completely inverted, as traffic continues to whizz by.

Casually strolling up to the still smoking wreck, showing no signs he was worried about his own safety or the driver's, Dunn asks her: "Why didn't you stop?"

"Because I didn't feel like it was safe!" the upside down Harper insists. "It didn't look like there was enough room!"

"Well this is where you ended up," he replies. "I've got plenty of room out here."

"When people don't stop for emergency vehicles, we end this right here right now," he explains. "All you had to do was slow down and stop."

"I did slow down! I thought I was doing the right thing.... I thought it would be safe to wait for the exit," she pleads.

"When people don't stop we have no idea what's going on inside the vehicle," the trooper tells her. "When people flee from us… that's what happens."

"I wasn't fleeing!" she responded.

The footage shows there was an exit less than 1 mile away from where she was flipped:

Per Arkansas State Police's own Driver License Study Guide, the very first step instructed when being stopped by law enforcement is to "activate your turn signal or emergency flashers to indicate to the officer that you are seeking a safe place to stop."

"In my head I was going to lose the baby," Harper told Fox16. "What if I had kids in the car? He wouldn't have known. Did that matter? What was going through his head? What made him think this was okay?"

Thankfully, when she attended the OBGYN the next day, a heartbeat was detected. Harper's daughter was born healthy in February.

Attorney Andrew Norwood, who is representing Harper, accused the trooper of using "deadly force", and that his actions "constituted a reckless attempt to engage in conduct that created substantial risk of physical injury."

"It's essentially a bowling alley with bumpers on both sides," Norwood told NBC News of the stretch of road. "There's nowhere to go; you're boxed in by concrete barriers on both sides."

He said Harper is now pushing for policy change regarding PIT maneuvers.

"What was done is ridiculous. … It's extremely dangerous what was done."

The state police are being represented by the Attorney General's Office, which has not commented due to the pending litigation.

"Over the past five years, Arkansas State Troopers have documented a 52 percent increase in incidents of drivers making a conscious choice to ignore traffic stops initiated by the troopers.  Instead of stopping, the drivers try to flee. In more populated areas of the state, the incidents of fleeing from troopers have risen by more than 80 percent. The fleeing drivers pull away at a high rate of speed, wildly driving, dangerously passing other vehicles, showing no regard for the safety of other motorists, creating an imminent threat to the public."

"There's a fundamental state law none of us should ever forget. All drivers are required under Arkansas law to safely pull-off the roadway and stop when a police officer activates the patrol vehicle emergency lights and siren. The language of the law is crystal clear.  Upon the immediate approach of an authorized emergency vehicle displaying the signal to stop, the driver must pull-over and stop. *(see Arkansas statutes ACA §27-51-901 & §27-49-107)"

"Should a driver make the decision to ignore the law and flee from police, state troopers are trained to consider their options.  Based on the totality of circumstances a state trooper could deploy spike strips to deflate the tires of the vehicle being pursued, execute a boxing technique to contain the pursuit slowing the driver to a stop, execute a PIT maneuver or terminate the pursuit."

"Most Arkansas State Police pursuits end without a PIT maneuver being utilized."

"In every case a state trooper has used a PIT maneuver, the fleeing driver could have chosen to end the pursuit by doing what all law-abiding citizens do every day when a police officer turns-on the blue lights – they pull over and stop."

Harper meanwhile remains charged with speeding, as well as failing to yield to an emergency vehicle, which carries a maximum penalty of a $400 fine.