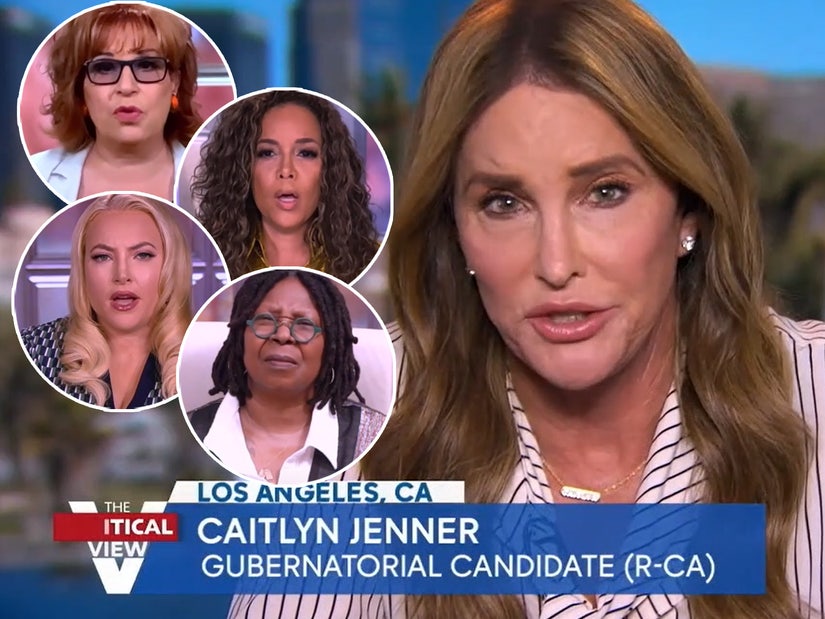 Caitlyn Jenner was given two full segments on "The View" on Thursday, but offered little substance when pressed on her gubernatorial campaign in California.

Instead of answering many of the questions thrown at her about policy plans, she spent most of the time slamming Governor Gavin Newsom and reiterated the fact that she's an "outsider" and "disruptor" in politics.

.@Caitlyn_Jenner tells @TheView she’s running for governor of California because “things need to change” and criticizes Gov. Gavin Newsom’s handling of the pandemic: “Newsom wasn’t for the people, he was for the elites.”

“I want to bring hope back... Newsom has destroyed hope.” pic.twitter.com/ZAGhJh7ekG

Right off the bat, moderator Whoopi Goldberg wondered what she would do differently had she been governor during the pandemic. She replied by calling out high gas prices, school closures and bashing Newsom for being for the "elites," vowing to "stand up" but not offering any alternative action.

Joy Behar then asked why Jenner decided to "get your feet wet" in politics by trying to become governor of the fifth largest economy in the world instead of something smaller -- saying it felt like she was "jumping the line a little bit."

"First of all, I am an outsider, I get that. We are in a state that is controlled by the Gavin Newsoms of the world and things have to change, being an outsider I think is a good thing," she said, before admitting she hasn't read all the tax regulations she's campaigning against. "I know it's a tough road, as a Republican to win in the bluest of blue states, but I’m not your average Republican, I'm an inclusive Republican."

California gubernatorial candidate @Caitlyn_Jenner on @TheView addresses reports of her campaign team including members of former Pres. Trump’s 2020 campaign: “I was able to hire some of the best people out there to join the campaign.” https://t.co/cVclFZQmjA pic.twitter.com/i6xF9jq715

Sunny Hostin then called Jenner out on some of the controversial people she's surrounded herself with in her campaign, namely Trump's former campaign manager Brad Parscale and Caroline Wren. After bringing both of them up, Hostin asked, "What do you mean by surrounding yourself with 'really great people'?"

Deflecting from the controversy around them, Jenner said she doesn't "make excuses for anybody" and added she believes she has a "good team around me that will lead me to victory."

Gubernatorial candidate @Caitlyn_Jenner calls the controversial transgender athlete bans that have been proposed in dozens of states a “very small issue in the state of California.”

“We have so many bigger issues in this state.” https://t.co/f8u2wbJuik pic.twitter.com/PBy5OSwbZU

When Sara Haines brought up Jenner's support on bans against trans athletes and asked how "significant" an issue she believed it is, Caitlyn downplayed the issue altogether.

"To be honest with you, it's a very small issue in the state of California," she replied. "We have so many bigger issues in this state, like immigration. Right now we have a huge immigration issue in this state. As governor I would first close the southern border." She added that she would finish the border wall.

.@JoyVBehar to @Caitlyn_Jenner: “A lot of Republicans in this country believe that Donald Trump won the election and not Joe Biden. Are you one of those people?”

Jenner: “I’m not going to get into that. That election is over with. I think Donald Trump did do some good things.” pic.twitter.com/mPri9Pq736

Behar then brought up another Republican talking point: the belief that Donald Trump actually won the 2020 election. Joy asked Caitlyn whether she thinks Joe Biden was the true winner -- and Jenner didn't commit either way.

"I'm not going to to get into that, that election is over with," she replied. "I think Donald Trump did do some good things and what I liked about Donald Trump is that he was a disruptor."

"But did he win?" Behar pushed back. Again, Jenner avoided answering. "He was a disruptor when he was president, I want to do the same thing," she instead said, "I want to go in and be a thoughtful disruptor in Sacramento."

Fellow Republican Meghan McCain, who agreed that Newsom has done a terrible job handling the pandemic, asked how Jenner planned to "resuscitate the hundreds and thousands of lives and dreams that have been crushed by Gavin Newsom's inconsistent policies," she offered no real specific policy answers and simply stated other governors -- like Florida's Ron DeSantis -- did things differently.

When asked about her family's reaction to her campaign, she hedged the question again and said she hadn't gotten any pushback from fellow Republicans over the fact she's a member of the LGBTQIA community.

.@Caitlyn_Jenner says her family has been “very positive” about her gubernatorial run in California: “I have had absolutely no pushback because I’m a member of the LGBT community, particularly the trans community. No pushback whatsoever... I’m running as an inclusive Republican.” pic.twitter.com/xjRU35ib4R

Toward the end of the interview, Hostin also brought up Jenner's voting history, or lack thereof.

"My question to you is why should California voters vote for you when my understanding is, in the last 20 years, you did not vote in 2/3 of elections and although you told CNN’s Dana Bash that you hadn't voted in the 2020 election, you actually did vote in the 2020 election, you cast a mail-in ballot," said Sunny. "So you haven't really been engaged in the civic process, why should California voters believe in you?"

"Because I'm the best person for the job," she replied. "I am a common sense person. I also attract a lot of good people. I would also do everything for the people of the state," she continued, before taking aim once again at Newsom.