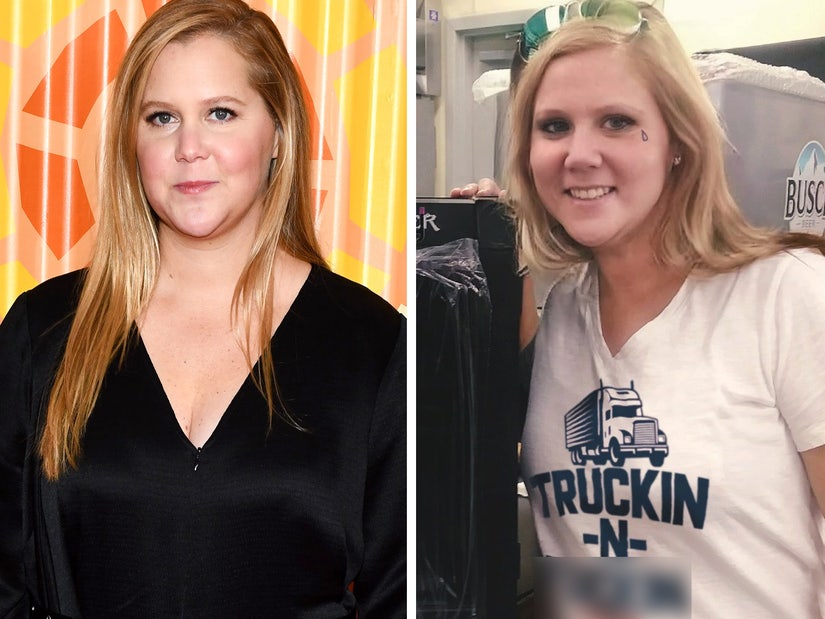 "Amelia" claimed she didn't murder anyone, despite her teardrop tattoo.

Amy Schumer appeared just as baffled as the rest of the Twitter-verse when an account shared an image of a woman in a truck stop that looked very much like the comedian.

On Wednesday, Celina 52 Truck Stop posted the shot of "Amelia" posing with a mini-fridge that the account claimed she won at the alleged Tennessee gas station. Sporting a teardrop tattoo and a "Truckin-n-F-----" tee while standing under a sign that read "Stop pooping in our parking lot," Amelia quickly went viral, with fans pointing out her likeness to the "Trainwreck" star.

Prize winner Amelia wanted us to point out that her teardrop tattoo is not because she murdered anyone.

She accidentally killed a pedestrian once after falling asleep at the wheel and got the tattoo to honor their memory. pic.twitter.com/Yb2fCibxLS

Upping the ante on the bizarreness, the account then went on to clarify Amelia did not commit homicide.

"Prize winner Amelia wanted us to point out that her teardrop tattoo is not because she murdered anyone," read the tweet. "She accidentally killed a pedestrian once after falling asleep at the wheel and got the tattoo to honor their memory."

With a lot to unpack in the posts, Schumer naturally responded by writing, "Wait, what’s going on at a truck stop? -me 😢"

While the shenanigans created quite a stir online, the website Snopes appeared to call it out as just that: shenanigans.

"The 'Celina 52 Truck Stop' isn't a real truck stop," the fact-checker stated. "They write on their Facebook page that they are a 'satire / parody' site."

Snopes also pointed out that the account has previously doctored photos and fabricated stories, as they once used a photo of NHL player Phil Kessel holding a hockey puck to portray "Phil" who won a can of tobacco.

According to the myth-busting site, it all appears in good fun and a way to sell T-shirts, as Celina 52 Truck Stop shared a link to buy Amelia's "Truckin-n-F-----" tee hours after the original post.

We are Tennessee's only Constitutionally Exempt Truck Stop (we have authority to create our own laws at our property). Come see the difference today. #freedomisntfee pic.twitter.com/kTZ5CryTuD

However, Celina 52 Truck Stop fired back at Snopes, in what appeared to be perfectly suitable responses for an alleged satire site.

After first tweeting, "Enjoy your lawsuit for lying," the account followed up with "If @snopes has never been to our truck stop how can they say it's not real exactly they can't."

The account then changed their bio to "The only truck stop serving the Weaber Valley Region. We are a real place don't believe Snopes."

The account also referred to an article by The New York Post -- which stated it could not verify any claims made by an alleged Celina 52 Truck Stop employee -- as "fake news."

In the end, it's difficult to make an argument for the account not being satirical when they shares posts claiming the U.S. Constitution doesn't apply to their truck stop.