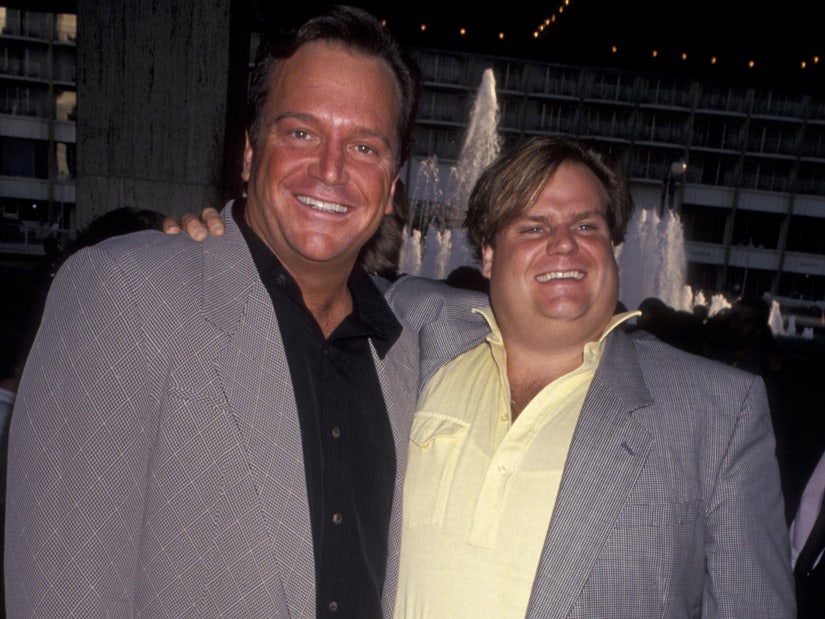 He also reveals what Farley did to get them kicked out of Arnold's own bachelor party and the pep talk he gave the SNL star about that infamous Chippendales sketch.

Tom Arnold got real about his relationship with Chris Farley during an interview with Howard Stern this week, revealing he was once the "Saturday Night Live" star's sponsor while opening up about how they became friends.

According to the "True Lies" star, he and ex-wife Roseanne Barr "loved" the impressions Farley and Victoria Jackson did of them on SNL and when they were in town for some kind of hosting gig, he got a call from Lorne Michaels.

"Lorne Michaels called me and said, 'You have a lot in common with Chris Farley. Would you please spend time with him?'" Arnold recalled. "He wanted to be sober and I think Lorne was really worried about that, so I was his sponsor for a few years."

Saying the two were "very close," he recalled bonding over their love of football. Arnold said Farley would often stay with him in Los Angeles whenever Chris would come out to appear in one of Tom's comedy specials. "He liked to have fun and he had too much fun," Arnold said, adding it was "very sad when he died."

Farley had a long battle with substance abuse and eventually died from a morphine and cocaine overdose in 1997 at the age of 33. His brother, John, found Farley dead in his Chicago apartment.

When Stern said it must have driven Arnold "crazy' that he "couldn't stop him from abusing himself," Tom said Chris was "on his way to his 17th rehab" stint at the time. "It's also frustrating because at certain points he'd be like, 'I'm not going to be around Tom because I don't want him to see.'"

"I always told Chris, you can't be fat and do drugs, you just can't. You gotta pick one," he added. "I can speak from experience. Pick one, you can't do everything."

Farley wound up being Arnold's best man at the actor's 1995 wedding to Julie Lynn Champnella. Tom told Howard that they had a bachelor party at Scores strip club -- where Chris stole the spotlight.

"What happened was, all the guys, David Spade was in the wedding, there was a lot of guys and Farley disappeared," he recalled. "He then came up on stage naked and then they ended up kicking everybody out. He's a big guy and he did not mind being naked."

That story, of course, reminded Stern of one of Farley's most memorable sketches: The Chippendales Audition. The sketch featured Farley and guest Patrick Swayze compete for a slot in the all-male revue while stripping and showing off their moves to Loverboy's "Working for the Weekend."

"He called me that week and said, 'I am so embarrassed. They wrote me this thing, it's embarrassing because I'll be the fat guy next to Patrick Swayze, what do you think?'" said Arnold. "I think if you could be the funniest fat guy ever doing this thing, then you should do it and you should really go for it. He was naked a lot. There's no shame in his game."

Both Chris Rock and Bob Odenkirk spoke out about the sketch in question in Farley's 2009 biography "The Chris Farley Show." Rock said the sketch was "a weird moment in Chris' life." He added, "As funny as that sketch was, and as many accolades as he got for it, it's one of the things that killed him. It really is. Something happened right then." Bob Odenkirk, who was a writer on "SNL" as well, also said the sketch was "f---ing lame" in the book, adding, "I can't believe anyone liked it enough to put it on the show. F--- that sketch. He never should have done it."

Show writer Robert Smigel defended the sketch earlier this year on Stern, however, saying Farley "had this fantastic energy and, in a way, it was a very empowering sketch and I think that's what people felt the first time they watched it."