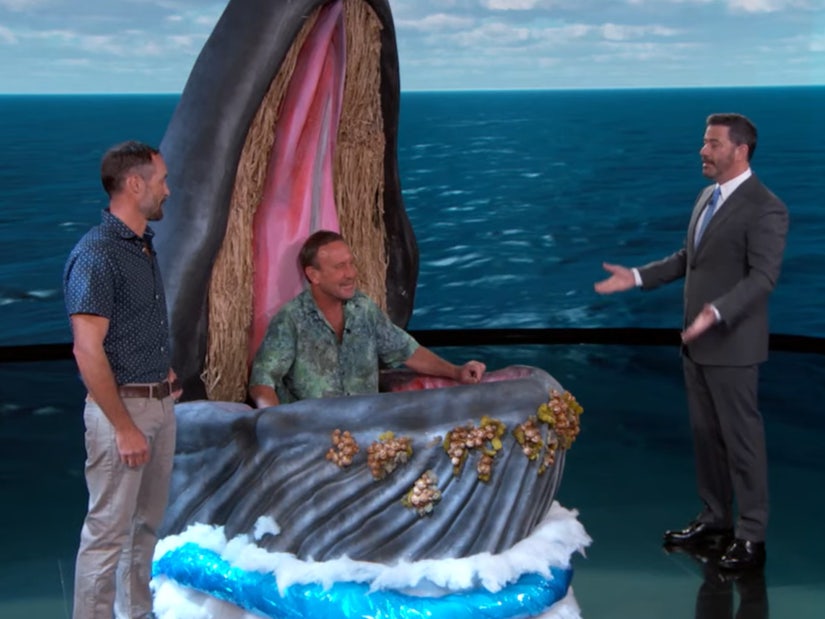 The Cape Cod lobster diver who wound up inside the mouth of a whale does it again for Kimmel.

Captain Michael Packard of Eastham, Massachusetts returned to the mouth of a whale on Wednesday night during an appearance on "Jimmy Kimmel Live!" -- just days after making it out of the real thing alive while lobster diving on Cape Cod.

Last Friday, Packard was in the middle of a dive to retrieve lobsters from the ocean floor, when he claims he was "swallowed" whole by a humpback. He was hospitalized and released the same day, with soft tissue damage but no broken bones. After making national headlines for the incident, Packard and First Mate Josiah Mayo were flown out to Los Angeles by Kimmel to appear on his show -- with the Captain doing the interview from inside the mouth of a prop whale.

"I thought about it and I was like, 'No way am I getting in that. I'm going back to Cape Cod!" Packard exclaimed at the top of the interview. "But then I thought about it harder like, you know what, it's the perfect celebration of life. I survived! My two boys are home watching this."

He also wanted to clarify that, despite reports to the contrary, he "wasn't swallowed," he was simply inside the whale's mouth. "Let's get that straight!" he added.

Mayo explained what he witnessed from the boat after Packard went down for a dive, saying he started seeing splashing all over the water and thought it was "that shark attack we're always worried about." He then noticed "whale parts," before Michael "shot out of the water."

"When it first happened, like Josiah said, I was descending, I almost got to the bottom, I was at about 35 feet and I just got hit by a freight truck, Bam!" explained Packard. "Everything just went instantly dark and I'm just moving, traveling fast through the water."

He recalled thinking to himself, "What the heck, did I just get eaten by a shark? No, shark's mouths aren't that big, I don't feel any teeth. Great, I didn't get eaten by a shark." He then realized he was inside a whale's mouth and started kicking and banging around. "[I'm] just thinking, there's no way I'm going to get out of this unless he decides to let me go. I'm dead," he added.

After about 30-40 seconds inside the whale, he got free and was pulled back onto the boat. He thought his leg was broken. "First thing I said was, 'I was in the f---ing whale's mouth!'" said Packard.

The Captain has already done quite a few interviews about his experience, including a Reddit AMA where he revealed he wanted Matt Damon to play him in any possible film adaptation. Damon, of course, is Kimmel's mortal enemy -- forcing him to ask, "I wonder why you would aim so low." He joked, "And if he does play you, can the whale eat him? Can that be his final destination?"

While Kimmel noted he was skeptical about the story at first, he didn't feel like the guys were lying when he started seeing their TV appearances.

After getting a few gifts from Kimmel -- including a "Free Willy" DVD, whale repellant and a t-shirt reading, "Kiss Me I Got Swallowed By a Whale" -- Packard offered one final message for the whale itself.

"I want to apologize to the whale for getting in his way," he said, "And I won't ever do it again."