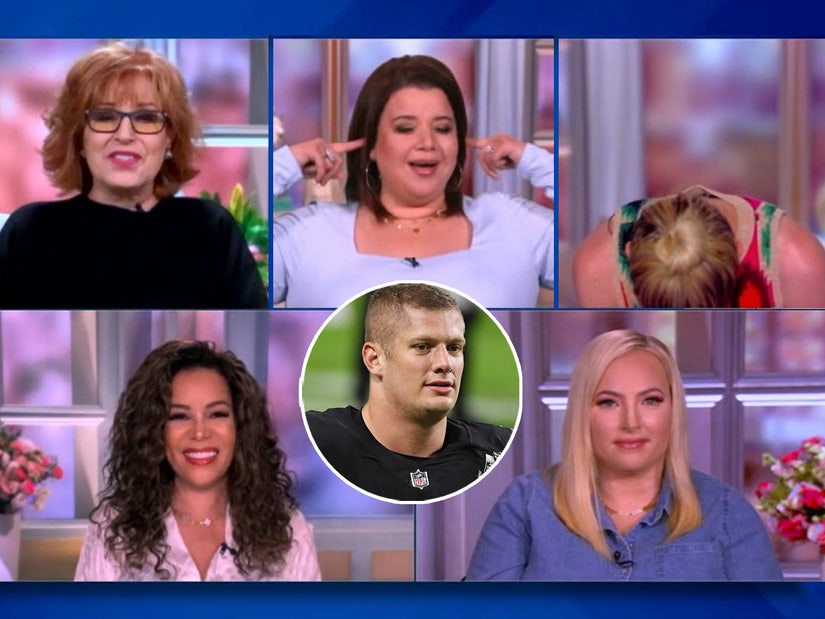 Joy Behar made a cringeworthy remark in relation to NFL player Carl Nassib's coming out this morning on "The View" -- one she quickly realized was "inappropriate" and tried to walk back later in the hour.

The women were discussing the Las Vegas Raiders' defensive end's coming out video from the previous day on Tuesday's episode of the morning show when Behar made the offensive comment.

After asking the panel if his coming out is still "such a big deal" in 2021, both Sara Haines and Ana Navarro explained why it is an important statement to make in a sport filled with "toxic masculinity" and the representation that comes with him being the first openly gay, active athlete in the NFL.

Yikes! This joke from Joy Behar during a discussion of the first active gay player in the NFL.

"After they said penetration in the end zone, they lost me!" pic.twitter.com/GJgqTtL5yO

Ana, however, couldn't remember who he played for, asking the other women if they knew. "Don't ask me, you're asking the wrong person," said Behar -- who then added, "Ana, after they said penetration in the end zone, they lost me!"

With the remark, Ana blocked her ears, Sara put her head down and Sunny Hostin smiled through it, shaking her head before throwing up her hands.

Joy Behar tries to walk it back at the end of the segment.

By the way, that inappropriate joke I made for daytime television, scratch it. Make believe I never said it." pic.twitter.com/z4klo7CXBc

After both Sunny and Meghan gave their takes on the topic, Joy threw to commercial -- but not without first trying to walk back her earlier comment.

"I just long for the day when you can just be gay in the world, and it doesn't become a big deal," she said. "By the way, that inappropriate joke I made for daytime television? Scratch it. Make believe I never said it."

In a video posted to Instagram on Monday, Nassib said he "finally" felt "comfortable enough" to come out. "I really have the best life, I've got the best family, friends and job a guy could ask for," he added.

"I'm a pretty private person so I hope you guys know that I'm really not doing this for attention. I just think that representation and visibility are so important," he added. "I actually hope that like one day, videos like this and the whole coming-out process are just not necessary. But until then, I'm going to do my best and do my part to cultivate a culture that's accepting, that's compassionate and I'm going to start by donating $100,000 to The Trevor Project."

"They're an incredible organization, they're the Number 1 suicide-prevention service for LGBTQ youth in America," he added. "And they're truly doing incredible things. And I'm very excited to be a part of it, help in any way that I can and I'm really pumped to see what the future holds."

Watch his video below: