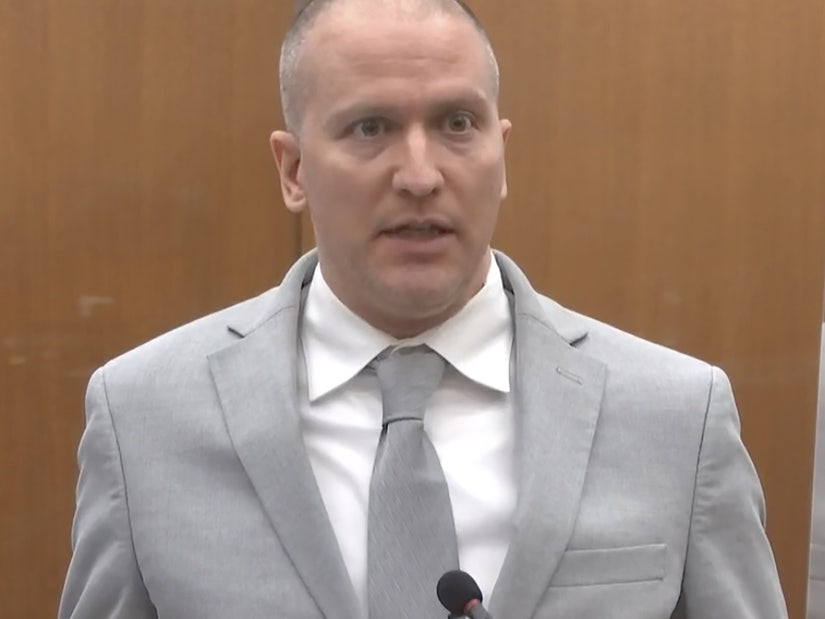 Derek Chauvin learned his fate on Friday -- and the reaction in Hollywood was mixed.

The former Minneapolis police officer was sentenced to 22.5 years in prison for the murder of George Floyd, whose filmed death sparked a worldwide movement against racial injustice.

The sentence fell short of the 30 years requested by prosecutors, but went beyond the 12.5 year sentence prescribed under state guidelines.

With good behavior, the 45-year-old could be paroled by his 60th birthday.

Reaction to the news in Hollywood was mixed; some felt it was too lenient, while some described it as a win; others still appeared to simply accept it with muted helplessness:

Derek Chauvin is a murderer.

A murderer who watched multiple people plead for the life of the man he killed in broad daylight.

A murderer who placed the full weight of his body on another human being’s neck and felt the life drain out of him.

Derek Chauvin is a murderer.

I mean, it’s won’t bring Mr. Floyd back, it’s not real justice, but this is good, right? https://t.co/5IKEc2Alsk

Derek Chauvin sentenced to 22.5 years in prison for murdering George Floyd. That’s double the sentence Mohamed Noor got, and far more than the laughable probation the defense asked for.

Chauvin’s attorney just said Chauvin’s brain is “littered with what-ifs.” For example, what if I just didn’t come into work that day? How about . . . what if I had simply stood up, simply raised my knee off George Floyd’s neck? That the only what-if that matters. #JusticeMatters

Sorry mama chauvin ,your son is NOT a good man.

22.5 YEARS! This historic sentence brings the Floyd family and our nation one step closer to healing by delivering closure and accountability.

Understand Chauvin’s
Mom Not Wanting Her Son 2 Be Gone,But GEORGE FLOYD’S MOM WILL “NEVER” SEE HER SON AGAIN💔.Chauvin’s Lawyer Said”If Only He Hadn’t Gone 2 Work That Day,Answered That call.”
I SAY”IF ONLY HE HADNT PUT HIS WEIGHT ON GEORGE’S NECK FOR 9 MINS.HE HAD 9 MINS
2 STOP

BREAKING: The moment George Floyd’s killer cop Derek Chauvin heard he was being jailed for 22.5 years for his despicable crime.
Rot in jail you callous pr*ck. pic.twitter.com/erYEcOhnYI

..but what has been done to stop the systems in place from having a tragedy like this happen again? https://t.co/MI8IUem32G

If you’re wondering if Derek Chauvin’s sentence is fair, Chauvin will be 60 years old when he’s released from prison after serving 15 years of his 22 1/2-year sentence. George Floyd was murdered by Chauvin when he was 46. Floyd can never resume his life. Chauvin can.

I am praying for the Floyd family.

And I know that this sentence, no matter the length, does not ease the family’s pain.#GeorgeFloyd #ReimaginePublicSafety #SaveLives #FierceUrgencyOfNow pic.twitter.com/8YcWDduvTl

22.5 years is not enough for Derek Chauvin MURDERING George Floyd in broad daylight when we have people serving life sentences for non violent crimes

Derek Chauvin was just sentenced to 270 months (22.5 years) for the murder of George Floyd.

As a public defender, I represented a man who was facing life in prison for stealing a jacket.

I mean... Derek Chauvin's mom just said that she's read letters from around the world that "also believe in your innocence."

Which... like... what those letters are saying is not that he's innocent but that choking Black people to death is no crime.