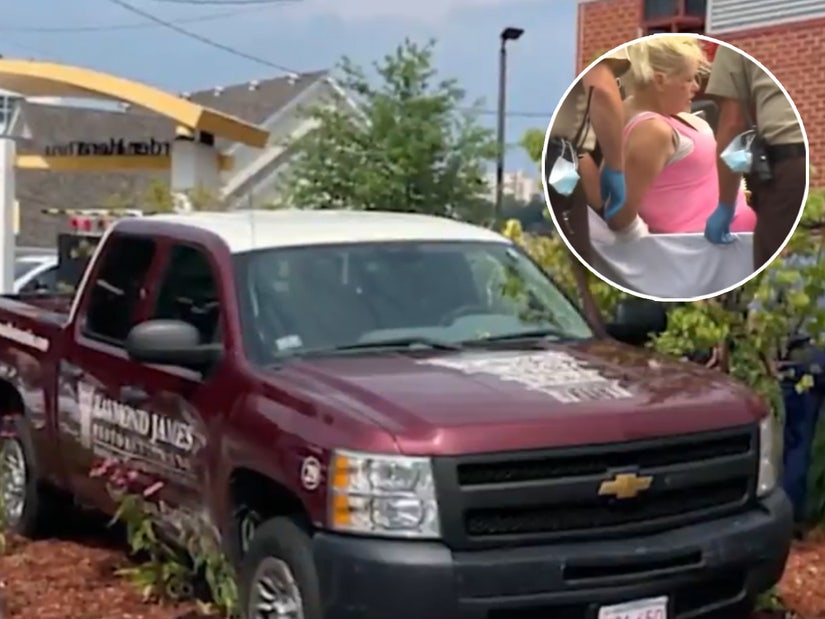 She would've gotten away with it too — if it weren't for those pesky irresistible Dollar Menu items.

A wild two-hour police chase in Massachusetts only ended when the suspect stopped... to order drive-thru.

Johanna Gardel, 38, is facing a multitude of charges after she allegedly stole a truck, rammed motorists, and ran over police officers, all before stopping for a mid-pursuit bite to eat at McDonald's.

Worcester Police officers were alerted to the theft around 8:45 AM on Tuesday; a worker for a masonry and restoration company called 9-1-1 to report that a female stranger had jumped into his crimson and very-easily identifiable company pick-up truck at a job site, and sped off.

En route to the scene, officers were flagged down by another motorist to report his car had been struck by the very same erratically-driving truck.

Police spotted the stolen pick-up stopped on Charlton St; but when they activated their lights and got out to walk towards it, the truck suddenly pulled off, and a low-speed pursuit began.

The truck began to pick up speed, running several red lights as she allegedly refused to pull over. For safety reasons, the officer backed off and deactivated his lights and siren.

But it didn't discourage her reportedly dangerous driving; approaching heavy traffic, she veered into the opposite lane into oncoming traffic in an attempt to go around it, running into a van in the process, per authorities. Three officers ran to the truck at this point in an attempt to extract her, but she threw the vehicle into reverse and backed up at high speed, ramming the cruiser behind her and striking one of the officers, who was dragged alongside the truck.

Police cruisers once again gave chase at low speed, but once again were ordered to back off for safety reasons.

It wasn't until the driver stopped at the drive-thru at McDonald’s on Shrewsbury St and attempted to order food, did the chase finally come to an end: when two police cars approached her, she intentionally rammed one before trying to make her escape over an embankment in the parking lot, but the truck became stuck in the mulch, according to police.

Officers were finally able to approach the stranded truck and pull her out of it, as she reportedly fought and struggled the whole time.

She was placed in handcuffs and taken away strapped to a stretcher.

The officer who was struck by the vehicle was injured and transported to hospital, but his injuries are not life-threatening.

Police did not say what Gardell ordered at McDonald's, or whether or not she received it in time.