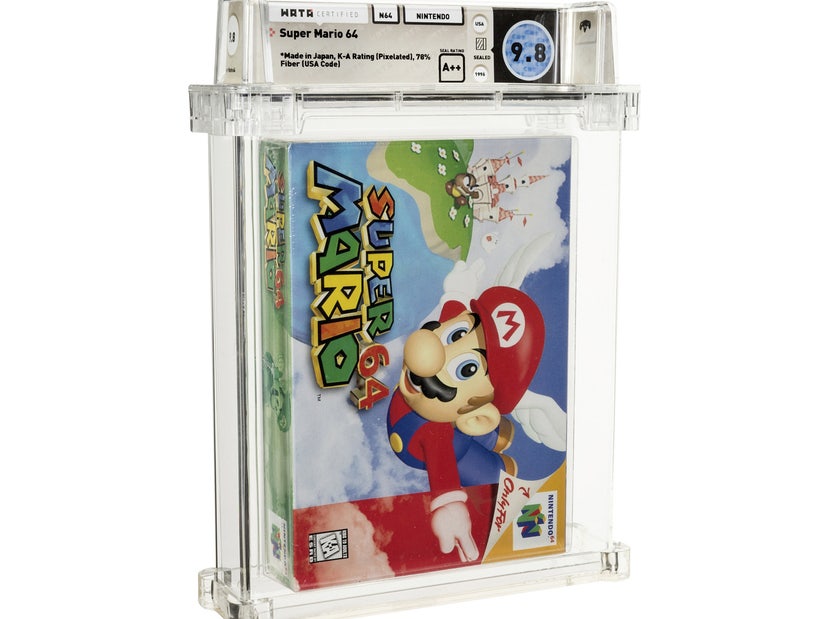 The sale marks the highest price paid for a video game in auction history.

Super Mario 64 quickly became one of the most popular video games ever when it was released in 1996 but if you're trying to get your hands on a copy of the game today, you’re about to pay a whole lot more than you would have in the '90s.

Over the weekend, an unopened copy of the beloved Nintendo game was sold for $1,560,000 in an auction, smashing previous records held for the most expensive sale of a single video game in history. In less than six minutes, bidding at Heritage Auctions easily escalated over the million dollar mark.

"It seems impossible to overstate the importance of this title, not only to the history of Mario and Nintendo, but to video games as a whole," Heritage Auctions Video Games Specialist Valarie McLeckie said in a statement.

The vintage game was not only one of the best-selling games ever for the N64 console but also marked Mario's debut appearance in a 3D world, laying the groundwork for many other subsequent 3D video games.

On top of its cultural significance, the unopened game sold at the auction was in near mint condition, receiving a 9.8 A++ rating from video game grading company WataGames. There are reportedly fewer than five sealed copies in this grade in circulation.

The identity of exactly who was able to drop over a million dollars on the game is unknown but the hefty price tag shouldn’t come as a surprise to potential buyers considering other massive sales made in the video game space in recent times.

Just two days before the Super Mario 64 sale, a copy of Nintendo's The Legend of Zelda broke records when it was sold at auction for $870,000. And back in April, Heritage Auctions sold an unopened copy of Super Mario Bros that had been sitting in a desk drawer since the '80s for $660,000. Both sales had previously held the title for most ever paid for a video game.

Even Goodwill is reaping the benefits of skyrocketing video game prices after selling a copy of Air Raid, one of Atari 2600’s rarest games, for over $10,000 in an eBay auction.

Based on the upward trend of vintage game sales, it sounds like it's about time to search the attic for any unopened video games!