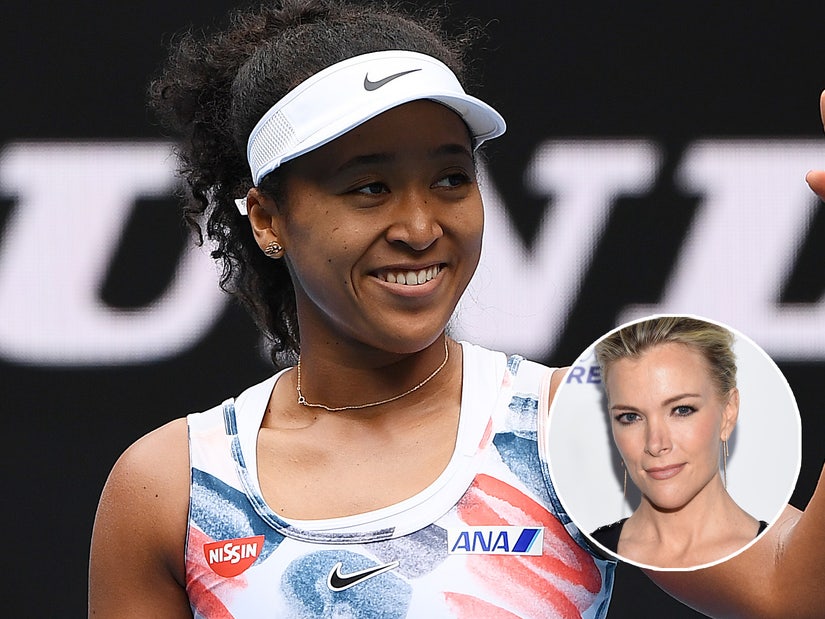 "Your first reaction is to hop on here and spew negativity."

Tennis superstar Naomi Osaka hit back at Megyn Kelly's criticism of her new Sports Illustrated Swimsuit cover on Monday -- before deciding to simply straight up block the conservative host on Twitter instead.

The social media rally went down after fellow conservative and Fox Sports Radio host Clay Travis first reacted to Osaka's cover by basically calling her a hypocrite. "Since saying she's too introverted to talk to the media after tennis matches, Naomi Osaka has launched a reality show, a Barbie, and now is on the cover of the SI swimsuit issue," tweeted Travis, referring to Osaka's self-titled Netflix series.

Earlier this year, the 23-year-old pro announced she wouldn't participate in mandatory press during the 2021 French Open and was fined for refusing to hold a press conference after her first match. She eventually withdrew from the competition entirely, revealing in her withdrawal announcement that she's "suffered long bouts of depression since the US Open in 2018," called herself an introvert and said she gets "huge waves of anxiety before I speak to the world's media."

Osaka also withdrew from Wimbledon last month, with her agent saying she would be "taking some personal time with friends and family" but would be "ready for the Olympics" in Tokyo -- where she'll represent Japan.

Megyn Kelly retweeted Travis' initial post on Monday and piled on by adding, "Let's not forget the cover of (& interview in) Vogue Japan and Time Mag!" -- a sentiment which caught Osaka's attention.

In a since-deleted post, Osaka retweeted Kelly and wrote, "Seeing as you're a journalist I would've assumed you would take the time to research what the lead times are for magazines, if you did that you would've found out I shot all of my covers last year." She then added, "do better Megan [sic]."

Osaka eventually deleted the message and apparently went on to block Kelly altogether. Megyn shared a screenshot of the alleged blocking to her own page, adding, "Poor @naomiosaka blocked me while taking a shot at me (guess she's only tough on the courts). She is apparently arguing that she shot her many covers b/4 publicly claiming she was too socially anxious to deal w/press. Truth is she just doesn't like Qs she can’t control. Admit it."

Kelly wasn't the only one Osaka cleansed from her timeline. Piers Morgan retweeted Megyn's post and claimed, "Yep, and she just blocked me too. The only media Ms Osaka wants to tolerate are sycophantic magazine editors telling her how perfect she is."

Fellow tennis great Martina Navratilova had Osaka's back though, reposting Megyn's post about the block and adding, "Asshole much, Megyn?!? You have no idea what you are talking about. But go ahead - take your shot. It missed badly!!!"

Kelly, for her part, responded to Navratilova's tweet by criticizing Martina reacting to George Floyd's murder by tweeting "Time to riot everywhere!!!!"

After some backlash at the time, Navratilova deleted the tweet -- but later defended her choice of words. "To all those who have an issue with me calling for riots everywhere - please look up the many definitions of riot," she wrote. "This is not a call to any violence whatsoever - for example this a definition of riot 'an unbridled outbreak, as of emotions, passions, etc.' So simmer down!!"