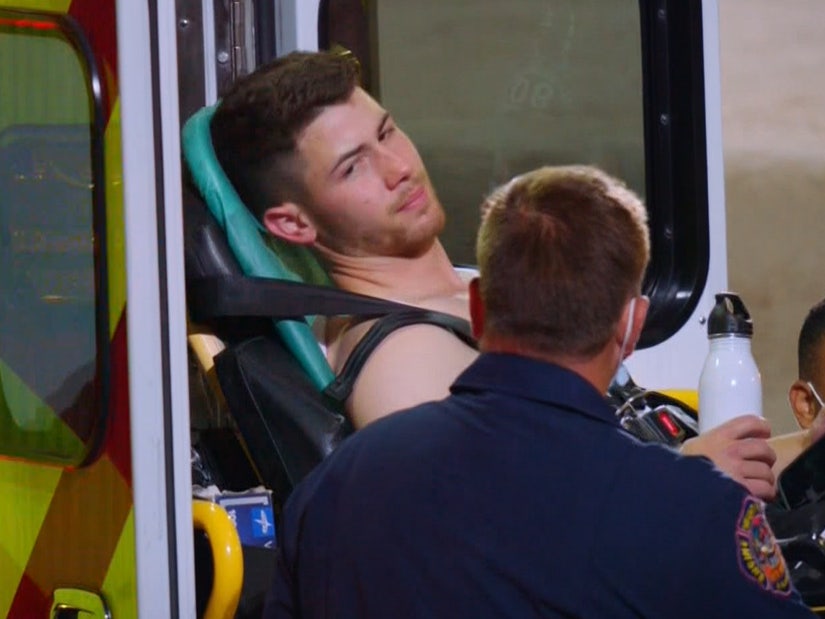 Brothers Joe and Kevin collided with Nick during the brutal pileup.

Nick Jonas suffered a brutal crash during a BMX challenge that caused the singer to be hospitalized for a fractured rib.

On Wednesday's NBC special "Olympic Dreams Featuring the Jonas Brothers," footage shot months earlier showed Nick wiping out on the bike course while racing his brothers Joe and Kevin, who ended up colliding into their younger sibling as well.

📹 A gif of Nick Jonas falling from his bike and getting a broken rib during the third round of #OlympicDreams.

"I think the tape kind of speaks for itself," Nick said at the end of the special. "I always give 110 percent, and sometimes that gets you the gold. In this case, it got me a fractured rib, bruised tailbone, and a hospital dinner. But I'm recovering."

After being coached by two-time Olympian in BMX racing Alise Willoughby, the Jonas brothers took to the tricky race track, where Nick slid going up a hill, lost control of his bike and tumbled head over heels. Joe and Kevin couldn't avoid the crash and fell off their bikes immediately following Nick.

Soon an ambulance arrived to take Nick to the hospital.

At the time of the injury back in May, Nick explained what caused the fall to ET, saying, "Something just got caught, dirt on the bike and just tumbled. But again, I feel good, surprisingly, all things considered. I was back in my 'Voice' chair right away, kind of said, 'Listen, I'm not going to let this slow me down.'"

Check out the whole crash here.

The BMX spill wasn't the only fall Nick suffered. Earlier in the program, he took a tough tumble while racing against his brothers in a hurdle competition (below).