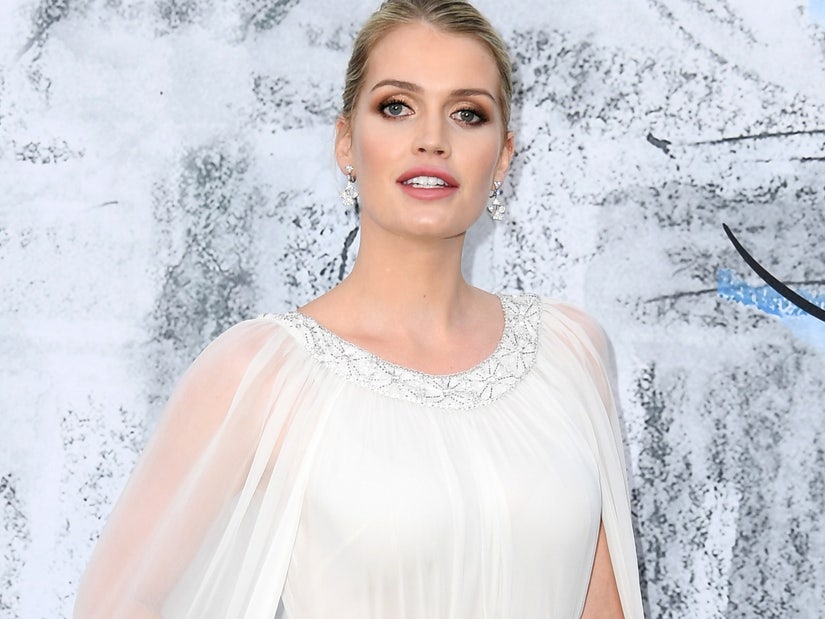 Lady Kitty Spencer, the 30-year-old niece of Princes Diana and cousin to Princes William and Harry, got married to Michael Lewis over the weekend in Italy.

The model said "I do" in a collection of dresses from Dolce & Gabbana on her big day, with the fashion house sharing three official photos of her looks to social media on Sunday.

"A glimpse at the #AltaModa gowns created exclusively by Dolce&Gabbana for @kitty.spencer on the most important day of her life," the designers captioned a photo of her dress for the ceremony. The lace bridal gown had a Victorian inspiration, said D&G of the stunning gown, which featured a high neck and giant train and veil.

In another photo, she's seen wearing an "illusion baby-blue tulle gown and cape embroidered with cross-stitched flowers" while sitting at a table -- perhaps for the rehearsal dinner or reception -- while a third photo shows her in a "a double organza hand-painted silk gown embellished with flowers and crystals."

The designers also shared a video to Instagram showing all the various fittings for her many looks, giving a glimpse of other, equally-beautiful dresses D&G worked on for her nuptials.

Spencer and Lewis, a 62-year-old fashion mogul, tied the knot at Villa Aldo Brandini in Frascati, Italy. The two, who got engaged back in January 2020, have dated for more than two years.

Kitty is the oldest daughter of Charles Spencer, Princess Diana's brother. He has six other children -- three of whom walked their sister down the aisle for the ceremony.

According to the Daily Mail, guests included Pixie Lott and Idris Elba's wife Sabrina. It does not appear her cousins, William and Harry, attended -- though she was present at both of their weddings.

Spencer has a relationship with Dolce & Gabbana that goes back a few years now, after the model hit the runway for them back in 2017. Since that first show, she's walked for the brand a couple of times or has been a staple in the front row of their shows.