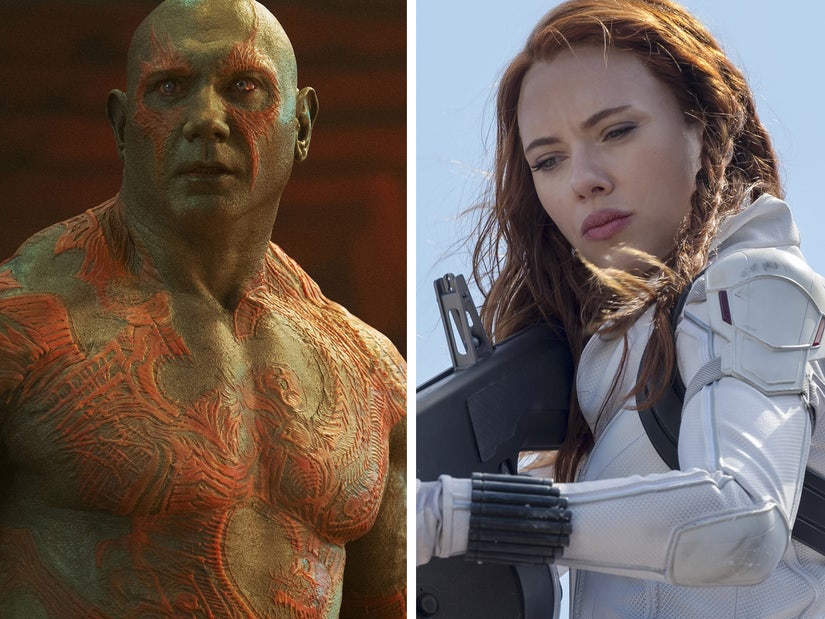 Everyone else in the MCU, however, has remained tight-lipped over the legal battle.

There's a major battle going down between Scarlett Johansson and Disney over the profits from "Black Widow" -- but Marvel star Dave Bautista joked the whole thing could have been avoided if they'd just listened to him instead.

In a tweet fired off on Friday morning, Bautista -- who plays Drax the Destroyer in the "Guardians of the Galaxy" films and appeared in both "Avengers: Infinity War" and "Endgame" -- shared an article about ScarJo's lawsuit and added, "Told em they should've made a #Drax movie but noooooo!"

The actor said he has lobbied for a solo film in the past, but didn't believe it would ever happen. "Even if it's not me portraying Drax, I just think it is an interesting story to tell," he previously told MTV UK.

Told em they should’ve made a #Drax movie but noooooo! 🤷🏻‍♂️ https://t.co/uuvkCU5vAI

Thus far, nobody else in the Marvel Cinematic Universe has chimed in on the legal battle.

Johansson made headlines on Thursday when she sued Disney, alleging they broke her contract for "Black Widow" by releasing it in theaters and on Disney+ with Premier Access simultaneously. She claims that decision to drop it on streaming cost her backend profits she would have earned had the movie only been given a theatrical release.

According to Johansson, when she reached out to Disney to try and renegotiate her contract once the streaming decision was made, she was met with radio silence.

It's similar to the challenge Warner Bros. faced when they decided to simultaneously release all of their 2021 films on HBO Max and in theaters, a trend they began with "Wonder Woman 1984" in December 2020. Warner Bros., however, reportedly renegotiated with its talent and shelled out more than $200 million to make good on backend deals.

"The lawsuit is especially sad and distressing in its callous disregard for the horrific and prolonged global effects of the COVID-19 pandemic," Disney said in a statement. "Disney has fully complied with Ms. Johansson’s contract and furthermore, the release of Black Widow on Disney+ with Premier Access has significantly enhanced her ability to earn additional compensation on top of the $20M she has received to date."

In a new statement from Bryan Lourd of Johansson's talent agency, CAA, on Friday, he said Disney "shamelessly and falsely accused Ms. Johansson of being insensitive to the global COVID pandemic, in an attempt to make her appear to be someone they and I know she isn't."

Lourd said the suit was simply "filed as a result of Disney's decision to knowingly violate Scarlett's contract" and accused the company of having "very deliberately moved the revenue stream and profits to the Disney+ side of the company, leaving artistic and financial partners out of their new equation."

Bautista, meanwhile, is nearing the end to his time in the MCU as well. While promoting his campaign with Disney+ for its streaming bundle earlier this week, he told PEOPLE that "Guardians of the Galaxy Vol. 3" will "be the end of my Drax journey."