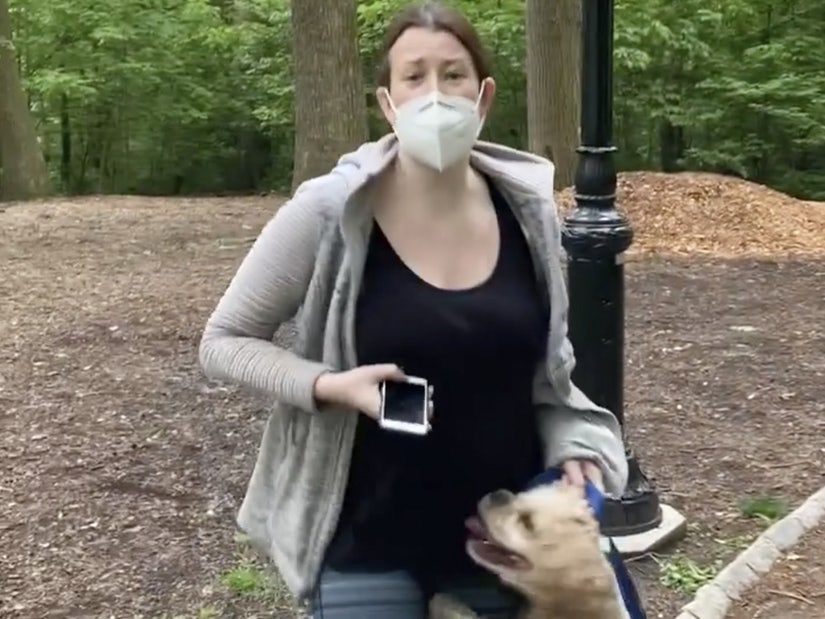 Amy Cooper — AKA "Central Park Karen" — has given her very first interview since that infamous encounter with a bird watcher.

Cooper became the poster girl for Karens everywhere on May 25, 2020 — the same day George Floyd was killed — when she was accused of "weaponizing her white tears" by feigning fear of her life in a 911 call against a Black man who challenged her for not leashing her dog.

In the wake of the viral Facebook post, she was branded a racist, arrested and charged with falsifying an incident report, fired from her job, and ended up fleeing the country.

But in a new interview on Bari Weiss's Honestly podcast, Cooper gives a very different version of events, claiming the man who filmed her — bird-watcher Christian Cooper — had threatened her first, and that his demeanor completely changed the moment he started filming.

In his own post at the time, Christian admitted he approached her first to scold her for letting her dog run off his leash, which is banned under park rules. After telling him twice that the dog runs were closed and the dog needed exercise, and that it was too dangerous for the dog outside of the bramble, he told her: "Look, if you're going to do what you want, I'm going to do what I want, but you're not going to like it."

At this point, he said he pulled "the dog treats I carry for just for such intransigence" and attempted to coax her dog over, and apparently led to her screaming "DON'T YOU TOUCH MY DOG!!!!!" — which is when the recording starts.

"I'm trying to figure out what that means? Is that a physical attack on me? An attack on my dog?" Amy claimed in the podcast, as reported by Daily Mail. "What is he about to do?"

"Before I could even figure out how to process this, he pulls out dog treats [from his fanny pack] and I'm like "What the heck is this guy doing?'"

"I look up and he's holding these dog treats in one hand and a bike helmet in his other hand and I'm thinking, 'Oh my god, is this guy going to lure my dog over and try to hit him with his bike helmet?' And if I end up over there am I going to get hit by this bike helmet?"

Meanwhile, on the podcast, Amy said of calling the cops, "I don't know that as a woman alone in a park that I had another option."

"I'd explored all my options. I tried to leave. I tried to look for anyone who's around,' she claimed. "There was no noise, no sound."

"And it was, you know, it was my last attempt to sort of hope that he would step down and leave me alone."

But she claimed when she did call, his demeanor quickly changed from threatening, to threatened.

"It's really weird because he’s still standing there, you know, same very physical posture, and suddenly out of him comes this voice from man who's been very dominant towards me," she said.

"Suddenly, you know, almost this victimized voicing, [saying,] 'Don't come near me. Don't come any closer.'"

"Like, almost like he's terrified of me … To me that's even more terrifying now because you've gone from screaming at me -- if you kept screaming at me, at least it was consistent, but now his whole verbal demeanor has changed."

What became one of the most damning aspects of the exchange was the fact she kept repeating his race over the phone; but Weiss asserts in her article, using audio from the 911 dispatcher's side of the conversation, the line was so bad that the dispatcher could barely hear anything (see YouTube video below).

However, in the viral video (Facebook post above) Amy can be heard saying: "I'm taking a picture and calling the cops. I'm going to tell them there's an African American man threatening my life."

Tuesday's podcast interview also differs from the remarks Amy made after the video went viral last year. At the time she said she had overreacted and apologized.

"When I think about the police, I'm such a blessed person," she stated to NBC New York. "I've come to realize, especially today, that I think of [the police] as a protection agency, and unfortunately, this has caused me to realize that there are so many people in this country that don't have that luxury."

Shortly after the incident Amy's employer — investment firm Franklin Templeton, where she earned upwards of $170k per year — fired her after claiming it carried out a thorough investigation and "determined indisputably" that she was a racist.

She is suing for race and gender discrimination, defamation, and intentional infliction of emotional distress and negligence: her lawsuit includes a testimony from a Black male dog walker who claims Christian Cooper also aggressively threatened him in the park; in that testimony he also claims to know two more fellow dog walkers who were threatened "but don't feel comfortable coming forward because they're white. They think they’ll be seen as some 'Karen' or whatever."