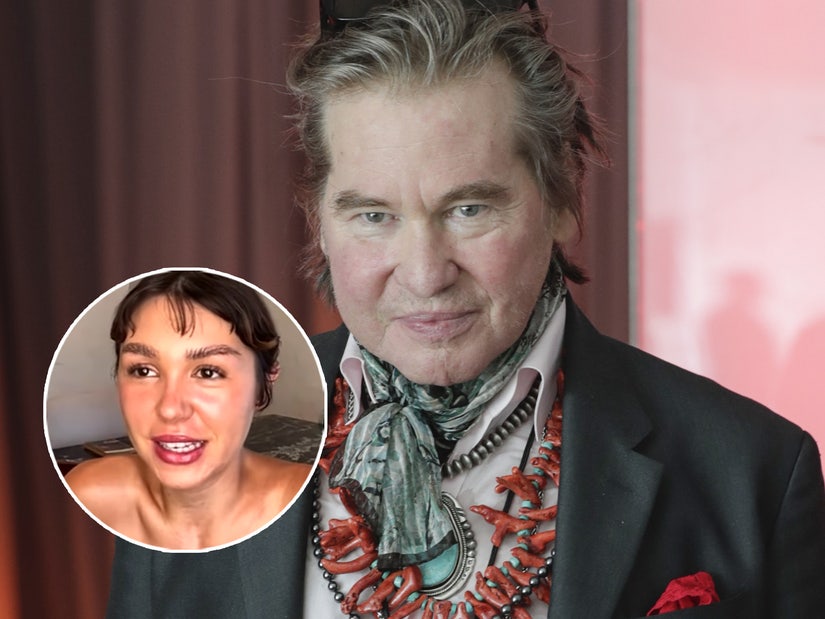 The "Batman Forever" star's daughter, Mercedes, says her father is "doing well" and is "still recovering" following his battle with throat cancer.

Val Kilmer's daughter says her father's cancer recovery is "just as grueling as the actual disease."

While speaking with EXTRA's Rachel Lindsay, the actor's 29-year-old daughter, Mercedes, and 26-year-old son, Jack, offered an update on their father's health following his battle with throat cancer. Kilmer, 61, was diagnosed with the disease years ago and underwent a tracheotomy.

"Everyone has been so supportive; it makes me emotional," Jack said. "It's really beautiful to see people come together."

Mercedes and Jack have been promoting their father's new Amazon documentary, "Val," which chronicles the "Batman Forever" star's childhood, rise to fame and subsequent roller coaster ride of a career, in addition to his battle with throat cancer. The movie uses a number of Val's home videos filmed throughout his entire career. Both Mercedes and Jack are associate producers on the project, while Jack also narrates the entire film as his father. The two also briefly appear in the documentary.

In an interview with Entertainment Tonight, published on Wednesday, Mercedes opened up about watching the documentary, sharing how it felt to see audiences watch the film as well.

When asked which part of the film she found to be the most emotional, Mercedes said, "The entire movie made me emotional. I wouldn't say things surprised me about my dad. He's such an open person that I know very well. But it did really surprise me to see it with an audience. I'm so used to people not understanding my dad. I'm so used to his public image being different than the playful, funny person that we know."

"It did really move me and surprise me to see audiences really see him for the first time," she added. "That was incredible. To see this collage of all of these different lives and selves, to see it narrativized lucidly and to see an audience ... To see our lives made sense of in this two-hour narrative was pretty profound."

Meanwhile, Mercedes and Jack also recently opened to TooFab about working on "Val." The two also detail what it was really like for their father to film "Batman Forever." Check out our interview, below.

"Val" is in theaters now and hits Amazon Prime Video on Friday August 6, 2021.