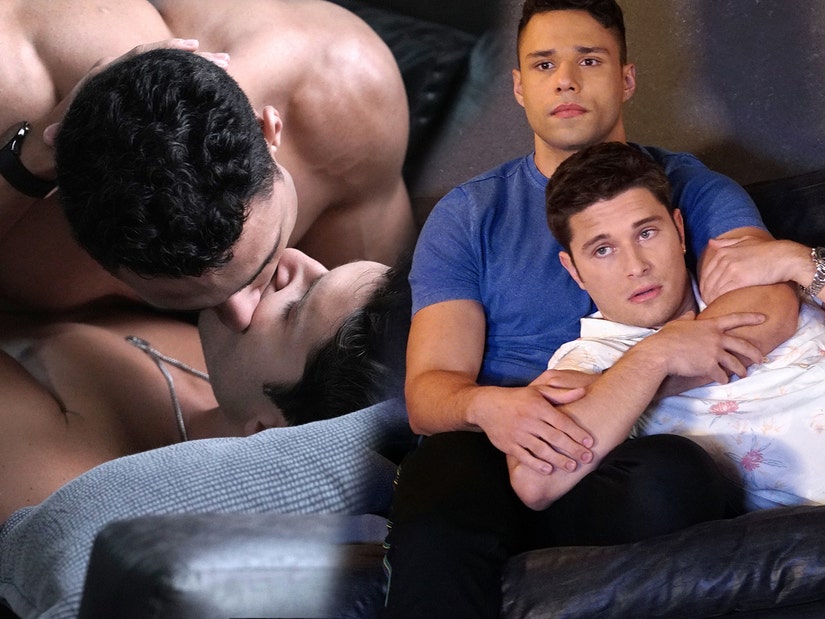 "I know about a couple things coming up and it's gonna blow your minds," he tells TooFab ... before teasing a potential proposal.

While "9-1-1: Lone Star" won't be back on the air until 2022, the self-described "Tom Holland of the Lone Star universe" already has us hyped for its return.

Star Ronen Rubinstein, who plays T.K. Strand on the series is as one-half of the show's incredibly popular "Tarlos" relationship, gave TooFab one helluva tease when we caught up with him following his appearance on one of Ryan Murphy's other series, "American Horror Stories," this week.

"I've gotten the title of being the 'Tom Holland of the Lone Star universe' but I'm gonna say this very carefully: I would buckle up for what's coming with the Tarlos relationship," teases Ronen, joking he's a spoiler-dropper just like Spider-Man.

"I know about a couple things coming up and it's gonna blow your minds," he added. "My jaw was definitely dropped when I found out about certain things. Definitely buckle up everybody!"

Rubinstein has made it no secret he wants his character and Rafael Silva's Carlos to eventually tie the knot, while showrunner Tim Minear recently said "there could be a wedding in their future" -- before adding, "but I'm not sure it's going to be right away." While fans count down the days until that happens, we asked Ronen who he thinks would pop the question -- T.K. or Carlos?

"I always flop back and forth, man. I think, on paper, my instinct is like, T.K. because he's got a big heart and he would do that and would love to make that gesture with Carlos, so Carlos can know how important he is to him," said Rubinstein.

But don't count out Carlos dropping down to one knee either.

"Then again, we've seen really amazing glimpses of Carlos being this big mush and beautifully romantic man and he might have that in his back pocket as well," Ronen continued, before addressing why T.K. might be hesitant. "I remember talking about this with a fan at a convention -- it's like, TK probably still has his proposal in the pilot in the back of his head. There's probably some unresolved scar tissue there. I actually have no idea, man."

As the show heads into its third season as the second highest-rated scripted show -- behind only parent series "9-1-1" -- Rubinstein knows how lucky he is to be on a successful show that's also saying something. The series has been celebrated for its portrayal of not only LGBTQIA+ characters, Tarlos included, but for its diverse cast all around.

"I think about it every single day," he said when asked whether he ever reflects on how different his life is thanks to the series. "I'm very aware of the position I'm in and the blessings that have come my way."

"A show like "'9-1-1: Lone Star,' it's almost like hitting the jackpot as an actor. You get to work on really cool material, you get to work with probably the most important producer in television and people actually watch the show," he continued. "And, not only that, we have record breaking numbers of people watching the show. It checks off all the boxes."

"T.K. is a really important character in the sense of what we're talking about with him and what we're portraying and the topics that we're touching on," added Rubinstein, whose work on the show actually inspired him come out as bisexual earlier this year. "It's such a blessing and it doesn't happen very often -- sometimes it never happens. It's very rare that you can check off all the boxes and I'm just so proud of being a part of it and the evolution of T.K. and it's only gonna get more incredible, I think."

While "9-1-1" will return this fall, "Lone Star" will be back for its third season in January 2022. Ronen's episode of "American Horror Stories," meanwhile, is streaming now on FX on Hulu.