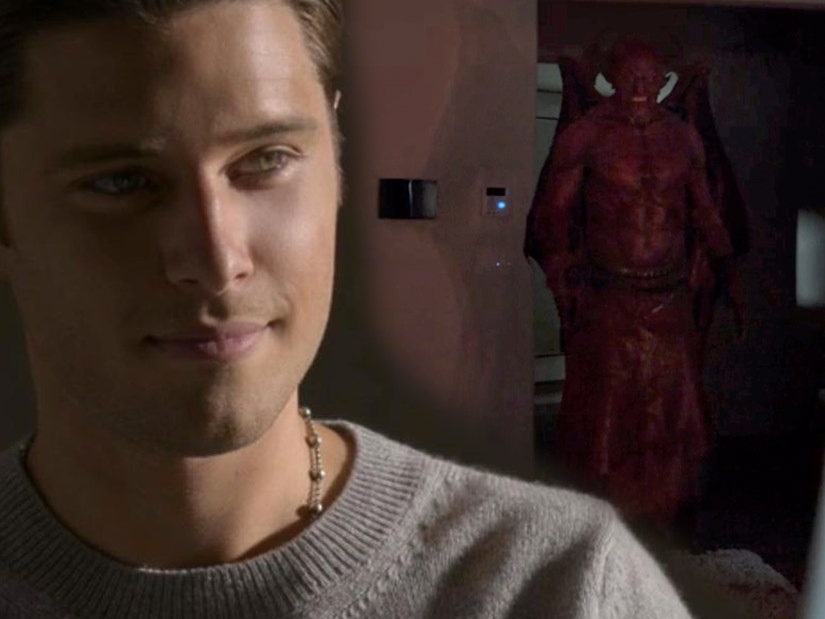 The actor tells TooFab he'll always answer Ryan Murphy's calls -- even for "a role that doesn't have any lines."

Ronen Rubinstein went from being on "9-1-1: Lone Star" to needing to call 9-1-1 on the latest installment of "American Horror Stories."

While not a newcomer to the Ryan Murphy-verse -- Murphy also created "9-1-1" and its Texas-based spinoff -- Rubinstein made the jump over to the spookier side of town this week.

Appearing opposite "Horror Story" alum Billie Lourd, the two played a young couple with fertility issues. After giving birth, the bulk of the hour was spent with Liv (Lourd) struggling to connect to her baby, growing more and more convinced that the totem she'd used to get pregnant -- or so she believed -- had manifested as the demon Ba'al, who now wanted the tot for his own. In the end, it was revealed Matt (Rubinstein) and his friends were actually trying to drive her mad, in a ruse to take control of all her money.

Matt and his friends suffered deadly consequences though when Liv summoned the real Ba'al and had him do her bidding. Matt's buddies were dismembered, while he was locked up for their murders.

TooFab caught up with Rubinstein after the episode aired, where he opened up about joining the "Horror Story" family, his respect for Ryan Murphy and how he could relate to his on-screen alter-ego's struggle as an aspiring actor.

Obviously, you’re no stranger to working with Ryan Murphy and he loves using his actors in different projects. Had you expressed interest at all in appearing in any of his other shows / how did this land in your lap?

It was pretty surreal, man. He literally called me one day and was very forward and was like, "Are you working this summer?" and I said, "Nope!" and he said, "Well, I got a cool part for you, are you interested?" and I said, "Yep!" and that's kinda how it happened.

Literally, a day later, I got the script and it was just a wild, wild story and exactly what you saw on screen and I was like, "Where do I sign up?" It was amazing, surreal, bizarre, so cool!

What was your initial reaction to the twist and how fun was it to tap into Matt’s bad side after playing the doting husband for half the episode?

It was crazy. The twist in the middle of the episode when we reveal that Matt is actually behind it all, I love that there was no suggestion or any hint that Matt was actually a bad guy. I think it works really well and it read very well. I never suspected it and everyone that I spoke to and the fans, nobody saw it coming, which was great.

And I think the second twist, that we have to talk about, is that she's gonna pretty much make a baby with Ba'al the demon at the end of the episode. I know that's got a lot of people talking and it was just so bizarre and I'm like, at this point, when it's American Horror Story, I'm not even surprised. So that was just so epic.

And finding that humanity in a bad person, that was my challenge with Matt. I kinda always saw him as a sociopath, because I think you kinda have to be to do this.

It's the long game, you really gotta stoop low. You gotta be a really horrible person to do this, especially to like a mother that just had a baby. It's just awful. My whole thing was, I look at Matt like two separate characters. It's almost like working on two different characters -- the first half of the episode Matt and the second half of the episode Matt. I really wanted to make sure the first half Matt was very gentle, soft spoken, super supportive and loving, so you'd never suspect he had any potential to be a horrible person. That's sort of how sociopaths act. And the second half of Matt, changing his walk a little bit, his posture, he's a bit more loose and arrogant and a little show-offy, it was a lot of fun. I enjoyed it, man!

Do you kinda wish you got a brutal death scene like some of Matt's friends?

No, actually, because I always die in my stuff! I'm really racking up a lot of epic deaths, so it was actually a relief to finally not die. But then again, I'm sure prison life for Matt is not going to be pretty fun. He might actually wish he got murdered by the demon.

Your character in this is really paying his dues as an actor, appearing as dead body after dead body on prime-time crime shows. What was the grind like for you when you first got into the business?

I didn't even have the privilege of doing any dead body roles, I just kept getting said "No" to. That was not fun. It's not fun being said "No" to and also being broke and trying to do it in New York, which is like the craziest city. I can definitely relate to that.

I really like that scene where he's like, "It's not just a corpse, I actually have lines with real actors" and I can relate to that. I remember my first time having a small but substantial role and that excitement and you feel like the work is paying off. There's a lot of stuff I can relate to with Matt.

Can you talk a little about working with Billie and working on your chemistry with her?

It was weirdly easy. First of all, when I knew she was gonna do it, it was such a relief because it's a really brutal performance. It's gonna take a lot out of whoever portrays that character and I knew she'd be able to handle it. But to be able to see it in person, on set, and especially she just had a baby and she's going through so much with her actual kid and portraying this crazy role, she's such a pro and I think she just crushed the whole episode.

It's like, whether we're working at 4 in the morning or 4pm, she just brought it every time and it was so fun to watch. I think when an actor gives you his or her all, it only makes you better. We really bounced off each other. I was really happy with our relationship on screen.

Would you be down to appear in American Horror Story or any other Ryan Murphy shows if the offer came in? 9-1-1 schedule permitting, of course.

I'm truly at a point where, if Ryan calls me with a one-line character, I will say "Yes." He's so brilliant, his projects are so brilliant and it's so much more than being a creator, it's everything he does outside of work and as a human overall. He's just a good, good, good person and obviously what he's done in the entrainment industry, he's a true trailblazer.

If he calls, I will answer. I would even do a role that doesn't have any lines. I'm down for whatever!

You're in that dead body.

"American Horror Stories" is streaming now on FX on Hulu.