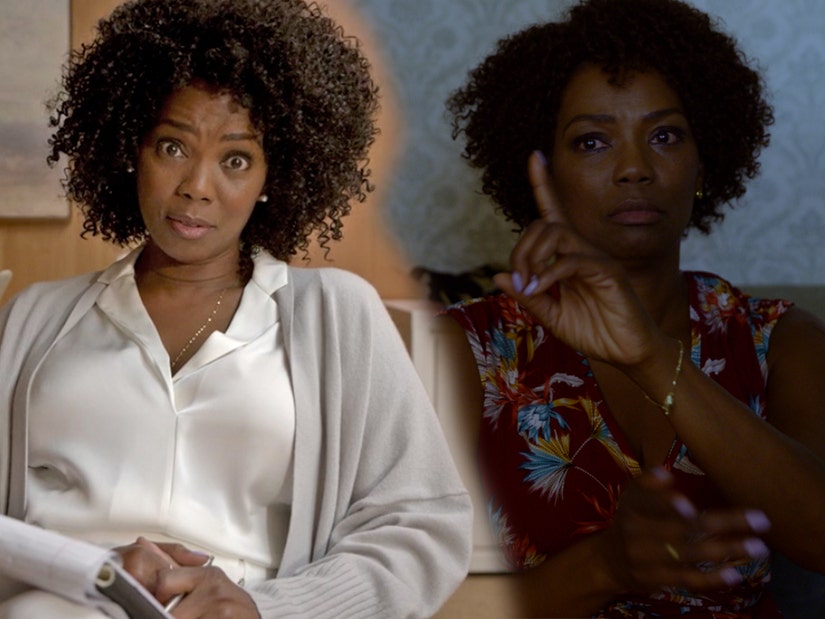 Williams opens up about her "marvelous" experience working on the anthology series, teases her "Candyman" return and reacts to all those memes from her trailer moment.

When it comes to watching horror, Vanessa Estelle Williams is a little too scared to call herself a "big fan" -- but in 2021, horror is certainly a fan of hers!

The actress and self-described "scaredy cat" was recruited to join Ryan Murphy's anthology series "American Horror Stories," appearing on the most recent episode as Dr. Berger, a postpartum specialist who does her best to help out Billie Lourd's character -- a character who fears she's summoned a demon.

But that's not the only terrifying tale she's part of this year. Later this month, she also reprises her role as Anne-Marie McCoy in the sequel to 1992's "Candyman," which is also called ... well ... "Candyman." The new movie stars Yahya Abdul-Mateen II as a full grown Anthony McCoy, Anne-Marie's son who was abducted by the titular urban legend as a baby in the original.

The two hair-raising, high-profile gigs are just the latest example of how Williams has been living out her "dreams and affirmations" in recent years -- and two projects which put modern twists on already established formulas.

TooFab spoke with Williams about getting recruited to join the "AHS" universe, returning to the world of "Candyman" and getting memed doing it ... and why she loves what horror is saying these days, even if her "scope in terms of horror is limited to what I have been blessed to be a part of."

So happy to see you back in the horror space in two different projects this year, "Horror Stories" and, of course, "Candyman." As far as "Horror Stories" goes, how did your involvement come about and had you been a fan of the parent series beforehand?

Absolutely. You couldn't be alive and not been under the mystique of the parent series, American Horror Story and those amazing performances. So when I got the call, the offer to come and play with Ryan Murphy and that whole family, I was like, "You had me at Ryan Murphy." I was actually away in New York and planning to stay there for the month and they were like, "You got this offer." Umm, I'll be right there!

It was marvelous, marvelous, marvelous. It's a thrilling series because of the depth of the creativity and going from American stories, literally American horrors that I stop when I'm watching and Google the history of this particular house or Marie Laveau or whatever the particular storyline is. It's always so fascinating to me, because this country is entrenched in so many horrific stories as part of our unknown history and it gets to be sort of exorcised out and brought to the forefront so we can deal with it and heal from it, ideally.

When Coven was on, we did a fact-checking the episodes type thing and it was wild to learn some of the horrific, real life events it was based on.

It is so fascinating. You need hundreds of series and films and documentaries to really go through the layers and layers and layers and how those things build upon everything else. And you see them play out. And what's wonderful about being an actress and an artist and a creative and a storyteller is that you really get to shape popular opinion. You really get to reshape it and that's what's so powerful about being with creatives that are so set to right those wrongs and make the story right and uncover these things that have been operating in our country and principles that have been running on automatic, just like, "This is the way it's always been."

And that plays out in "Ba'al." I feel like it's a riff on "Rosemary's Baby," but in this case the mom is not such a victim. She is initially, but then she gets her sweet revenge. She finds her power, she finds her voice and, even in the whole setup of it, she's not the housewife, she's the woman who's got the paper and he's trying to catch up -- which might be part of the problem!

He's gotta enlist all his friends. It was just so horrific when you take the turn. It's so cute to see this United Nations of friends in their initial scene, but then you see what they're really made of and how they're out for the money at the cost of this woman's sanity and life. And the poor baby, nobody's even thinking about the poor baby!

Now that you're officially part of the Ryan Murphy family, we know he likes to use people from certain projects all over the place.

Oh my goodness, from your mouth to God's ears, I pray that is the trajectory that we're on. I'm feeling so, they treated me very, very well. I felt very welcomed to be a part of it in every way.

Is there another of his shows you'd love to pop up on in the future?

I'm a Taurus, so I'm and and not or. So, all of them! I see possibilities for me in all of them. They're all different genres, I like to stretch and become whatever's necessary, so I'm open and available to all of them. Of course, "9-1-1" and "American Horror Story," it's just so marvelous. And whatever he's got next, just to be working -- I had a prayer and affirmation some years ago that I wanted to work with the best creatives and highly visible and lucrative gigs and those prayers are being answered. I'm right on mark in terms of living in my dreams and affirmations, living them out. So, I'm at his service, whatever he would like. I don't want to choose one and box myself in!

Are you a fan of the horror space in general / what types of horror have you been drawn to in the past?

I do horror as a living, but I'm not the biggest horror fan. I'm a scaredy cat! I have a stomach for it once I know, "Oh, that blood isn't real" or "Oh, I remember that [Virginia Madsen in Candyman], how those burn marks looked on her in the trailer." I get really, really frightened. I didn't watch "The Exorcist" until I was a young adult. The movie came out when I was a baby, but I couldn't watch it because I'd get terrified.

I had this serious Christian upbringing, the devil was something we definitely did not want to mess with. I didn't want to hear his voice. My scope in terms of horror is limited to what I have been blessed to be a part of.

What I do love about contemporary horror, as it's expressed in "Candyman" -- certainly this most recent incarnation even more-so, but Bernad Rose's original film as well -- is that it's about the thriller, the psychological, the fear that lives inside of us that gets projected into the world. I think that's how horror functions, right? Let me have this revenge experience and also dealing with demons and the dark side that is part of our humanity and you get to where it can go and how it can be expressed but you don't have to experience it in your real life. You get to take that ride, if you will. But, for sure, the psychological thrillers and horror of it all is the thing that's most frightening to me, gets inside your head and stays with you. Haunts you.

I love love love that you're back in the new Candyman movie. At what point did you know they wanted Anne-Marie to return and did you have any hesitations?

No hesitation at all! When I heard they were doing a sequel and that the Anthony character was going to be a part of it, I was like, "Well, certainly we have to see what happened with his mama!" I was really, really pleased to get that invitation to come back and recreate the role and see what Anne-Marie had gotten up to. It was marvelous, no hesitation at all.

When the first trailer dropped, you simply saying "Don't" in the trailer was a moment and fans were eating it up.

That shocked me, because initially they weren't going to reveal my character in any of the PR and I was like, how am I going to do press on it when they're saving it as a surprise? I was so thrilled to see it as a trailer and then the trailer went viral. I was like, "Oh, I'm a meme!" It was so funny, Twitter and Instagram, they don't play and it was joke after joke after joke. It was marvelous.

What does excite you about this new incarnation?

What I think will be really interesting and what I think excited me was that the point of view really shapes it differently and brings it to this current moment that we're in, this reckoning and deals with the whole legacy of Candyman and all of that.

And bringing it back to American Horror Stories, it's so thrilling that it's in the tradition of "The Twilight Zone" and these anthologies, I think it's a thrilling, wonderful new tradition to do these one-offs. Here's a flavor of this, here's a flavor of that and I have no idea what the next ones will be. Each of them are so standalone in their look and story, it's just marvelous to be in that tradition of storytelling and psychological horror that I grew up with and watched with one eye, with all the lights on, in the daytime!

"American Horror Stories" is streaming now on FX on Hulu, while "Candyman" is set to hit theaters August 27, 2021.