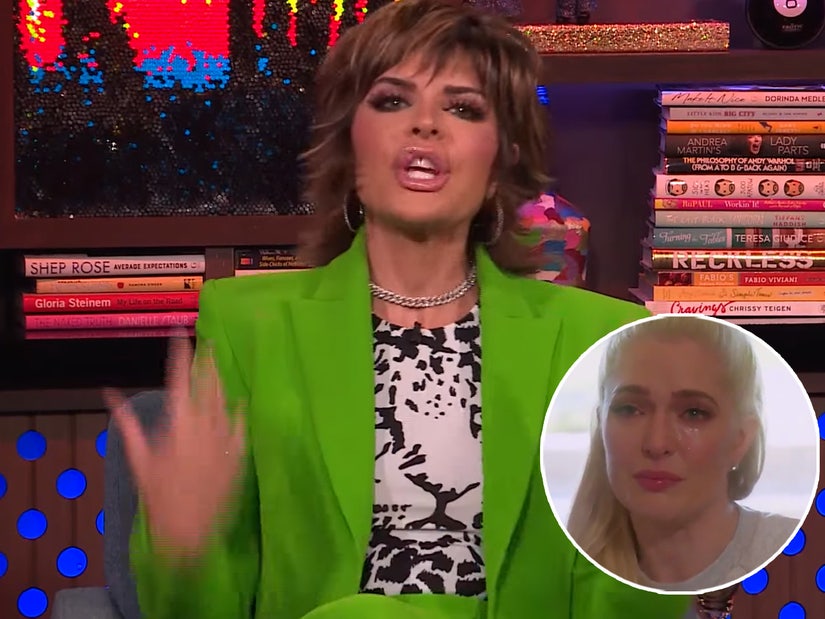 Rinna explains why she was harder on Denise, sets straight a "terrible rumor" about Erika and reveals whether she really believes her costar knew nothing about Tom's alleged actions.

Andy Cohen put Lisa Rinna in the hot seat on "Watch What Happens Live" on Wednesday night, throwing a few "shady" viewer questions her way about her behavior this season on "Real Housewives of Beverly Hills."

As more details and allegations come out about Erika Jayne's divorce and the lawsuit filed against her and her estranged husband Tom Girardi, Rinna has found herself as one of Erika's strongest supporters -- even going so far as to call out Garcelle Beauvais for asking too many questions about the drama.

This Rinna is a far cry from the Lisa viewers saw in previous seasons, one who butt heads with Denise Richards just last year over what she felt were "inconsistencies" in Denise's claims about Brandi Glanville ... and has asked others like Yolanda Hadid, Kim Richards and Lisa Vanderpump to "own it."

During her WWHL appearance, Cohen asked a viewer question wondering whether we'll see her hold Erika to the same standards she held Denise, as some of her costars begin to question how involved Jayne really was with her estranged husband's allegedly criminal behavior.

"What I will tell you, I am somebody who does take a look at my behavior and what I've done and I have grown since last year. And I'm not gonna behave the same way I did last year with Denise with Erika," she answered. "It's different, it's like apples and oranges, we're dealing with a totally different set of circumstances and what I do have to say is the audience needs to just wait and let it play out. We are just at the beginning of it."

Another fan asked what she was "smoking" when she told Garcelle and the other ladies "It's not our job to ask questions" -- considering her "entire career on Housewives" has been doing just that with former costars.

"That is true, I will own all of it," she replied. "Here's the thing. Do I have to f---ing do everything? Do I have to carry this show on my back? No. Seriously though, there are other people here. There are 8 of us, am I the only person held accountable to this? No, I'm not."

Cohen then asked Rinna whether she thinks Erika was totally in the dark when it comes to Tom's allegedly shady dealings -- including stealing money meant for cancer patient, burn victims and children orphaned from a plane crash.

"I've known Erika a long time, I don't think she knew anything," said Lisa. "You tell me how she would know, why would Tom Girardi tell Erika anything? The lawyers didn't even know. That is how I feel, I'm gonna stand by it, if I'm wrong, I'll f---ing deal with it. That's my feeling."

When asked whether she shared Sutton Stracke's concerns about being around Erika during this time, Rinna said that "what Erika does does not affect me." She added, "That's the truth of it. I have businesses, you think I would be more worried. Sutton doesn't really have a business. She has her store, but you know what I'm saying. I don't understand that, I just don't."

She added she'll have "a lot to say" about Sutton's concerns coming up later this season.

The Erika talk came up again during the After Show, which was posted to YouTube. Andy brought up "kind of a shady question" from a viewer who wondered whether Rinna wasn't pressing as hard on Erika because she invested in her makeup line -- something which has been rumbling on Twitter all season.

"She did not invest in my makeup line, let's get that really straight right now," Rinna emphatically replied. "That was a very terrible rumor. I would never borrow money from anybody. I have a partner that I'm in business with. Erika did not give me a dime and, by the way, I would never borrow money from a friend. Don't ever get into business with a friend. That is not true, not true, no."

Lastly, she was asked how often she spoke with Erika -- admitting she's much closer to Jayne than any of her costars, including former friend Denise Richards.

"I talk to Erika when Erika wants to talk. I can't really give it a timeframe," she said. "Let's put it this way: I'm closer with Erika than I've been with anybody in this circle. I'm way closer to Erika than I ever was close to Denise Richards. That's the truth, I think that needs to be said."

"I know everyone thinks Denise and I were close. We were acquaintances much like I am with Garcelle," Rinna continued. "I've known them for many years, but they're like party friends. I have become close friends with Erika over the six years. I'm much closer to her than I've been to any of those women. So that is important to know I think."