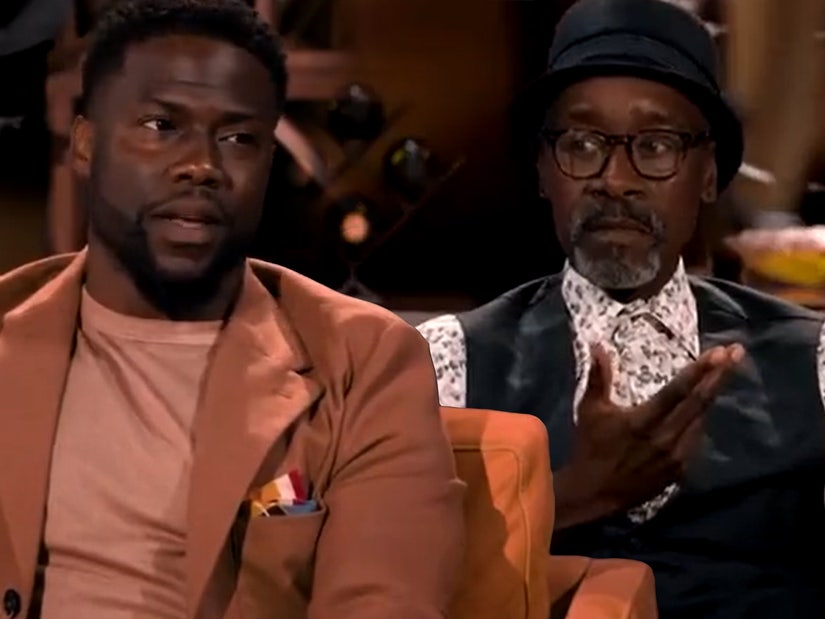 "I'm sorry. It was a thought and I blurted it out," said Kevin -- after appearing to offend his guest by saying this!

Kevin Hart's interview with Don Cheadle for his "Hart to Heart" talk show on Peacock momentarily went off the rails this week in a cringeworthy moment that's since gone viral.

The "Iron Man" star joined Hart for a 45-minute interview, but one awkward minute of the otherwise-friendly conversation has everyone talking on Friday.

During a discussion about success and being able to provide "generational wealth" for his family down the line, Cheadle said, "I'm 56 years old" -- eliciting a "Damn!" out of Hart. That was immediately met with a death stare from his guest, who quickly started to backpedal

Don, however, wasn't buying what Hart was selling. "We'll take a poll on how you meant it with people here later after the show's over," said Cheadle, while Hart continued to say the exclamation came from "a place of love."

"If we could play it back right now, these are two different damns," Don shot back. "You said the word damn, do you want me to tell you how I said it?"

As Cheadle repeated Hart's inflection, Kevin denied that's how it came out -- before softly saying, "I said, 'Dammit.'" That had Don cracking up, as he remarked, "Each time you said it, it's gotten quieter and quieter!"

Getting the interview back on track, Hart joked that maybe it only sounded quieter and quieter because, maybe, "56 is catching up!"

As a clip from the show went viral on Twitter, both Hart and Cheadle chimed in on the conversation -- making it clear there's no bad blood between them. "Y'all gotta check out this interview in full," tweeted Hart, along with some tears of joy emojis.

When one fan asked Cheadle "what went through your mind at that moment?", Don replied by saying, "that @KevinHart4Real and i need to do a movie together asap! i think this is my favorite interview ever. 'damn!'"

He also continued to troll Hart ... and some of his followers who maybe didn't see the confrontation was all in good fun ... in additional tweets.

😂😂😂 that @KevinHart4real and i need to do a movie together asap! i think this is my favorite interview ever. "damn!" 😂😂😂 https://t.co/rVtwyPnipM

@KevinHart4real couldn't "read a room" if it was made out of small words ... https://t.co/IVCRDPg5pD

See how some of the viewers reacted to the moment on social media:

Why it look like Don Cheadle was about to slap the shit off Kevin Hart 🤣 https://t.co/sYwqtDx4Fx

Just saw that Don Cheadle and Kevin Hart clip. Don had no mercy, and I felt the second hand embarrassment through the screen. pic.twitter.com/yeHpCtDmCB

The following is a reenactment of the Kevin Hart/Don Cheadle interview. pic.twitter.com/YTTtaQbHaY