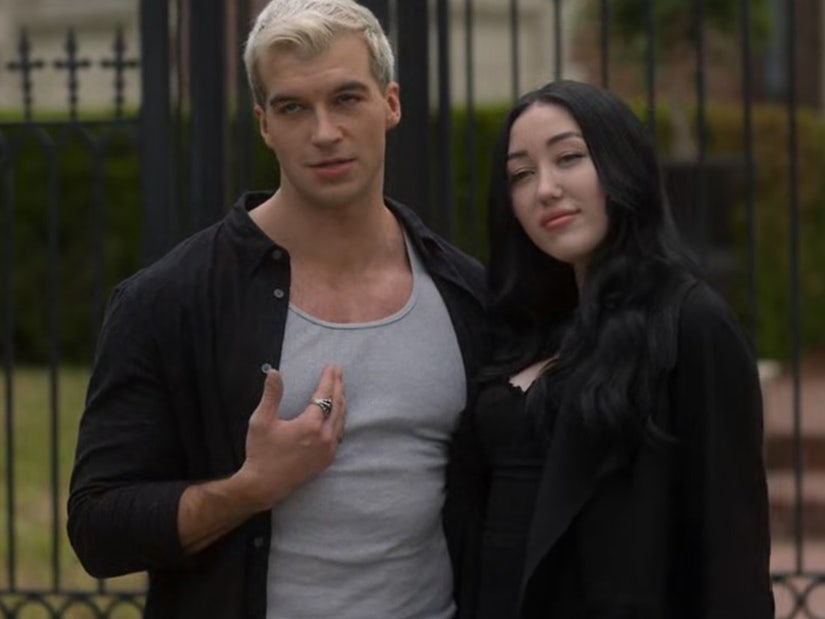 Serving as a sequel to the "Stories" series premiere as well as the first season of "AHS," newcomer Noah Cyrus is joined by Dylan McDermott, Jamie Brewer, Paris Jackson, Kaia Gerber and Sierra McCormick as their "Murder House" characters.

Once again, "American Horror Stories" returned to where it all started for the entire franchise with a new chapter in the ongoing saga of the Los Angeles "Murder House" -- could it be the last chapter?

Picking up story threads from the very first season of Ryan Murphy and Brad Falchuk's "American Horror Story," as well as the two-part premiere of the "Stories" spin-off, "Game Over" is filled with familiar faces in familiar roles, as well as a few surprise twists along the way. 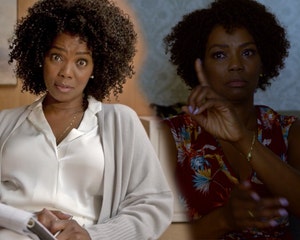 New to the franchise is Noah Cyrus, who joins Adam Hagenbuch as the latest eager couple ready to explore the infamous house. But in a very meta sense, they are doing it as super-fans of "American Horror Story" itself, dropping references to the various characters and seasons of the show, and even the actors.

We couldn't help but giggle when they lamented that Sarah Paulson actually dogged the "Roanoke" season -- she totally did -- when they thought it was pretty great. Is that Ryan Murphy responding to Paulson's criticism within his own "AHS" universe.

We loved the meta approach as it suggests that the "AHS" shared universe is actually more real than we might realize -- at least for a few moments. We told you there were twists and layers and Noah and Adam were just the first.

As they made their way through the house, they ran into familiar faces like Dr. Ben Harmon (Dylan McDermott) from Season 1, but they also ran into Adelaid Langdon (Jamie Brewer), who notably did not die in the house ... as the characters pointed out.

There was Rubberman, but also Twisty the Clown and The Infantata and Piggy Man and it was starting to look like an All-Star reunion of the whole cast. This wasn't right, right? Well, turns out it wasn't as none of what just happened was real. Instead, it was an earl prototype version of an "Escape from Murder House" video game, based on the show.

Outside the Video Game

Turns out Connie and Dylan were just video game characters -- glad we got the "two pump" detail about their sexual encounter in the house for a video game -- developed by Michelle (Mercedes Mason) as an attempt to connect with her son, "AHS" super-fan Rory (Nicolas Bechtel).

So the meta conceit continues, but with another layer on top of it. Now, we've got a more typical "Murder House" story, about a dysfunctional family struggling to connect who find themselves embroiled in the chaos of the "Murder House."

We also got commentary on what the house is really all about, and why so many people get trapped there. The trick to escaping the house, according to Rory's theory, is that you have to deal with your shit. Those who don't are forced to stay and repeat forever.

As he rejected his mother's mash-up/all-star take on "AHS" for the first version, he rejected her outright and headed off to spend some time with his dad. It turns out this is just her latest obsessive-compulsive drive. This is the character flaw that ended her marriage and now it's driving her son away.

Remember what Rory said about what people have to do to escape Murder House? Well, in an attempt to "get the vibe" of the house and the show, Michelle pretended to be interested in buying it. She bought herself just enough time to spend some time with the house -- inadvertently choosing Halloween to do it.

You know, the one night when the ghosts of the house can roam free. 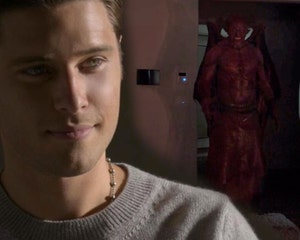 Here's where we got our more direct sequel to the "Rubber(wo)Man" two-part series opener, as Michelle's return to the house clearly followed the twisted saga of Scarlett's story. Right away, we saw the return of Paris Jackson and her mean girl friends, not to mention Scarlett's ghostly lover, Ruby.

Scarlett herself even returned, as was set up in that premiere, for her annual reunion with her lover. And while all this was going on around her, with the house strangely quiet, Michelle ran into Dr. Ben Harmon.

Fresh from her video game, here he was in the flesh, so to speak, and they even began in impromptu therapy session. She suggested Rory's theory to him that he needed to stop blaming the women in his life for his bad behavior and own his shit. But he's been here a long time now, and not every ghost in the house knows how to do that, or even wants to.

Ruby, in particular, doesn't want things to change. And her girlfriend Scarlett is a sociopath, one of the few non-dead regulars in the House, which meant Michelle was in real trouble when they stopped by to visit.

Well, this is Murder House, so what did we expect to happen? Cut to a year later, and it's Halloween again. Michelle finds Rory outside and he's furious with her for allowing herself to get killed, proving he was right. She didn't deal with her own obsessive b.s. and she died for it ... in the house ... like all the other ghosts.

But Rory has an idea, a way to maybe end all the suffering of the house and it sets up a pretty exciting closing chapter. As Halloween night ends, the ghosts all return to the house and then Rory shows up with a wagon full of gasoline and a book of matches.

Fire cleanses and purifies so if he burns Murder House to the ground, maybe he can save all the souls inside, even if it means saying goodbye to his mother, too.

There was a great sequence of events and building tension as Ruby tried desperately to stop him, only to have Paris' Maya and her friends join Ben in doing everything they can to stop her ... but not before she gets a call out to Scarlett for help.

Rory doesn't even realize the danger he's in as Scarlett isn't dead. With Ruby fighting ghosts in the house and Scarlett on her way from the outside, the tension is reminiscent of the final moments of an epic video game where everything has to go just right and in this case, it does.

The match finally lights, just as Scarlett grabs Rory's wrist and Ruby screams ... but the match is lit, so it drops and the house goes up in flames. Ruby begs Scarlett to join her, but Scarlett instead walks away. Remarkably, she doesn't kill Rory.

Instead, we cut to three years later, and the same real estate agent who showed Murder House to Michelle is now showing Scarlett a sparkling new condominium project that just so happened to be built on the same site where Murder House burned to the ground. So Scarlett snatches up the last unit in a desperate attempt to reconnect with Ruby -- hoping that maybe she's still around.

Finally, in the closing moments, Ruby shows up in her bed and tells her she's the only spirit who stayed, doing so because she knew Scarlett would come back. A happy ending? What's this?

Immediately we pan out to Rory playing the latest version of his mother's video game, and Michelle is there, too. So clearly she didn't die in the house. So what did happen? Did she ever even pretend to buy the house or spend time there, or did she just binge-watch the show again and call it a day.

It would be easy to think that it was all just a made-up video game, but then Rory and she talked about the house and the ghosts who lived there as if it really had burned down. If Michelle wasn't in it, Rory wouldn't have burned it down, so then what really happened to it?

They wondered if the ghosts had truly moved on, or if the loss of the house might mean that some of them escaped out into the world. With that, we got a closing shot of the iconic Murder House red ball rolling across their floor after they closed the door.

So-- is the Murder House really gone? If so, what happened to it? If it burned down, who burned it down and why? What would draw the red ball to their house? If all of this is in continuity, does this mean that the ghosts of Murder House are now free to wreak havoc anywhere and everywhere within the "AHS" universe?

Twitter was left pondering reality as well after all these twists and turns left too many things uncertain, with some expressing a combination of confusion and disappointment -- perhaps over their confusion. Is anything real? Did this spin-off show even happen?

Me trying to figure out what’s real, what’s in the show, and what’s in the video game after the latest episode of #AHStories pic.twitter.com/wipSFsTM0u

this finale episode of #AHStories WHAT'S GOING ON

So, here’s what I said out loud on #ahsstories season finale & I’ll try to be as vague as possible:

1: What the Hell?
2: Oh, cool references!
3: That doesn’t even make sense!
4: I want an AHS video game or a map or something on Dead by Daylight; I would play it.

wait does this mean that all the episodes with murder house in american horror stories was part of the game? i’m confused

American Horror Stories finale made zero sense. It was all a video game but they are talking like the house really burned down in the end? The entire episode was confusing. I don’t even know what to say lmao. Why can’t we have a Coven spinoff instead of this? @hulu #AHStories

"American Horror Stories" was picked up for a second season -- can Ryan Murphy and company resist returning to Murder House yet again? In the meantime, "American Horror Story: Double Feature" kicks off with a two-hour premiere next Wednesday at 10 p.m. ET on FX. 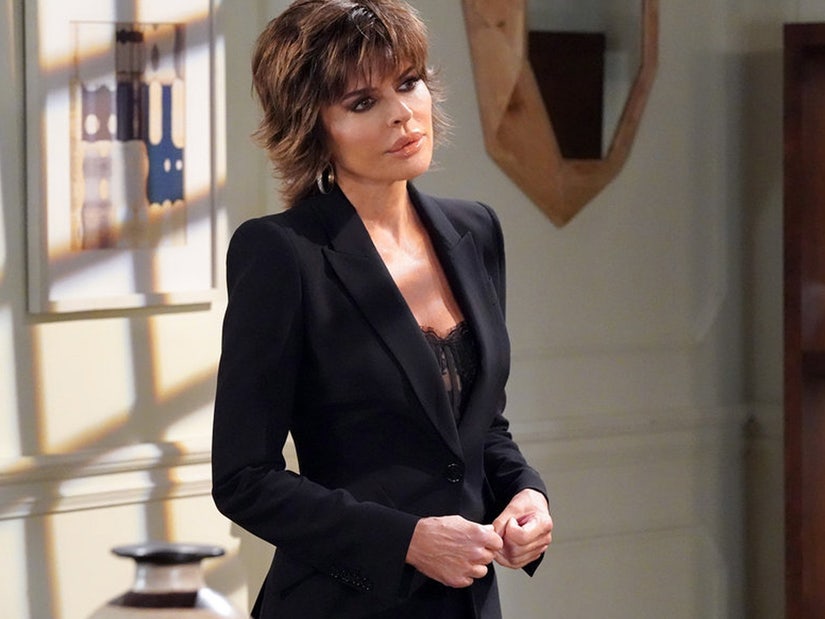