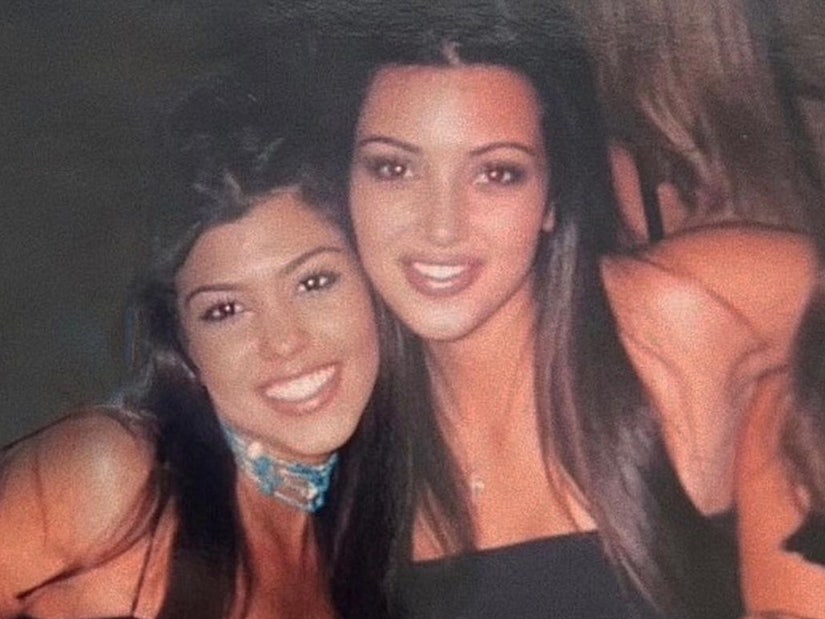 "We can't get into too many details because I don't need any more legal problems," Khloe chimed in.

Kim Kardashian's story about the weekend she visited Kourtney in college has some holes in it, according to both Kourtney herself and Khloe Kardashian.

Kim had posted a throwback photo of herself and Kourtney at a college from when her older sister was a student at the University of Arizona, saying that visiting Kourt on campus "stopped [her] from turning into a wild party girl." The SKIMS founder also said she disliked the college parties "so much" that she would choose to stay home.

While Kim claimed that she "hated all of the wild parties" and that she recalled being Kourt's "designated driver," Kourtney said that wasn't the case and called out Kim on social media. 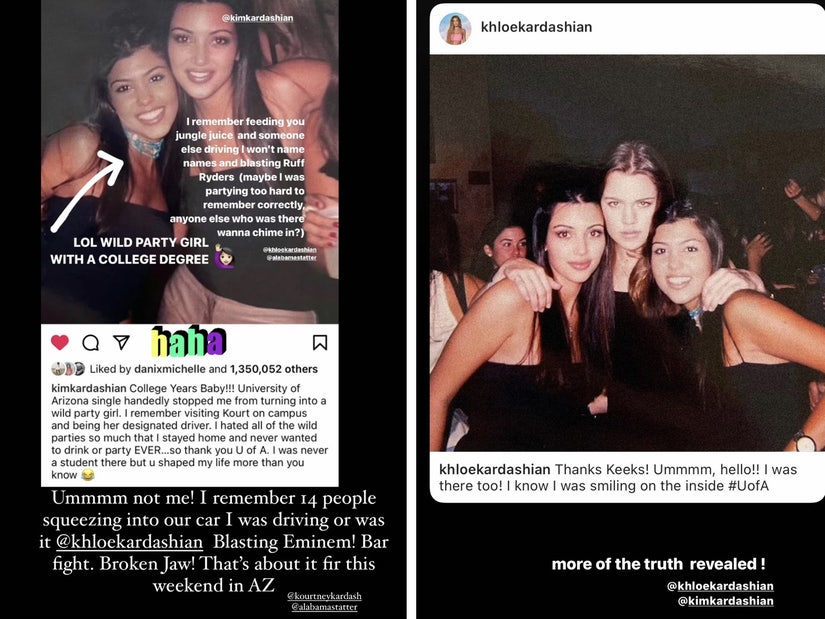 "I remember feeding you jungle juice and someone else driving I won't name names and blasting Ruff Ryders," Kourtney said. "(maybe I was partying too hard to remember correctly, anyone else who was there wanna chime in?)."

The POOSH founder also seemed to flaunt her college degree in the post. Alongside an arrow pointing at herself in the pic, Kourtney wrote, "LOL wild party girl with a college degree."

"Ummmm not me!" Kim said. "I remember 14 people squeezing into our car I was driving or was it @KhloeKardashian Blasting Eminem! Bar fight. Broken Jaw! That's about it fir [sic] this weekend in AZ."

Meanwhile, Khloe also chimed in, calling out Kim for leaving her out of the story. "I was there that night too bitch," she commented on Kim's post.

The "Revenge Body" founder went on to share a photo showing that she and her sisters were all together that night.

"Thanks Keeks! Ummmm, hello!! I was there too! I know I was smiling on the inside #UofA," she captioned the pic, above.

Kourtney commented on Khloe's post, sharing a detail she remembered from the night the photo was taken. "The night of the Khlo-motion party where we put Jungle Juice in the water cooler!" she wrote.

The Good American founder replied to her sister, saying that she's "the reason why you guys got all home safe."

"Thank God I have you! Kimberly totally tried to box me out of that whole adventure," Khloe commented. "I literally am the reason why you guys got all home safe LOL we can't get into too many details because I don't need any more legal problems."

Kourt also shared Khloe's post on her Instagram Story, noting that "more of the truth [was] revealed."

It's unclear if the sisters got their story straight -- and if we'll ever know what really happened that weekend.

While students enroll in higher education to receive degrees within their chosen fields, college also comes with certain expectations of frat parties, sneaking alcohol into dorms and going wild with friends --- but not for Kim Kardashian.

When Kim posted a throwback picture with Kourtney to Instagram on Wednesday, she revealed that all of the times she visited her older sister on campus made her swear off drinking and partying.

The SKIMS mogul captioned the post, "College Years Baby!!! University of Arizona single handedly stopped me from turning into a wild party girl."

"I remember visiting Kourt on campus and being her designated driver," she wrote, "I hated all of the wild parties so much that I stayed home and never wanted to drink or party EVER…so thank you U of A."

Kourtney Kardashian is a 2002 University of Arizona alumni with a degree in theatre and a minor in Spanish. The poosh founder had transferred from Southern Methodist University after two years to finish her degree at the U of A. Five years later, she had started filming "Keeping Up with the Kardashians" and became a household name. 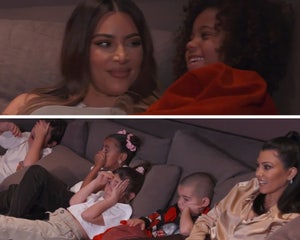 On the other hand, Kim Kardashian briefly attended Pierce College but never graduated. However at 40, Kim has recommitted herself to higher education and is studying to take the bar exam in 2022. Kardashian hopes to become a lawyer after being heavily involved in prison reform.

While Kim may not be much of a drinker or partier now, but she has had her share of wild party days: 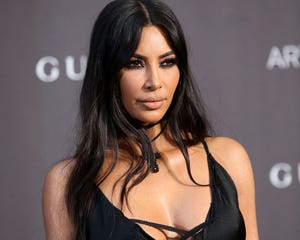