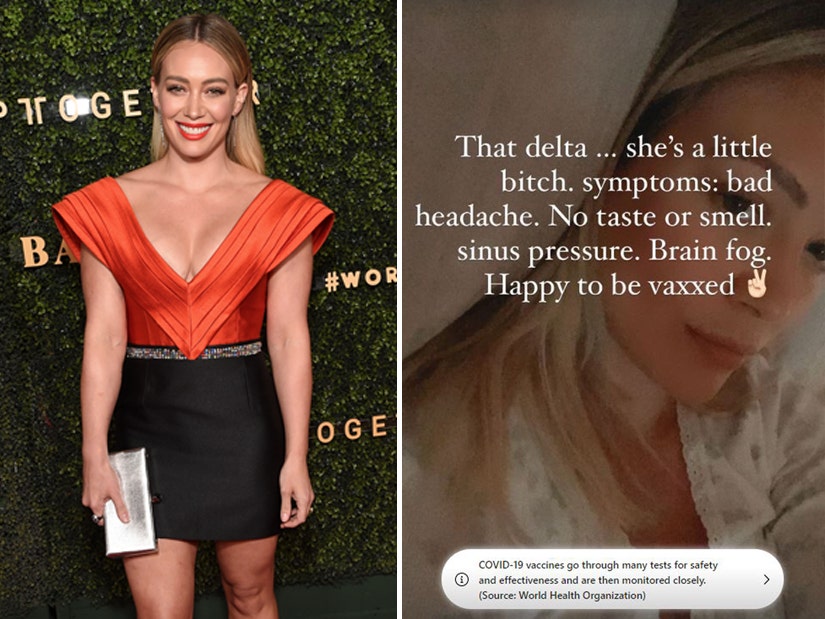 She'd just started filming the "How I Met Your Mother" sequel.

Hilary Duff has revealed she has tested positive for Delta-variant Covid-19 — despite being fully vaxxed.

The 33-year-old actress told her 18million followers the scary news via Instagram story on Friday.

"That Delta... she's a little bitch," she wrote, in a selfie posted from her bed.

She described her symptoms as "bad headache. No taste or smell. Sinus pressure. Brain fog," before adding: "Happy to be vaxxed."

The post comes just two days after she shared the first picture from the set of sequel series "How I Met Your Father."

"Who's ready for us???" the star wrote, nestled between co-stars Chris Lowell, Tomas Ainsley, Suraj Sharma, Tien Tran, Francia Raisa and Brandon Micheal Hall — all maskless as they prepared to shoot.

TooFab has reached out to Hulu for comment regarding the status of filming.

Duff isn't the first vaccinated celeb to have suffered a breakthrough case of Covid either: on Wednesday, Melissa Joan Hart revealed she too had contracted the virus.

"I am vaccinated and I got Covid and it's bad," she told fans in an Instagram video, reporting it felt like she had a weight in her chest and she was finding it hard to breathe.

"I'm mad, really mad, because we tried and we took precautions and we cut our exposure by a lot but we got a little lazy and I think as a country we got lazy," she said. "I'm really mad that my kids didn't have to wear masks at school and I'm pretty sure that's where this came from."

Expressing her fear her family members could now catch it, she begged others not to get blasé about the virus.

"If someone has to be taken to the hospital, I can't go with them and I'm just scared and sad and disappointed in myself, some of our leaders and a lot of people, including myself," she said. "I just wish I'd done better, so I'm asking you guys to do better."

"Protect your families, protect your kids, it's not over yet. I hoped it was, but it's not. So stay vigilant and stay safe."

Breakthrough cases — which are infections among the vaccinated — are rare, but possible; none of the shots are 100% effective. However those fully vaccinated are far less likely to suffer severe symptoms, while almost 99 percent of Covid deaths are now among unvaccinated people.