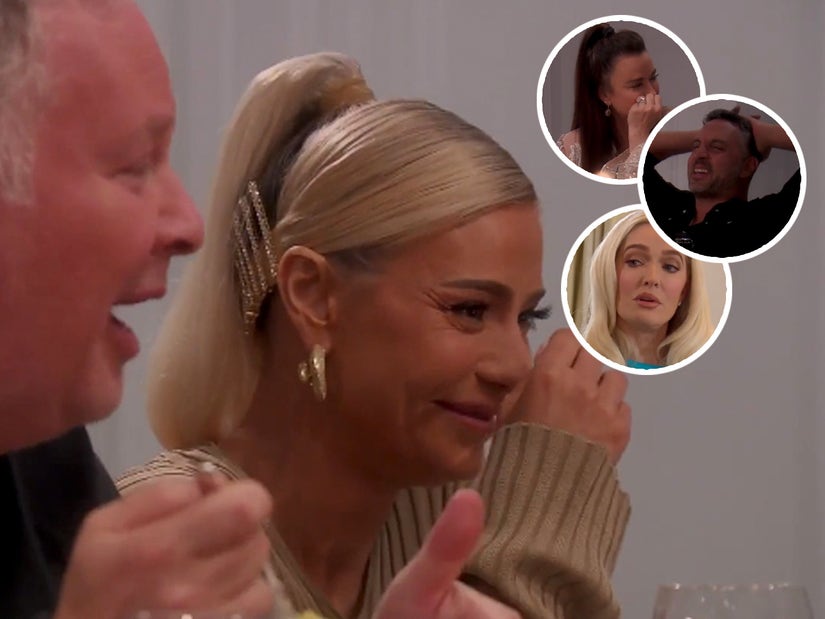 This week on "Real Housewives of Beverly Hills," stars Kyle Richards, Dorit Kemsley and their husbands all got a laugh out of Erika Jayne's wild stories about Tom Girardi -- but Erika clearly didn't find the situation all that funny.

On Thursday's episode, Kyle and Dorit filled in their husbands, Mauricio Umansky and PK, on some of Erika's claims about Tom. Earlier this season, Erika has claimed Tom sustained head and ankle injuries after he "drove off a cliff" behind their home. Tonight, she also said that when that accident happened, she didn't want doctors to operate on his brain due to "concern" over him being unconscious beforehand and his age.

She was also seen telling Kyle about another more recent, post-split incident where Tom allegedly confronted a robber in his Pasadena home and had to be hospitalized yet again. After her son Tommy checked on him, he then flipped his own car over, but was otherwise okay.

After hearing both stories, PK thought it was suspicious that both Tom and his stepson flipped their cars in such a short period. "I'm suggesting she's been in a controlling marriage for 20 years and she's still being controlled. I think Tom lied to Erika and Erika went along with it," he then said. "There's no car rolling, there's no 12 hours unconscious."

"There's lies all over the place," said Mauricio. "If a doctor comes to you and says, 'Your husband's been hurt, he's rolled over, he's been unconscious, we need to operate ... who says no!"

Dorit acknowledged that the stories were "bonkers" and said she believed details were being left out, but at the end of the day, didn't think Erika is lying. As Dorit tried to make sense of the situation out loud, she added: "Here's another scenario, they get to the ER and the doctor says listen, there may have been brain trauma or there was some head trauma, we want to operate on his ankle or we wanna operate ..."

As Kyle said none of them knew what really happened, PK couldn't take anymore. "I cannot engage in this conversation," he said, before mocking the version of events they heard. "'Let's not do the brain, let's focus on the ankle!' He's not a f---ing soccer player, he's a lawyer! He's a 79-year-old lawyer!"

"And the wife goes, 'Not the brain, do the f---ing ankle!'" he exclaimed, as Dorit, Mauricio and Kyle all started cracking up -- with Richards eventually shielding her face from the camera to possibly hide her reaction.

On Twitter as the episode aired, one fan tweeted out a collection of screen grabs showing the foursome cracking up over Erika and Tom's alleged situation. The post read: "Team Erika, but only to her face! #RHOBH"

It's clear Erika was watching too, as she retweeted the post and reacted to the scene at hand. "Felt great watching this," she wrote, along with a defeated-looking emoji.

It should be interesting to see this year's reunion, where Erika's costars will all likely be held to the fire for what they've said about her in confessionals or behind her back. Some have expressed doubt over Erika's version of events, while supporting her in-person.