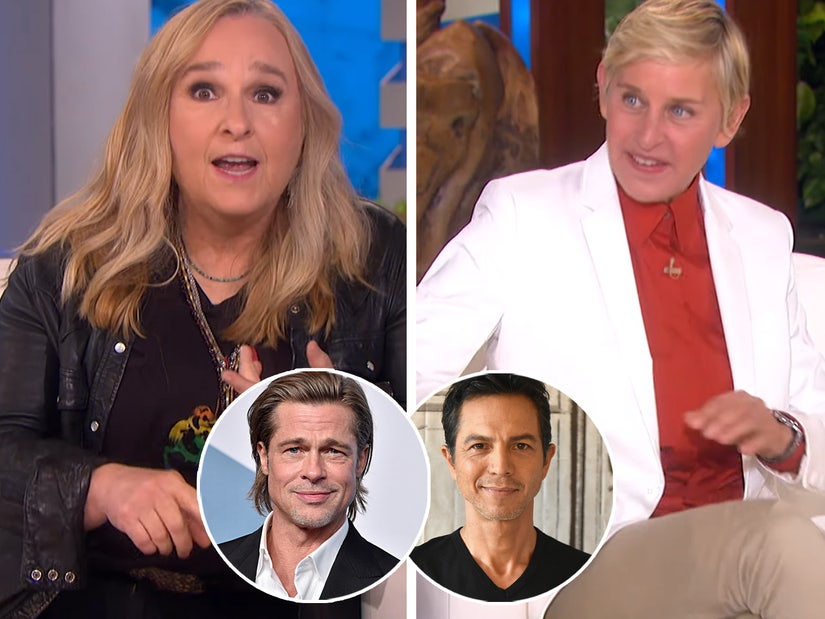 The pair reminisce about hanging out with stars like Brad Pitt and Benjamin Bratt back in the day.

Melissa Etheridge and Ellen DeGeneres had fun reminiscing about the good ole days when they actually had free time to hang out with their celebrity BFFs.

During Melissa's appearance on Tuesday’s episode of "The Ellen DeGeneres Show," the pair recalled how Ellen would talk about her dreams of hosting a TV show when they were palling around after Melissa's concerts.

"We used to hang out all the time," Ellen claimed, as a throwback snap of the pair with Rosie O'Donnell was projected in the background.

Melissa agreed, adding, "That was back when we had time. Remember? Now we just don't have time anymore."

Ellen went on to say they had a "whole big group" of friends, as Melissa called it "crazy" and rattled off the names of their entourage including Brad Pitt, Benjamin Bratt and Megan Mullally.

"And then you were the brave one to come out first," Ellen added.

Melissa chimed in, "Us rock stars can get away with a lot. And then every time we'd meet up after I came out, you'd say, 'Yeah, I'm going to do that one of these days. I'm working on it. I'm working on it.' And boy did you come out."

And with that, the conversation turned to the upcoming 25th anniversary of Ellen's coming out episode on her sitcom "Ellen," which Melissa had a part in, alongside Laura Dern.

A clip of the episode was then shown where Melissa stamps approval on the documents Ellen had to sign as an official member of the gay community. The musician then hands Laura Dern's character her complimentary toaster oven.

"You have no idea, 25 years later I still have people going, 'Where's my toaster?' Like I'm supposed to give out toasters because they're gay," Melissa joked to the audience.

"I just remember it was all hush-hush," she recalled of the episode. "Everyone was there. Oprah [Winfrey], Demi [Moore]. Everybody was involved in this because it was a big cultural experience. This had never happened on television. It was just really cool to be a part of it."

The episode -- titled "The Puppy Episode" -- would draw and audience of about 42 million people and go on to win two Emmy awards and a Peabody.