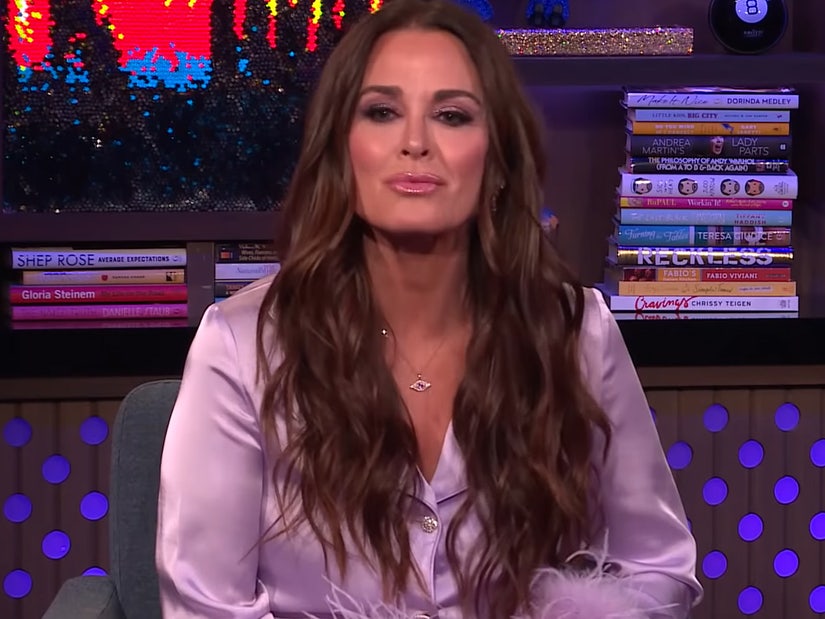 "Maybe her memory is fading along with her relevance," said Kyle, doing her best LVP impression.

Kyle Richards appeared on "Watch What Happens Live" on Wednesday night and, according to host Andy Cohen, viewers really wanted to know her reaction to one thing.

Cohen noted the number one question for his quest was her reaction to Lisa Vanderpump's claims Kyle was the one Camille Grammer was referring to when she claimed "one of the housewives mentioned" Erika Jayne and Tom Girardi's legal issues at Andy's 2019 baby shower.

And Richards was ready to respond.

"First of all, everyone who knows her texted me and said what a joke, including people involved in this," Kyle began. "But I'm going to respond to that in a classic LVP manner."

"Andy, I would never say something like this ever," she said, putting on a British accent to do her finest Vanderpump impression. "But one could argue perhaps maybe her memory is fading along with her relevance because she wasn't even at the baby shower. But I would never say something like that. You could think about that though, I'm just saying."

Richards then exclaimed, "She wasn't there!"

Of course, LVP never said she was. Speaking with the Daily Mail, she said Camille told her that's who she was alluding to on Twitter. "It didn't surprise me when Camille told me that it was Kyle that had told her the gossip about her supposed friend Erika Jayne," Lisa told the publication. "That's how Kyle works."

While LVP hasn't reacted to Kyle's comments directly, she did retweet one viewer's post about Richards' WWHL appearance. "Doesn't the saying go that people who are good liars use jokes to deflect?" the viewer wrote. "Good job Kyle we believe you did start the rumors just like the @TheRealCamilleG said. It's Kyle's MO. Best part is Erika already knows it's true."

Cohen had more Erika questions for Kyle, who has been supportive to Jayne to her face on the show, while also questioning some of her unbelievable stories in confessionals.

Of the burglary tale, Kyle said, "It sounded crazy, but I've never known Erika to be a liar. It sounded crazy, but our lives are crazy." As for why she believes Erika is now saying "allegedly" when referring to other stories about Tom's situation, Richards said she thinks her costar "was advised legally" to say it.

While viewers have speculated Erika made a conscious decision to wear non-waterproof mascara while filming a scene where she broke down crying, for dramatic effect, Richards said the thought never crossed her mind.

"Here's the thing, her eyes are always watering/tearing because she has an eye issue," said Kyle. "I've seen it happen before, so I didn't think about it."

She added that she thought Tom "seemed normal" when they all went to their home for an astrology party last season, but she has since spoken with a friend whose mother has dementia who felt there was "something in his eyes that seemed a little vacant like my mom."

As for Erika's apology to Sutton Stracke on last night's episode, she added that she thought it was "really nice" at the time ... "but then it all went down hill again after, so it was not really a real situation."

Kyle and her sister Kathy Hilton were also asked a series of "spooky" (and shady) questions by Cohen during their appearance.

When asked to reveal the "scariest" text she's ever received from another Housewives star, Kyle was quick to call out Brandi Glanville, claiming Brandi called her a "See You Next Tuesday" in a text she meant to send to someone else. "It was not supposed to be for me," Richards said in a laugh.

Richards also revealed she be "frightened" to go on another vacation with Ramona Singer after filming "The Real Housewives Ultimate Girls Trip" with her.

Kathy, meanwhile, opened up about filming her first Housewives reunion.

"I wasn't frightened. It was very interesting and it was wild. It was wild," she said, before Andy asked her about bringing her own receipts to the taping. "Everybody thought I didn't show up to Garcelle's party and I was told not to because I had not been feeling well and I am not an impolite person and I adore her and I have manners!"