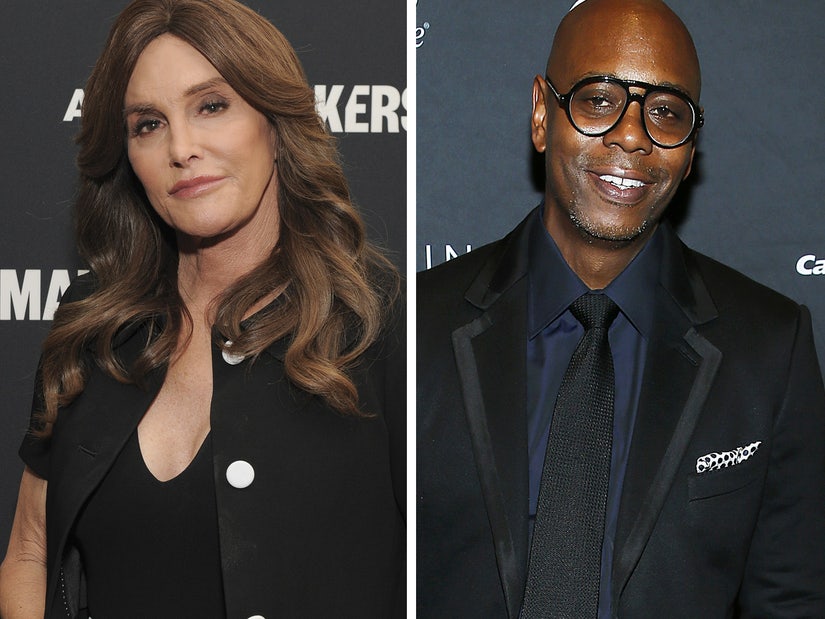 Caitlyn Jenner is coming to the defense of Dave Chappelle, who recently came under fire after he made jokes about the transgender community in his Netflix comedy special, "The Closer."

On Wednesday, the reality star -- who is transgender -- took to Twitter to comment on the controversy surrounding the comedian. Jenner, 72, showed her support for Chappelle, 48, blaming the backlash on "woke cancel culture."

"Dave Chappelle is 100% right," she tweeted. "This isn't about the LGBTQ movement. It's about woke cancel culture run amok, trying to silence free speech."

She added, "We must never yield or bow to those who wish to stop us from speaking our minds.

In her tweet, the former California gubernatorial candidate posted a clip from Chappelle's stand-up comedy show appearance from over the weekend, in which he opened up about the controversy over his special, saying the uproar has "nothing to do with" the LGBTQ community, but rather is coming from "corporate interests." He also denied that he refused an invite to talk to trans staffers at Netflix and said he would be open to do so, however, he noted that he has "some conditions."

We must never yield or bow to those who wish to stop us from speaking our minds. pic.twitter.com/Nklalj6h5Y

"It's been said in the press that I was invited to speak to transgender employees at Netflix and I refused. That is not true," Chapelle said to the audience, as shown in the clip. "If they had invited me I would have accepted it. Although I am confused about what we are speaking about. I said what I said and, boy, I heard what you said. My god, how could I not? You said you want a safe working environment at Netflix. Well, it seems like I'm the only one that can't go to the office anymore."

Chappelle then called out the media for making it seem like it's him against the LGBTQ community. "That is not what it is," he said. "Do not blame the LBGTQ [sic] community for any of this s---. This has nothing to do with them."

He continued, "It's about corporate interests and what I can say and what I cannot say. For the record, and I need you to know this, everyone I know from that community has been loving and supporting, so I don't know what all this nonsense is about."

Chappelle later went on to relay a message to the transgender community. "I am more than willing to give you an audience. But you will not summon me. I am not bending to anybody's demands," he said, before listing his "conditions," including that they must have watched his special "from beginning to end" and he gets to choose the time and place of the meeting.

Chappelle concluded the show by asking the audience: "Am I canceled, or not?" to which the crowd roared "No" in response.

In "The Closer," Chappelle made controversial comments about the trans community, including saying he's on "team TERF," the acronym for "trans-exclusionary radical feminist."

Following its release, there has been a public outcry, notably among transgender viewers, including trans Netflix staffers. Last week, many trans Netflix employees staged a walkout in protest of Chappelle's special and the streamer's co-CEO Ted Sarandos, who has continued to defend Chappelle and the Netflix special.

According to Variety, Sarandos sent two memos to Netflix staff earlier this month, with the first being sent to top leadership and the second being sent to all staff. In the second email, Sarandos said the stand-up special would not be removed from the platform because it "doesn't directly translate to real-world harm."

Per TMZ, he later apologized for how his words in the leaked emails were interpreted, admitting he "screwed up." However, Sarandos held his stance about the special not causing real-world harm or containing hate speech. He also said the special won't be removed from the platform.