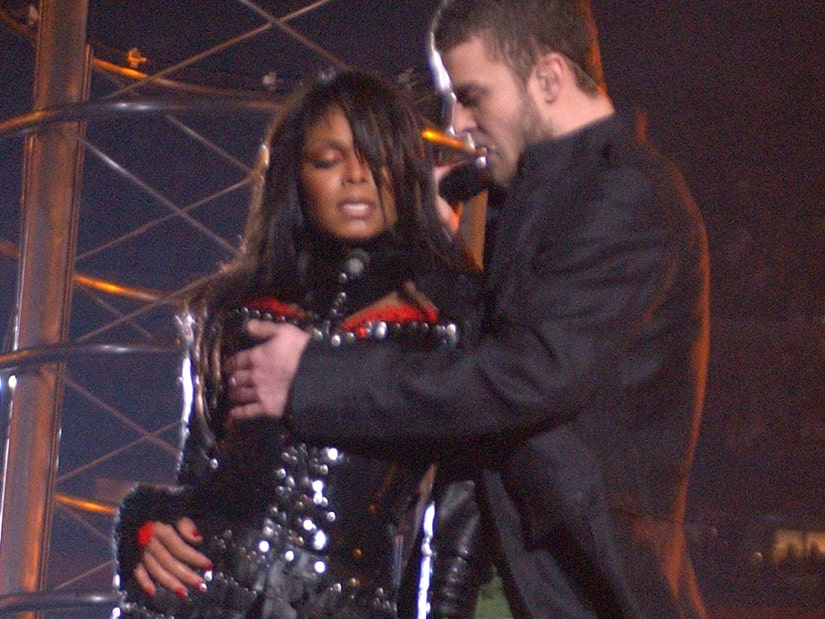 "I felt betrayed," said one MTV exec, as insider accounts revealed what went down leading up to and after that infamous Super Bowl moment.

After blowing up Britney Spears' conservatorship in the New York Times Presents documentary "Framing Britney Spears," the publication set its sights on another female pop star unfairly maligned by the public: Janet Jackson.

"Malfunction: The Dressing Down of Janet Jackson" began by documenting the pop icon's meteoric rise to fame, as she broke free from her famous family to become one of the biggest superstars of all time. Her rise coincided with the MTV generation and, when CBS and Viacom merged in 2001, she was selected to headline ViacomCBS' second Super Bowl -- following the success of its Aerosmith and NSYNC's halftime show featuring Mary J. Blige, Nelly and Britney.

One of the voices viewers heard a lot from was Jim Steeg, the former director of NFL Special Events, who said Janet was the least of their concerns the year she performed -- as her halftime show would also feature performances from Diddy, Nelly and Kid Rock.

Steeg claimed Justin Timberlake was added to the roster to help "temper the tone" of the show and make it more "family friendly." 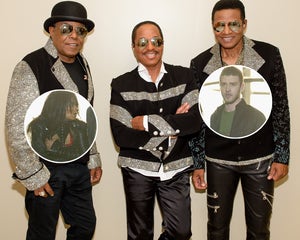 According to halftime show director Beth McCarthy-Miller, they did a full dress rehearsal a few times the Thursday before the big game. Steeg said there were a lot of notes after rehearsals, as he wrote up a 2-page memo with what needed to be changed -- including lyrics for Diddy and Nelly, as well as concerns over Kid Rock choosing to wear the American flag during his portion of the show.

Per former Senior VP of MTV Salli Frattini, they had very little rehearsal time with Justin, especially -- with Miller explaining that, initially, Janet was supposed to wear a tear-away skirt Justin would pull off her when he sang the "Rock Your Body" lyrics, "I'm gonna have you naked by the end of this song." Jackson would have had a full jumpsuit on underneath, but the powers that be decided it just "didn't work" and the NFL and CBS agreed to pull it from the routine. "She was agreeable to it," Frattini said of Janet's reaction to the note.

Frattini then went over all the wardrobe looks with someone from standards and practices and they left believing they "had delivered the messages clear" about what was expected day of show. However, it was alleged Janet's stylist Wayne Scot Lukas went rogue after the wardrobe approvals, spending money on new fabric and the starburst nipple shield. "We had no knowledge at all of what might have been happening with Janet and her team," said Frattini.

The day of the big game, Timberlake landed in Houston, Texas shortly before half time, with a police escort bringing him to the stadium. Frattini claimed "there was a request for him to speak with Janet, her stylist" in her dressing room. "We as the producers didn't, we weren't in the room, nobody was in the room," she said, saying there "was a small conversation that lasted minutes" before Justin came out and they went to stage.

"And then of course, we come to the close and it's the final few seconds of the song and that's just when everything went wrong," recalled Frattini. "The song ended, we went wide, the pyro hit and we start applauding, 'Oh my gosh, we did it!' And then the phone rings. And I'm thinking I'm answering that phone because I'm gonna get, 'That was amazing and congratulations.'"

Instead, Steeg told her what everyone else had just seen. 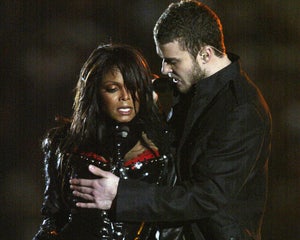 Director McCarthy-Miller immediately called her stage manager to ask what was going on down on the field. "She said, 'I don't know, but I had a blanket for Janet to wrap her in. I put the blanket on her and she was crying,'" she claimed.

Frattini then rewound the footage and realized what they had all missed the first time around: a half-second of Jackson's breast had been exposed at the end of the song. "We all stood there in shock. Of course one of the first things we tried to do was talk to Janet. Janet fled. We couldn't get her on the phone, we couldn't get the manager on the phone," she then claimed.

As Justin spoke with reporters backstage as if nothing had happened, Jackson was nowhere to be found. Frattini said they then pulled Timberlake aside and asked him what went down. "That was never meant to happen. I was told you guys knew,'" she claimed he said to them.

"We didn't. He was very apologetic. He manned up. I was a wreck personally, I was in tears, people were crying, it was really upsetting. I felt betrayed," she added. "My instincts told me that there was a private conversation between wardrobe stylists and artists where someone thought this would be a good idea and it backfired."

In the days that followed, Timberlake was the first to issue a statement, bringing "wardrobe malfunction" into the pop culture lexicon. Janet then released her own comments, absolving MTV and all the corporations involved in the Super Bowl of what happened and saying "it was not my intention that it go as far as it did." Justin would later claim he was under the impression Jackson's red bra would be revealed, but that's it, and started to distance himself from her entirely.

"There was two people on stage. He did the pulling. Janet's breast didn't just jump out," Janet's brother, Tito Jackson, said during the doc. 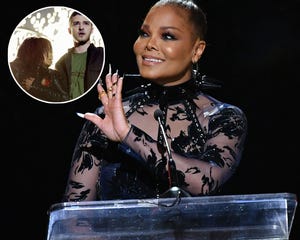 She would go on to release another statement on video, saying that, "Unfortunately, the whole thing went wrong in the end."

According to the New York Times, Timberlake went so far as to show up to CBS offices to give an in-person apology to president Les Moonves -- and was reportedly "pretty teary" about it as he did so. As backlash for Janet kept building, FCC complaints rolled in.

"Some people, I think, lost their jobs over it," recalled McCarthy-Miller. "Others had to be deposed. And that was scary."

Both artists were scheduled to appear at the Grammy Awards that same week, also on CBS. But, in light of the Super Bowl fiasco, the terms of their appearances were changed at the last minute by Moonves.

"Even though Janet and Justin both gave written apologies, it was Les Moonves from CBS who decided that if Janet Jackson and Justin were going to be on the Grammy awards, they would have to publicly apologize during the show," said Ron Roecker, VP of Communications for The Recording Academy. "That's where it got very sticky."

While he said the Recording Academy never "uninvited" the duo, CBS was adamant they make formal apologies on air -- "and Justin decided to be on the show and Janet decided not to be." He added, "Was it because of the apology? I don't know. One can assume. Both artists leading up to the Grammy Awards had our full support ... [but] when you have someone who's paying your bills for the entire year, you have to listen to them."

According to Matt Serletic, former CEO of Virgin Records -- Janet's label at the time -- they believed the demand to apologize again "felt like another request for something that was an accident ... so she didn't do it and good for her."

Justin apologized again during his acceptance speech as he picked up awards for Best Pop Vocal Album for "Justified" and Best Male Pop Vocal Performance for "Cry Me a River" -- and his career would only skyrocket from there, while Janet's suffered immensely. There was a lot of talk about her music getting "blacklisted" from radio and MTV, with a Clear Channel exec claiming that while there was no "system-wide blacklist" of her music, local markets could have pulled her music if they believed their listeners no longer wanted to hear it after the controversy.

Said Tito: "I don't know if 'blacklist' is the word that they tried to do to my sister, but it sure seemed liked they were trying to diminish her career and her ability." His son Taj added, "We all knew as a family they were trying to sabotage Auntie Janet. Her career suffered because of someone whose ego was hurt."

The FCC eventually fined CBS $550,000 for the fiasco, though the network never paid a dime after they won an appeal. Timberlake, meanwhile, was invited back to perform during the Super Bowl Halftime Show in 2018, sparking a #JanetJacksonAppreciationDay trend on social media as many protested his performance and wondered why his career didn't suffer as well. The answer, according to anyone with eyes: racism and misogyny.

"I have never been invited, I know you're shocked, to ever direct again," joked McCarthy-Miller. "It's okay, my feelings aren't hurt."

Jackson would eventually get her flowers though, when she was inducted into the Rock and Roll Hall of Fame. She eventually got a very public apology from Timberlake as well, sparked by the public shaming he received after "Framing Britney Spears" highlighted his treatment of both Spears and Jackson earlier this year.

"I understand that I fell short in these moments and in many others and benefited from a system that condones misogyny and racism," he said in February 2021. "I specifically want to apologize to Britney Spears and Janet Jackson both individually, because I care for and respect these women and I know I failed." You can read his full statement here.

Both Timberlake and Jackson declined to comment on the special -- though Janet is dropping her own 2-part A&E documentary, "Janet," in January 2022. She's expected to address the Super Bowl incident in detail herself then.