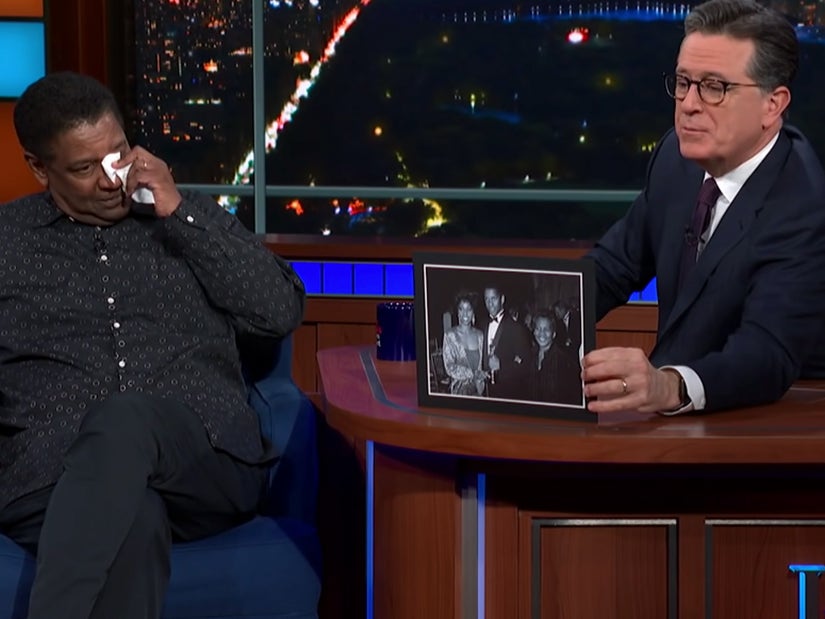 The 66-year-old wiped tears away and revealed he hadn't cried at his mother's funeral.

During an appearance on "The Late Show with Stephen Colbert", actor Denzel Washington opened up about his mission to honor his mother's memory through his work.

When talk show host Stephen Colbert, 57, shared Washington's previous statement on how "a son is a mother's first true love" and asked how his work pays tribute to her legacy, the actor started to choke up with emotion.

"A mother is a son's first true love. A son, especially that first son, is a mother's last true love," Washington began before he took a moment to compose himself. "That's... I'm getting choked up. Sorry."

"You know when I knew that? When I saw my son John David Washington handle my wife," he laughed. "I don't care what he does, she's going 'alright baby.' That's when I realized that bond."

"[Mother] was there for everything and she went home," he concluded before asking Colbert for a tissue.

Denzel began to wipe tears from his eyes as the talk show host revealed a picture of Washington and his mother at the 1990 Academy Awards after the star had won "Best Supporting Actor" for "Glory."

"This is terrible!" the 66-year-old cried and revealed that he hadn't cried at his mother’s funeral. When Colbert asked why he didn't think he shed tears at the service, Washington laughed and said, "I don't know, I guess I saved it up for you! For crying out loud!"

Denzel then admitted that he didn't know if he was his mother's favorite but said, "I gave her the hardest time, I can tell you that."

He concluded his sentiments by telling the audience to hug and love their mothers.

Washington’s late mother Lennis Washington passed away at the age of 97 on June 14, 2021. According to her obituary, Lennis was born in 1924 and grew up in Harlem, New York.  She married Rev. Denzel H. Washington Sr. in 1949 and raised three children – her daughter Lorice, and sons Denzel and David.