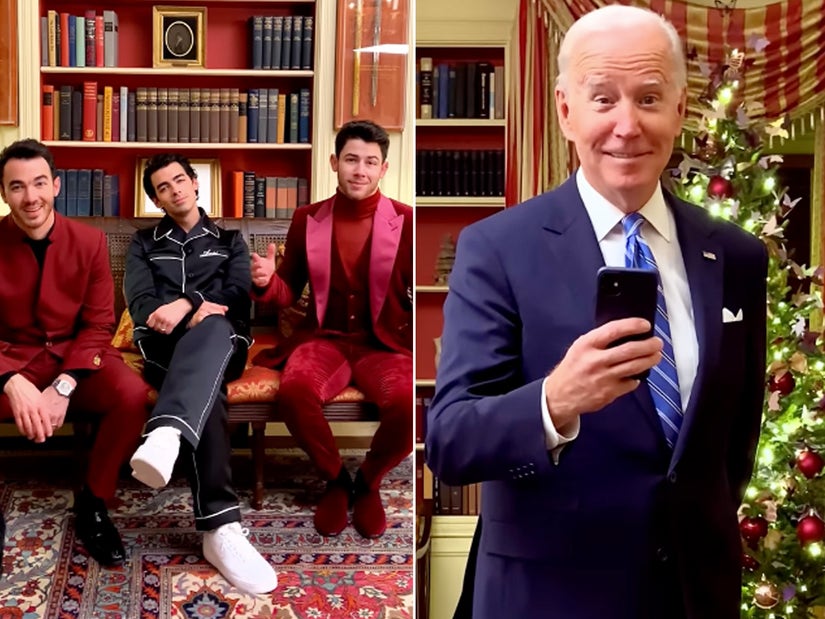 The Jonas Brothers may have just filmed the best TikTok of the year -- and it featured one of the most well-known people in the world: President Joe Biden.

Joe, Nick and Kevin Jonas teamed up with the POTUS to make a TikTok video using the viral "Joe Byron" sound -- and it was absolutely hilarious.

In the clip -- which appeared to have been filmed in the White House and was posted on Friday -- the boy band lipsynced to the popular TikTok audio, which is a compilation of sound bites from Sidetalk interviews.

The JoBros video began with Joe, 32, -- who was wearing a black, silk pajama-style ensemble -- mouthing, "bing bong!" Nick, 29, -- who was rocking a magenta and dark red suit -- then said, "Are you vaccinated?" In reply, Kevin, 34, -- who was also dressed in a dark red suit -- jumped out of what appeared to be a large, festive-looking box and said, "Yes sir!" Joe then popped out of the box as well, chiming in with the line: "Ey yo!"

The video continued with the brothers on a couch. Joe asked, "What do you want to tell Joe Byron right now?" In response, Kevin mouthed, "What's up baby?" and Nick finished the line, saying, "Take me out to dinner."

After the audio concluded, Kevin then asked, "Did we get it?" The footage then revealed Biden holding up a cell phone. Replying to Kevin and his brothers, Biden, 79, said with a smile, "We got it."

Check out the video for yourself, above!

We can’t shout ‘get your booster’ from the rooftops of the White House, so we asked @PTXofficial to do us one better. Find a booster or vaccine appointment near you at https://t.co/S2DQV6MlBv. pic.twitter.com/r1jwgbHEZ2

"EYYYY YOOOO," read the video's caption. The epic clip was shared across the Jonas Brothers' social channels, including TikTok, Instagram and Twitter. Joe, Nick and Kevin posted the clip on their personal social media accounts as well. In addition, the video was also shared by the White House's deputy press secretary, Karine-Jean Pierre, on Twitter.

Since the audio featured in the video brings up Covid-19 vaccinations, it's very well possible the band collaborated with Biden as a way to promote shots amid a surge of coronavirus cases in the United States in addition to the ongoing spread of the omicron variant.

Meanwhile, the Jonas Brothers weren't the only band the White House has teamed up with recently. The Grammy-winning acapella group, Pentatonix, filmed a video to urge people to get Covid-19 booster shots.

As shown in the clip, which was shared on the White House's social media profiles on Friday, Pentatonix -- which consists of Scott Hoying, Mitch Grassi, Kirstin Maldonado, Kevin Olusola and Matt Salee -- sang an original song about boosters.

"Get your booster. Just like a seat for a little kid. Just like the heat from a rocket ship," the group can be heard singing in the video. "Sometimes all you need is a booster."

The White House's social media accounts captioned the clip, "We can't shout 'get your booster' from the rooftops of the White House, so we asked Pentatonix to do us one better. Find a booster or vaccine appointment near you at vaccines.gov."