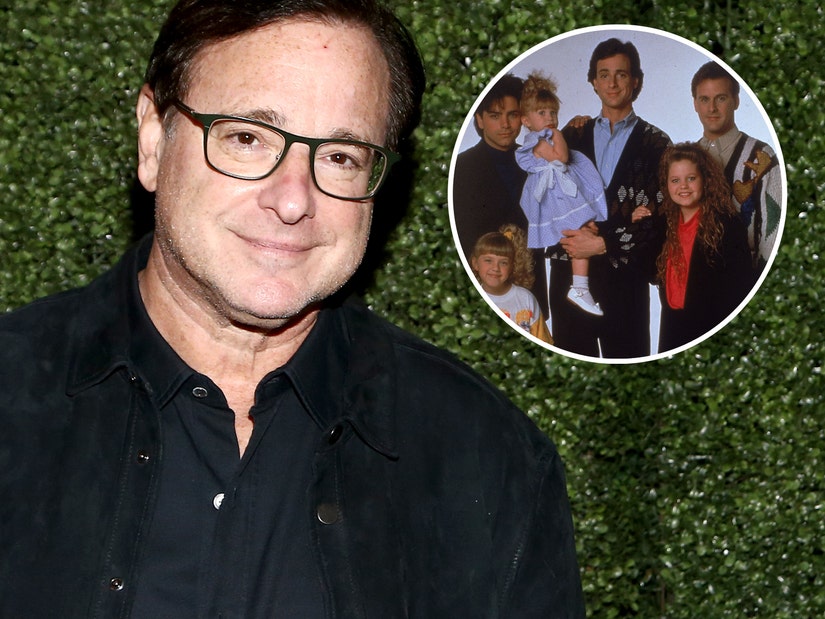 "I'm happily addicted to this s--- again," tweeted the comedian about doing standup comedy in what would be his final social media post. He was found Sunday in his hotel room.

Comedian Bob Saget, best known for his role as Danny Tanner on ABC's classic sitcom "Full House," as well as the recent "Fuller House" revival, passed away suddenly on Sunday while on tour, per TMZ.

His final social media post also came on Sunday, albeit in the middle of the night after he'd finished his Saturday set in Jacksonville, Florida. He was found by hotel security around 4 p.m. ET at the Ritz-Carlton hotel in Orlando, per the outlet. The circumstances of his death are unknown at this time.

"Loved tonight's show," Saget wrote in his final post. "Appreciative audience ... I did a 2 hr show tonight. I'm happily addicted to this s--- again." He then invited fans to check out his website for upcoming dates.

Loved tonight’s show @PV_ConcertHall in Jacksonville. Appreciative audience. Thanks again to @RealTimWilkins for opening. I had no idea I did a 2 hr set tonight. I’m happily addicted again to this shit. Check https://t.co/nqJyTiiezU for my dates in 2022. pic.twitter.com/pEgFuXxLd3

A longtime standup comedian, Saget found a whole new audience, and a new identity as America's dad, during his tenure as widower Danny Tanner on the centerpiece of ABC's TGIF lineup from 1987-1995. Saget would return to the role in a recurring capacity for the sequel series, focusing on his character's daughters, on Netflix from 2016-2020.

He solidified his star status in the '90s by performing double duty on ABC by also hosting the long-running "America's Funniest Home Videos" series from 1989 to 1997. His family-friendly tone and corny jokes were certainly classic "dad" material, while as far removed as his far more risqué standup material as possible.

"We are devastated to confirm that our beloved Bob passed away today. He was everything to us and we want you to know how much he loved his fans, performing live and bringing people from all walks of life together with laughter," the Saget family -- which includes wife Kelly Rizzo and his kids Aubrey, 34, Lara, 32, and Jennifer, 20 -- said in a statement to CNN. "Though we ask for privacy at this time, we invite you to join us in remembering the love and laughter that Bob brought to the world."

As news of his sudden passing was revealed, co-stars, comedians, friends and celebrities alike began to share their condolences on social media.

John Stamos, who starred alongside Saget in both "House" series, tweeted, "I am broken. I am gutted.  I am in complete and utter shock.  I will never ever have another friend like him.  I love you so much Bobby."

Many other cast members sharing tributes included Mary-Kate and Ashley Olsen. "Bob was the most loving, compassionate and generous man," they said in a statement. "We are deeply saddened that he is no longer with us but know that he will continue to be by our side to guide us as gracefully as he always has. We are thinking of his daughters, wife and family and are sending our condolences."

Andrea Barber shared a lengthy tribute as well, writing, "This one hurts. 💔 He had the biggest heart of anyone in Hollywood. He gave the biggest hugs. I am gutted that I will never be able to hug him again. Bob ended every text, every interaction with 'Love you.' Didn't matter how long or short we'd been apart. He loved so deeply and so fiercely," she wrote. "And he never hesitated to tell you just how much you meant to him. This is the greatest lesson I learned from Bob Saget - don't hesitate to tell people you love them. I feel at peace knowing that Bob knew exactly how much I adore him."

"Rest well, my dear friend," she concluded. "I have no doubt you are making everyone in Heaven laugh until their cheeks hurt, just as you did here on Earth."

Jodie Sweetin shared a lengthy tribute as well on Monday morning -- read her post in full above.

"Fuller House" star Juan Pablo Di Pace also shared, "An amazingly kind and generous man left us today. Will miss you a lot Bob. So so much…"

The core cast -- including Sweetin, Bure, the Olsen, Stamos, Lori Loughlin, Coulier, Barber, Scott Weinger and creator Jeff Franklin -- later released a joint statement Monday reading, "Thirty-five years ago, we came together as a TV family, but we became a real family. And now we grieve as a family. Bob made us laugh until we cried. Now our tears flow in sadness, but also with gratitude for all the beautiful memories of our sweet, kind, hilarious, cherished Bob. He was a brother to us guys, a father to us girls and a friend to all of us. Bob, we love you dearly."

"We ask in Bob’s honor, hug the people you love. No one gave better hugs than Bob," the statement concluded.

"I love you, Bob. I will never forget you. I will visit you often in my memories, and I hope I get to see you in my dreams," shared John Mayer on Instagram. "I will tell my kids about you. I'm taking you with me forever. I love you, Bob."

"I'm speechless. Bob Saget was the best," wrote Kat Dennings, who appeared opposite Saget on the short-lived sitcom "Raising Dad." "So kind. I was his TV daughter for one season and he was generous, protective, caring and wonderful. He talked about his kids constantly. Rest In Peace."

Beautiful Bob Saget passed away today at 65. He had a big, big heart and a wonderfully warped comic mind. He gave the world a lot of joy and lived his life for goodness’ sake. :’^} pic.twitter.com/QVSITsfaVj

I’m shocked and saddened to learn that Bob Saget is gone. A great friend and one of the funniest and sweetest people I have ever known. My love to his beautiful family.

So sad about Bob Saget. Rest In Peace.

BOB … it was great to know you … Oh are you going to make God blush https://t.co/73YihoSRSr

He was truly one the nicest people EVER. Really. Just wow I’m sad about this. Rip to #BobSagat

This was TWO DAYS AGO. Oh my god pic.twitter.com/lxQlKZxtlg

Oh no. RIP Bob Saget. Truly one of the nicest guys and so funny. Very sad.

I’ll miss Bob Saget so much. He was as kind as he was funny.

There wasn’t a kinder person in Hollywood than Bob Saget. I am having trouble wrapping my head around this. I do not want to believe this. It’s all too much to handle.

He had the biggest heart and wore it on his sleeve. He was so generous with his feelings. A mensch. #BobSaget

The news about Bob tonight is so very very sad. What a kind and sweet person, so full of life and light, constantly lifting up those in his world. I’m at a loss. My deepest condolences to his family. https://t.co/z7B8Etrb5N

Nice guys DO finish first. Beyond his considerable talents, Bob Saget was a kind and gentle presence that always made every one in the room feel at ease. A sweeter man there never was. And a wicked sense of humor that would make you howl with laughter.
God bless you, Bob pic.twitter.com/eUgXP1i1kl

I have always and will always love Bob Saget. https://t.co/dAlMU913Wc

This first week of 2022 has been too much. Now Bob Saget? I am heartbroken. RIP pic.twitter.com/DjpCOOsO6e

Seeing this tweet from B.J. six days ago and I agree. You couldn’t find a nicer or sharper wit than Bob Saget. Shocked and devastated. 💔💔💔 https://t.co/QgiYCW5H92

I am extremely saddened to just hear of the passing of my friend Bob Saget. You were always hilarious and kind. You made my life and so many other peoples lives better Bob. Rest In Peace.

Bob Saget was funny and kind, but also, let’s not forgot, for people my age, he was the original Hot Dad. It’s not important but it’s true

The only people who said terrible things about Bob Saget were his best friends. 💔

Still in shock. I just spoke with Bob a few days ago. We stayed on the phone as usual making each other laugh. RIP to friend, comedian & fellow Aristocrat Bob Saget. pic.twitter.com/TDKT8JoULq

Oh god. Bob Saget!!! The loveliest man. I was his TV daughter for one season and he was always so kind and protective. So so sorry for his family.

Heartbroken to hear the news.

Bob Saget was as lovely a human as he was funny. And to my mind, he was hilarious. We were close friends and I could not have loved him more. pic.twitter.com/TM8r1hzCfO

Deeply saddened to learn of the untimely passing of comedian Bob Saget. Beloved by millions as America’s Dad, he was a regular presence in our living rooms, bringing to us the funniest videos and countless belly laughs. Gone too soon, like so many of the brightest souls.

Sail on my friend Bob Saget With your huge heart and abject lunacy,my condolences to his daughters & other family

Bob Saget was so kind and when you spent time with him he made you laugh hard. He loved to be funny and he was hysterical. He was also there for everyone. A beautiful soul. pic.twitter.com/jQuv5cAkuT

I know that people lose loved ones, good people, every day. No one gets a pass. But the loss of Bob Saget hits deep. If you didn’t know him, he was kind and dear and cared about people deeply. He was the definition of “a good egg”. Too soon he leaves. #RipBobSaget

Bob Saget was the kindest, warmest male comic there was. I loved it whenever I saw him, or heard from him. He was the guy that everyone loved. Love you, Bob Saget. You will be missed and loved for a long time.

Bob Saget was an amazing comedian and a really warm and generous man. It doesn’t seem real to me yet, I just saw him last week and it’s hard to even imagine him not being here. He was the best. pic.twitter.com/kaYuqgp7QN

RIP Bob Saget. Everything I start to write about him just feels inadequate. He is universally loved. I am so grateful he was my friend.

Bob Saget was one of the nicest guys in this business. My heart is broken. RIP @bobsaget #legend

RIP Bob Saget, thank you for such a unique and hilarious ride.

Shocking and sad news tonight. Bob Saget was such a caring and supportive person. So many memories shared between two proud @templeuniv graduates on the night of this photo and many moments that followed. pic.twitter.com/AmNj26dLIz