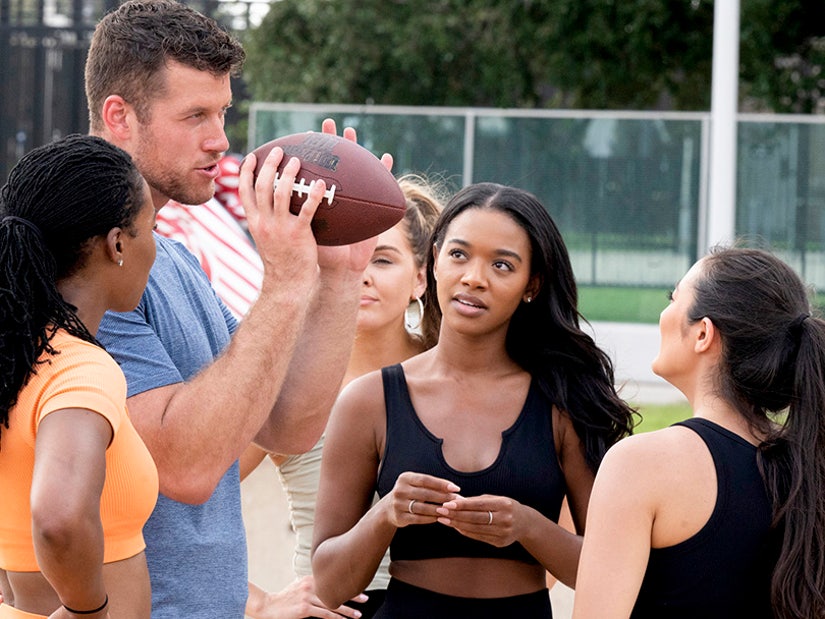 Things get violent as ladies work out their grudges in a game of tackle football -- but losing doesn't stop one from crashing the after-party anyway!

Clayton Echard was clearly hungry this week as food was a big part of both dates in this week's episode of "The Bachelor." Luckily, violence was only part of one of them.

But before we could get to any of that, there was the fallout of the ongoing feud between Elizabeth and Shanae -- which actually also became largely about food by the time Clayton pulled them aside tonight to try and hash it out.

Shanae is the season's second villain, with Clayton quickly dispatching Cassidy after learning about her hookup buddy waiting back home. But this particular drama he can't seem to wrap his head around. We suspect it's because he thinks Shanae is really hot, and that makes it harder for him to think clearly.

All season long, he primarily talks about how hot these women are, with their other traits secondary to their general hotness. That's about the only reason we can explain how it doesn't seem to matter what Shanae says, he's going to believe her ... or want to believe her ... or at least want to make out with her.

And she knows it.

There's also the fact that you can sometimes tell when someone is lying, and Elizabeth -- who to this point has done nothing wrong that we can see -- inexplicably lied during Shrimp-gate to Clayton. She denied being in the hot tub when Shanae offered the shrimp she had cooked.

For some reason, producers didn't bother to show whether or not she was in a quick flashback (and we know they love those when it's dramatic), but she was. Did it not serve Shanae's villain edit to show that Elizabeth lied? We'd also like to know why Elizabeth chose to lie as it gave Shanae righteous fuel.

Shanae effectively admitted to making up most of her beef against Elizabeth, but here Elizabeth gave her something real to focus on, and that's just what Shanae did. There was no reason to lie about being in the hot tub or not because what about the fact Shanae pigged out most of the shrimp Elizabeth cooked just to be a jerk? Elizabeth had truth on her side, but she opted for the lie.

In the end, Shanae's hotness carried her through a Rose Ceremony that happened after a canceled Cocktail party. Elizabeth was sent home.

Clayton never clarified why he kept one over the other explicitly, but it seems he did believe Shanae's version of events. Also out were Kira and Melina, leaving Clayton with his Top 15.

The night would see no further eliminations, because despite his hope that sending Elizabeth home would eliminate the drama -- that's not at all what happened. At least he got to enjoy some quality mellow time with his One-on-One before all hell broke loose again.

"The Bachelor" flew everyone to Houston so he and Rachel could ride horses and crash a barbecue. We're not sure why they needed to leave the Ranch for this particular date, but everyone seemed happy about it, so we'll let them have it.

This was one of the most low-key dates we've ever seen, and that includes these past few sequestered resort seasons. All they did was ride horses, show up at a family's barbecue, help them cook the food, eat and talk.

It's clear that Clayton already has feelings for Rachel because the effort on this one was really phoned in. It helps that they're cute together. But this is definitely the kind of date you set up for someone who's already a clear front-runner. He must have mentioned a dozen times how beautiful she is ... and smart.

We will give him credit for saying that he would be supportive of her passion and career as a pilot, which is not something she's always had. That support really touched her, too, which is kind of a sad statement about a lot of men out there. Why are they so afraid to let their women shine?

"I will never dim your light," Clayton told her as they danced and made out awkwardly in front of Restless Road, doing their best to ignore the slobbering and face sucking happening feet in front of them while they're just trying to do their jobs.

From crashing a barbecue to crashing into one another, Clayton made sure he got to eat before sending the ladies into the Texans' stadium to smash one another up for love. After all, football is a big part of his life, so that includes more barbecue and tailgating, right?

Did anyone remember the shrimp? Shanae likes to eat shrimp in front of the other girls for dramatic effect now. She did it before the cocktail party was canceled. And you know she had something to do with her team being named Shrimp Stampede ... that or producers just like to stir s--- up.

Honestly, they may not have thought this competition all the way through. Usually it's fun watching these non-athletes toss the pigskin around, laugh and play around. This time, though, there is actual beef heightening the tension. And there's an Olympian athlete in the mix!

It wasn't even close, with Marlena practically carrying her team to a 21-0 victory over Shanae and her Shrimp Stampede. That meant it was the after-party for the purple team, while the blue team had to go back to the hotel.

Fueled by Elizabeth actually lying and the ongoing hate of the whole house, Shanae actually got a little worried because she'd overheard Genevieve, Sierra and Gabby say they'd intended to tell Clayton all about her that night at said after-party.

Gabby was on the losing team with her, but that left Genevieve and Sierra alone with Clayton all night long to say whatever they wanted. And she knew Sierra still had beef because Sierra was not shy about slamming Shanae into the ground during the game (even when she didn't have possession -- Sierra claimed later she didn't even know this was a rule).

As expected, both Genevieve and Gabby said their piece, but then Shanae came waltzing in and it quickly became clear that Clayton thinks she's hotter than either of the other two women. All it took was Shanae to whip out her sad story about the other ladies picking on her and he was making out with her on the bar.

Never mind that she wasn't even supposed to be on this portion of the date. Never mind that multiple women have given him red flags about her. He is determined to take her word over every one of them that she is a victim of their bullying, and not that she targeted Elizabeth almost arbitrarily.

After making out with Clayton, Shanae confronted Genevieve and Sierra about talking s--- about her to Clayton -- like she did with Elizabeth -- and then took the group's trophy earned that day in football and threw it in the bushes like it was trash. That aggression targeted everyone on that team and says a lot about her character, too.

Clayton has to see it at some point, right? Hot only gets you so far, right? Does Shanae win this whole season? She's gotta get through a dreaded Two-on-One next week if she's going to. The fact that's happening doesn't bode well for her, because it means her drama continues to dominate Clayton's time and eventually he'll get sick of it.

Unless he remembers how hot she is.