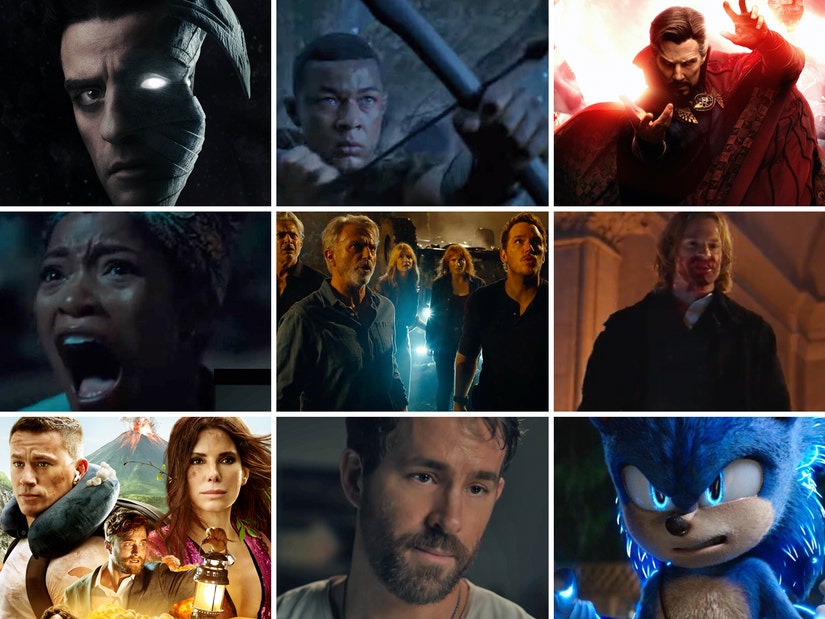 Marvel dropped new footage from Moon Knight and Doctor Strange, while trailers for Jordan Peele's Nope and the next Jurassic World have also arrived.

The Super Bowl may be a star-studded affair for Game Day ads, but for the past couple years, it's been a little lighter when we start talking about commercials for new films and upcoming TV series.

Of course, in 2021, we were still in the tight grip of a global pandemic and fluctuating release schedules made for a pretty low-key affair on the trailer front. Disney+ and Universal did the most, dropping footage from "The Falcon and the Winter Soldier," "Black Widow," "WandaVision" and "F9" ... and, once again, those two still did a lot of the heavy lifting.

Marvel started trending with a brand new "Doctor Strange Un the Multiverse of Madness" trailer moments before kickoff -- a trailer which many believe includes the arrival of Sir Patrick Stewart's Professor X. His voice can be heard briefly, though he's not shown on camera.

It also appears Captain Marvel -- possibly a Maria Rambeau variant -- will face off against Wanda, in a fight that's sure to be explosive.

The story follows Isaac's Steven Grant, who's described as "a mild-mannered gift-shop employee, who becomes plagued with blackouts and memories of another life." According to Marvel, "Steven discovers he has dissociative identity disorder and shares a body with mercenary Marc Spector. As Steven/Marc’s enemies converge upon them, they must navigate their complex identities while thrust into a deadly mystery among the powerful gods of Egypt."

Amazon's Prime Video debuted the first footage from its "The Lord of the Rings: The Rings of Power" TV series, one of the most expensive TV shows ever made.

The trailer certainly makes it look like all that money went to good use, as the show -- which takes place thousands of years before the events of J.R.R. Tolkien's "The Hobbit" and "Lord of the Rings" -- looks cinematic as hell.

AMC+ also dropped a promo that included the first footage from its upcoming "Interview with the Vampire" TV series.

After teasing its 2022 slate earlier this month, Netflix dropped an extended look at The Adam Project during the game.

The morning of the Big Game, Universal dropped its first real look at Jordan Peele’s third horror outing, which is a big “Nope.” Shrouded in secrecy even before its big Super Bowl reveal, fans finally got a hint at the film’s setting -- the only Black-owned horse training ranch for Hollywood -- and characters (Daniel Kaluuya, Keke Palmer and Steven Yeun) while keeping its terrors still somewhat close to the vest.

That secrecy helped elevate “Get Out” and “Us” to the upper echelons of fear. This time, Peele asks us, “What’s a bad miracle?” Creepy visuals and bizarre weather (or extraterrestrial) phenomenon promise a high-stakes, high-flying horror experience when the film drops July 22, 2022.

On Thursday before the game, Universal dropped the first full trailer for "Jurassic World Dominion," so fans can probably expect a shorter version of that to play during the main event as well.

The movie features the return of OG "Jurassic Park" trifecta Laura Dern, Sam O'Neill and Jeff Goldblum, as dinosaurs run amok in the real world after escaping from captivity. Chris Pratt and Bryce Dallas Howard are also back.

Paramount also debuted a :30 spot for "The Lost City" early, which aired during the pre-game as well. The movie stars Sandra Bullock, Channing Tatum, Daniel Radcliffe and Brad Pitt, with Bullock playing a romance writer who is kidnapped by a billionaire (Radcliffe) hoping she can lead him to a lost treasure. Tatum plays one of her cover models, who hopes to prove he's a real hero.

Paramount also dropped its Big Game Spot for "Sonic the Hedgehog 2" early, highlighting the additions of Tails and Knuckles to the sequel. Colleen O'Shaughnessey voices tails, while Idris Elba will voice Knuckles in the flick.

In the movie, "Sonic teams up with his own sidekick, Tails, and together they embark on a globe-trotting journey to find the emerald before it falls into the wrong hands." Jim Carrey and James Marsden return, as does Ben Schwartz as the voice of the titular video game character.

The movie races into theaters on April 8.

See all the celebrity ads from the Super Bowl below: 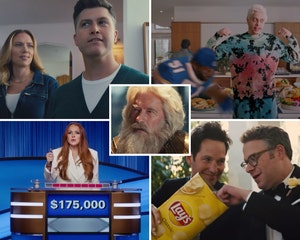