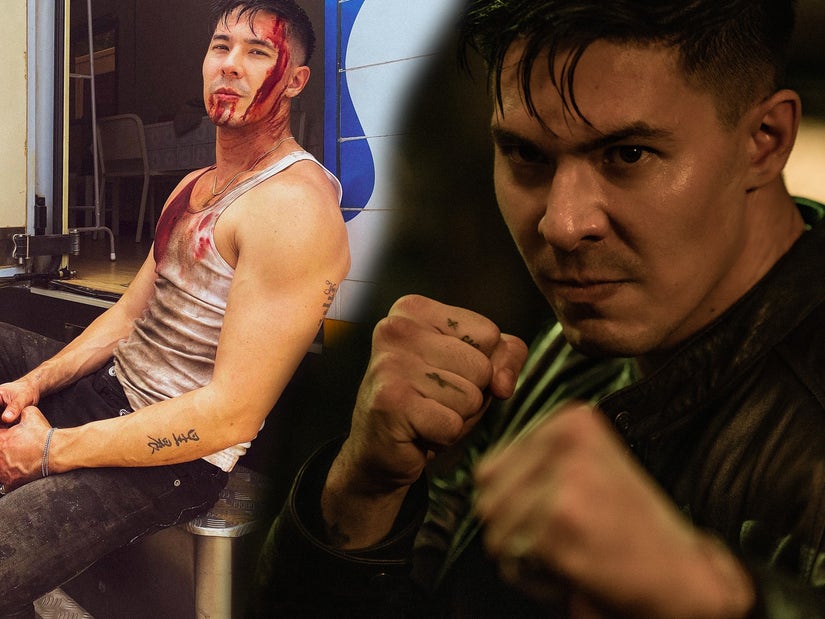 The actor opens up about potential sequels, Asian stories getting their worldwide due and his, uh, "nudie sock."

He may be in familiar territory, but Lewis Tan pushes himself outside of his comfort zone in the new Netflix film "Fistful of Vengeance," a movie sequel to the streamer's "Wu Assassins" series.

Mixing impressive martial arts, an incredibly attractive cast and rich mythology, the movie may be another in a line of stunt-heavy projects for Tan -- who previously starred in the recent "Mortal Kombat" movie and AMC's "Into the Badlands" -- but it's also a project that brought some new terrain for the actor.

First, there's the sex scene between his character, Lu Xin Lee, and newcomer Pearl Thusi -- the actor's first "fully nude" scene ever. Then, there's the fight choreography, which was made all the more complex after the filmmakers decided to use a high-speed robotic Bolt camera to shoot.

With "Fistful of Vengeance" premiering on Netflix and already landing on Top 10 charts around the world, the movie is the latest project featured on the streamer with a predominantly Asian cast to find success worldwide -- following shows like "Squid Game" and "All of Us Are Dead." It's a shift that Tan -- who is British-Chinese -- is proud to be a part of, especially after growing up as the son of a stunt coordinator, but never really saw faces like his own represented widely on film.

TooFab spoke with Tan following the release of "Fistful of Vengeance," where the actor opened up about turning their show into a feature film, the challenges of shooting the complex fight sequences, his "awkward" sex scene and his hopes for a sequel. He also spoke about how important that shift in visibility for Asian characters in pop culture is for those watching at home. 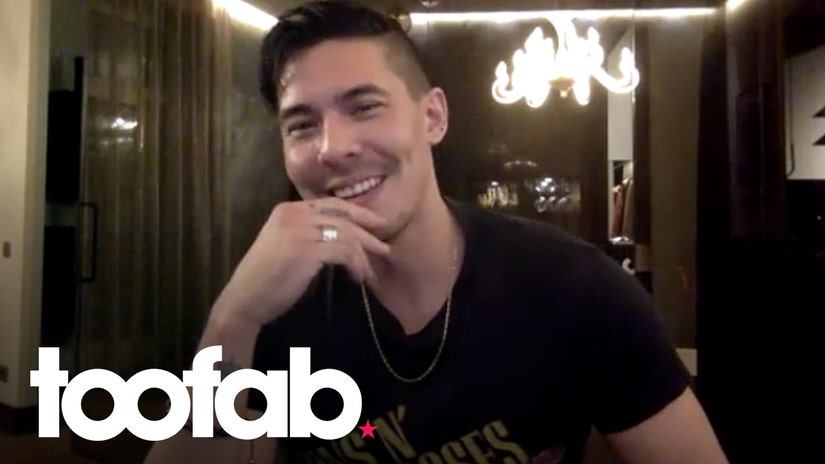 There are some killer fight sequences in this movie, just one after the next. Which was your favorite to film? I saw you post about the street cart fight this morning.

There's so many different styles of fighting in this movie and we wanted to make an homage to those amazing action films of the '90s and make it practical so you can see the martial arts, the Jackie Chan of using props and using noodles and pans and whatever we could find to fight. We also have some really complex intricate choreography designed around this amazing camera, this Bolt camera, which is never normally used for fight choreography. So those cameras are actually really dangerous. It's injured a lot of people before, you don't normally do fight choreography around it.

It's a robot arm and it's on a track and it moves super fast, so it's moving all around you. If you're not in the right place at the right time, if the camera hits you, it's going to be an issue. We did a whole fight scene around it, so why not, because we're crazy!

It's double, triple layered complexity. It's the character work, it's remembering choreography, we're doing a long take of 200-300 moves in one take, memorizing exactly where to land, making sure you're hitting your mark every single time and then doing it over and over and over until we get the perfect shot. We're just trying to step up the level and do things differently, give people something they haven't seen before.

Some of my favorite fight scenes have been those long one-takes. I don't know if you've seen Park Chan-wook's Oldboy, but that hallway fight is a classic and then Daredevil took that. Making iconic action sequences, that's one of my goals in my career.

As someone who has a huge stunts and martial arts background, are you always in training / learning new techniques between projects? How was your training for this different from other projects?

I think a lot of people, they don't quite understand what it takes to make a movie like that. If you watch this movie, it's action packed from beginning to end, we're fighting 10 hours a day for three months. They don't quite understand what that takes. What it takes is to be constantly training, you have to stay ready consistently. So, now I'm here in Hungary filming Shadow and Bone. Not a martial arts show, but I'm still training every day, whenever I can. You just have to stay ready, because as soon as I finish with this, I'll go into something else and I don't wanna be left behind. So just consistently leveling up, consistently learning new weapons, new skills and also, I love it, so I'd be training anyway even if I wasn't doing anything, even when I'm on vacation I'm training.

After I shot Mortal Kombat, I went to Thailand and I did a full muay thai camp for two weeks because, I don't know, I'm psycho.

How did production on this compare to Wu Assassins, the TV show?

It was crazy. What was different about this in comparison to the show is, in the show we shot a lot of stuff on a soundstage, in a studio. This is like 98% on location, moving through Thailand and I think it kind of builds the Wu Assassins world in a better way. That type of world building with real sets, real locations, I like that a lot more. For me, we took what we liked about the series and made it bigger, better for the film. You don't have to watch the series to enjoy this movie. It's also like finding the balance between the supernatural-fantasy elements and the martial arts, gritty, raw action. It takes time to find that. This is an original action series. A lot of stuff nowadays are remakes or based on an IP, comic and this is an original piece and I'm proud of it, for sure.

You have hot people fighting, awesome mythology in locations that are just cool to watch, what's not to like?

It's hot people throwing noodles at each other. That's how I pitched it!

Now, you're not only kicking ass in this … but come pretty close to showing some. I've seen you reposting all the comments about your sex scene. What was your initial reaction to the it and how does the reception make you feel?

You should see the ones I haven't reposted! I mean, look, in all seriousness it was a really beautiful experience. I'm working with Pearl Thusi, she's South African and you just don't see that type of scene a lot on screen with a Black girl and an Asian guy. I think it's something we need to see more of and both of us were proud and happy to do the scene.

It was weird because I haven't done a fully nude scene before and, uh, it's a bit awkward. I'll tell you a funny story I haven't told anybody ... I don't know if I should say this actually. It's like, Pearl was really great to work with and she made things really comfortable. We talked about everything beforehand with the director. It was nice. What I was gonna say, it's just awkward because you're wearing these like, it's like a nudie sock. That's all I'm gonna say, you can imagine!

It was tastefully done and it was beautifully shot so, yeah, I was happy.

This project seems to be having a great debut on Netflix, popping up #1 across the world. How does that make you feel and where do you think this franchise could go from here?

It's weird. The work is the satisfying thing for me but when people started posting, "Okay, you're Top 10 in France, in Germany, in Thailand, the U.K., Brazil, Mexico," this is crazy, Netflix viewership is insane, that's one of the beautiful things about working with them. You get that worldwide fan base. And when we hit #1 in the U.S., we were really proud of it because when we were on set we kept telling each other, it's not the biggest film, it's not a Marvel film, but we put our heart and soul in it. So on set we were talking about, "We're gonna make it, we're gonna hit #1" and that's something we said to each other every day. When we hit #1, we have a group chat and everyone was super happy about it. It means a lot that the fans like it and people are watching around the world.

What do you think the future does hold?

I would to do some more. I feel like we could kinda do, almost how 'Fast and the Furious' has done the range of it, they've flown to outer space now, I feel like we can kinda do a similar thing as long as we are stepping up the action each time. I don't know what we're gonna do with the next one, because this one was pretty intense, but I don't know, maybe we could jump out of a plane or something. We'll figure it out. I wanna do something unique each time, in a different location. I'd love to do another one, plus, I love working with the cast, they're awesome.

You touched on this, but it does seem like Netflix is a place where Asian stories are being seen more worldwide than ever before, how does it feel to be part of that shift? Because it is a shift and not a trend, now that people have more access to content they wouldn't have been able to see before.

It's not a trend, it's definitely a shift. It's definitely something I'm proud of because I come from a background in cinema. My father is a fight choreographer who did Batman with Tim Burton, he did Indiana Jones and the Temple of Doom, all these classic films. I grew up around watching how little we were represented forever, so to me, in my head, the chances of me doing what I'm doing now was very slim because I didn't see it.

Having said that, if a kid is growing up now watching me or [Costar Iko Uwais] or Joe Taslim or whoever, if they grow up watching Gemma Chan, their perspective is going to be completely different and that means the world to me. There's nothing more important to me than that.

That is the change we need to see and Netflix is one of those amazing studios that gives people a voice to say those things and show their perspective. I'm grateful for it.

"Fistful of Vengeance" and "Wu Assassins" are streaming now on Netflix.