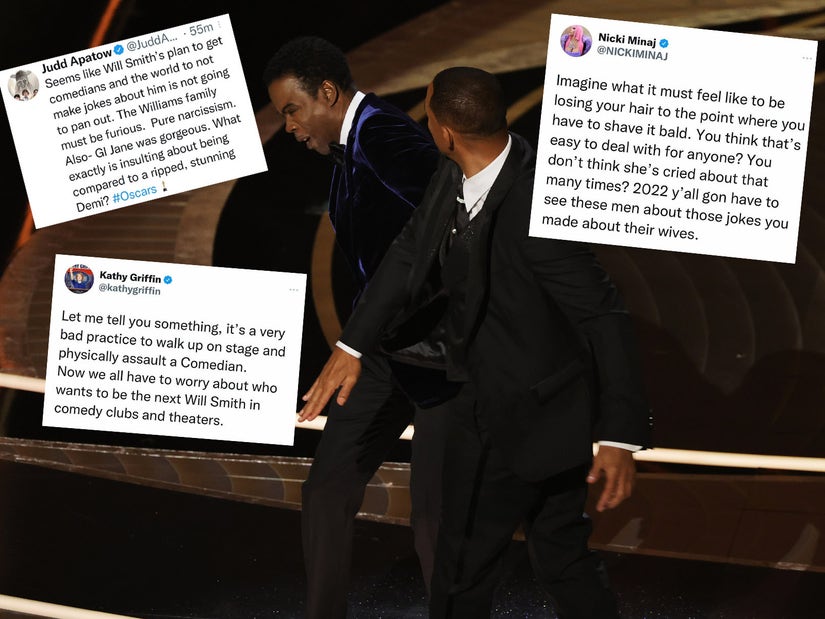 After a crack during the show itself, host Amy Schumer shared a more in-depth reaction to the slap on Instagram early Wednesday morning.

"I think we can all agree that the best way to unpack what happened is to stream my series @lifeandbethhulu and see me on tour this fall," she joked. "But for real. Still triggered and traumatized. I love my friend @chrisrock and believe he handled it like a pro. Stayed up there and gave an Oscar to his friend @questlove and the whole thing was so disturbing."

"So much pain in @willsmith," she concluded. "Anyway I’m still in shock and stunned and sad. Im proud of myself and my cohosts. But yeah. Waiting for this sickening feeling to go away from what we all witnessed."

Zoe Kravitz -- who appeared opposite Will Smith in 2013's "After Earth" -- took to Instagram to comment on the Chris Rock altercation on Tuesday afternoon.

Sharing two photos of her looks on both the Oscars red carpet and the red carpet for the Vanity Fair after-party, she made her disappointment with the situation pretty clear. "here's a picture of my dress at the show where we are apparently assaulting people on stage now," she captioned one.

"and here is a picture of my dress at the party after the award show -- where we are apparently screaming profanities and assaulting people on stage now," she added in the other.

In the comments, she was asked, "You don't support him defending his wife?" Her response: Nope."

Kravitz quickly started trending on Twitter after her posts, with many calling her out for going after Smith.

Jim Carrey also expressed his outrage over the incident during an appearance on CBS Good Morning on Tuesday.

"I'd have announced this morning that I was suing Will for $200 million, because that video's gonna be there forever. It's gonna be ubiquitous. That insult is gonna last a very long time," he said, before pointing to the reaction from the audience to Will's Best Actor win.

"I was sickened. I was sickened by the standing ovation," he added. "I felt like Hollywood is just spineless en masse. And it really felt like this is a really clear indication that we’re not the cool club anymore."

Ron Howard also spoke to Deadline about it, saying he's "Very friendly" with both parties involved.

"I was shocked. I wouldn't have expected this kind of behavior," he said. "I'm not on the Academy board and I can't speak for their process but I do know them and they will be very, very thoughtful. I will be curious to see what sort of decisions they make."

Thomas Haden Church was even more outspoken with his reaction, saying he thinks "Will Smith should be banned from the Oscars for the rest of his life." Church, who is an Oscar nominee himself for his work in "Sideways," added, "I think he should have his Academy membership stripped, but I don't think he should have the Oscar taken from him."

The Slap, as it will forever be known, didn't just send Chris Rock's face from one side of the screen to the other — it also appears to have sent Hollywood to opposite sides of the argument.

Was Will Smith's reaction to the comedian's joke about his wife Jada Pinkett-Smith a shining example of chivalry, or a regrettable instance of toxic masculinity?

A poll of their peers can't seem to decide.

Tiffany Haddish for one described the moment as "beautiful."

"When I saw a Black man stand up for his wife. That meant so much to me," the actress, who was front and center at Sunday's ceremony, told People.

"As a woman, who has been unprotected, for someone to say, 'Keep my wife's name out your mouth, leave my wife alone,' that's what your husband is supposed to do, right? Protect you."

"And that meant the world to me," she added. "And maybe the world might not like how it went down, but for me, it was the most beautiful thing I've ever seen because it made me believe that there are still men out there that love and care about their women, their wives."

Haddish claimed Rock is a friend of the couple, but had not run the joke by them.

"If she wouldn't have been hurt, [Will] probably wouldn't have said nothing," she said. "But you could see he was clearly… And they exploited it. They exploited her, so 'I have to do something'… He protected his wife. To me, I went up to her and said, 'You better s--k his d--k from the back, girl!' You better put that in your magazine! That's what I told her."

Nicki Minaj agreed, and at length.

I love Chris Rock. I don’t think he would’ve made that joke had he known what Jada recently shared- but between him & the whole team @ the #Oscars you mean to tell me not ONE of y’all heard this woman just share this heartbreaking story? #ComeOnSon … (continue to next tweet)

The husband gets a front row seat to his wife’s pain… he’s the 1 consoling her… drying her tears behind closed doors when those cameras go off. Social media has made ppl feel that these “husbands” won’t ever run into them in real life. (Continued again(last time)on next tweet)

You just got to witness in real time what happens in a man’s soul when he looks over to the woman he loves & sees her holding back tears from a “little joke” at her expense. This is what any & every real man feels in that instant. while y’all seeing the joke he’s seeing her pain

Imagine what it must feel like to be losing your hair to the point where you have to shave it bald. You think that’s easy to deal with for anyone? You don’t think she’s cried about that many times? 2022 y’all gon have to see these men about those jokes you made about their wives.

Liam Payne meanwhile told Good Morning Britain that while there were "three losers in that fight", there was beauty to be taken from the moment:

'I believe whatever he felt that he did, he had the right to do.'

'I had to leave my chair I'll be honest with you, it cut me really deep.'@LiamPayne reacts to the dramatic moment Will Smith hit comedian Chris Rock on stage at the Oscars for making a joke about his wife. pic.twitter.com/OGT4bA8jDi

While Smith had his defenders, he appeared to have far more critics.

Judd Apatow had one of the strongest reactions against — before deleting all of his tweets.

Hey @JuddApatow, I noticed you deleted your Will Smith tweets. Let me know if I got 'em all. pic.twitter.com/bSooFthahv

Before advising Amy Schumer not to go to the Vanity Fair afterparty because "Will wants to talk to you about the monologue", he then advised Rock to "take him for all his King Richard, I mean, Hitch money."

"He could have killed him," he replied to one commenter defending Smith. "That's pure out of control rage and violence. They've heard a million jokes about them in the last three decades. They are not freshman in the world of Hollywood and comedy. He lost his mind."

"Seems like Will Smith's plan to get comedians and the world to not make jokes about him is not going to pan out. The Williams family must be furious. Pure narcissism. Also — GI Jane was gorgeous, What exactly is insulting about being compared to a ripped, stunning Demi?"

"I have more hair on my back than on my head and I can take a joke about it," he added in another reply. 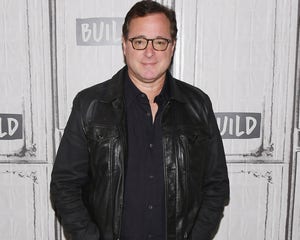 Kathy Griffin meanwhile made the point that Smith may have set a dangerous precedent:

Let me tell you something, it’s a very bad practice to walk up on stage and physically assault a Comedian.
Now we all have to worry about who wants to be the next Will Smith in comedy clubs and theaters.

Mandy Moore was another who was not impressed, re-sharing some damning takes on her Instagram stories:

"Violence is never 'proof of love'. That's a deadly idea that has fueled and excused domestic (and all) violence for far too long. Think hard about that take, please," was one opinion Moore agreed with.

"'Love will make you do some crazy things' is true toxic bullshit and I hope no children watching this learn a thing from him," read another. 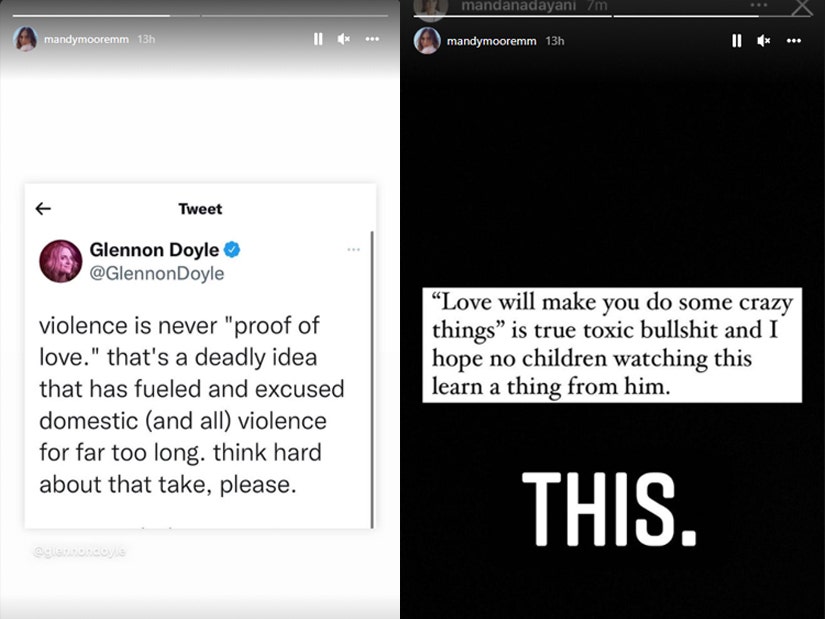 Rosie O'Donnell applauded Chris Rock's handling of the incident — and slammed the Academy for it's do nothing tweet.

they why did you do NOTHING ?

On his show Monday Morning, Howard Stern was also equally critical of Smith, and the Academy for its inaction.

"What you saw on TV was a guy with real issues," he told listeners, per The Hollywood Reporter. "That's crazy, that's crazy when you can't contain yourself."

"You don't provide security?" he asked. "You don't have someone come up there? Chris Rock was just trying to make people laugh at the f--king ceremony, which was so long and boring."

Stern also suggested that if a slightly more imposing star had made the gag — like Jason Momoa or Dwayne Johnson — Smith would have remained in his seat "like a bitch."

"People say, 'How did Weinstein get away with that for so long? How did that happen?' and it's like, we just witnessed it! Everyone saw an assault take place. Everyone in the room with their own eyes. And then if you would have tuned in 20 minutes later, you would have never known that happened."

Mia Farrow said anyone who was okay with it "has probably never been hit by a powerful man."

What i saw was one of Hollywood’s most powerful movie stars,stalk onto a stage to strike a comedian for an unfortunate joke about his (gorgeous) wife’s shaved head. Anyone who is ok with that has probably never been hit by a powerful man. As we advise our kids, “use your words”

“Love will make you do crazy things.”

Every woman who's ever been hit has heard that one.

Like many others, Maria Shriver was skeptical about Smith's "vessel of love" speech afterward:

We should never get to a place where we sit and watch a movie star hit someone on global television then, moments later, get a standing ovation while talking about love. #WillSmith #Oscars