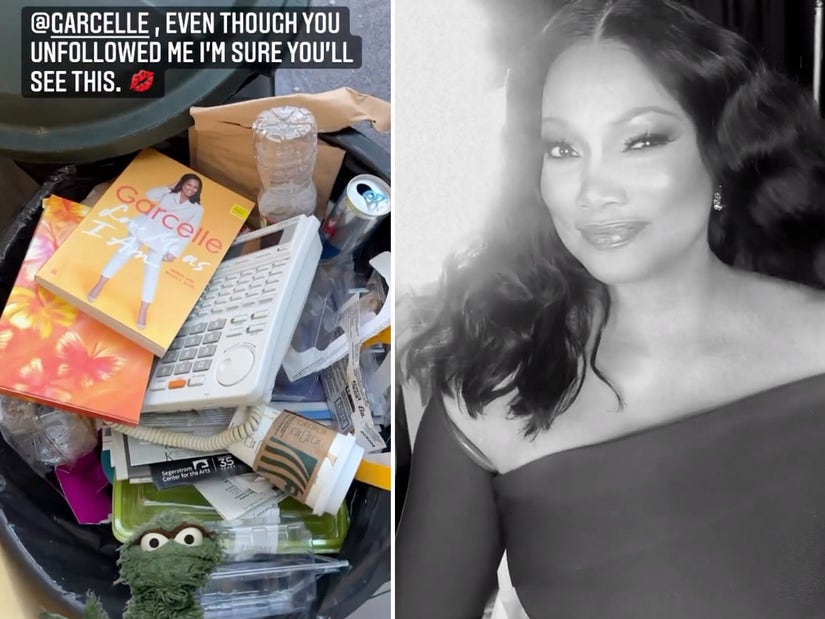 "Don't use my name to promote your book."

Erika Jayne gave a little more insight into why she decided to make a public display of trashing -- literally -- Garcelle Beauvais' new book, "Love Me As I Am" on Tuesday night while responding to fan questions on Twitter.

When asked straight out why she did it, Erika responded, "Her Instagram post. No need to use my name or very complicated legal and personal problems to sell her book. She has enough friends to help her."

The post in question was Beauvais promoting her book with a clip from the RHOBH trailer, in which she's seen telling Erika, "I don't have to make you look bad, you can do that on your own" (see in original story below).

She also said Garcelle "should cut me a check" for all the free publicity she gave the memoir with her stunt -- before adding, "Don't use my name to promote your book. Use your famous friends." Erika added that she wasn't "jealous" of Garcelle or Sutton Stracke, saying they "all have interesting, busy lives"

When another fan asked whether Beauvais "trashed the whole cast" in her book "to get publicity," Erika replied, "Just @LisaRinna @KyleRichards and @AmeliaGHamlin." She later added, "When you write a book it’s a choice what to write about. I kept it positive and about me and my friends, family. No need to include others."

Jayne also said her costar was "easily produced" and that's why she "goes in" on the women so hard. Garcelle has yet to respond.

Erika Jayne may have gotten an early copy of Garcelle Beauvais' new book, "Love Me as I Am," but it didn't take long for her to toss it into the trash!

On Sunday, the "Real Housewives of Beverly Hills" star shared an Instagram Story in which she placed the memoir into the garbage. She tagged Garcelle in the post, writing, "@Garcelle, even though you unfollowed me I'm sure you’ll see this."

She also included a GIF of Oscar the Grouch from Sesame Street in the post.

While Garcelle didn't respond directly, she did appear unbothered later in the day when she shared a video to her main feed showing her getting her glam on.

She captioned the post, "Mood😊😜 have a blessed day guys." RHOBH costars Crystal Kung Minkoff and Kathy Hilton both jumped into the comments, leaving fire and heart-eyed emojis, respectively.

It's unclear what triggered Erika's post, but the book doesn't really refer to her all that much directly. In fact, the only direct mention Jayne does get is a largely positive one, as Garcelle praises Erika's grit.

In February, Garcelle did confirm she was "not friends" with Erika and opened up about why she unfollowed her costar on social media.

"Did I know it was going to cause World War III? Unfollowing someone is huge apparently because it was breaking news all over the place," she joked. "Friends were texting me going, 'I can't believe you unfollowing her is such a big deal.' But it is. I guess it's a new way of saying I don't like you, but I don't want to tell you, so I'm just going to unfollow you."

"People were outraged! She was outraged too, I think," said Garcelle, before adding, "She could care less, I think."

The slight comes after the trailer for the upcoming season of RHOBH dropped last week -- a trailer in which Garcelle tells Erika, "I don't have to make you look bad, you can do that on your own."

Season 12 of RHOBH premieres May 11th on Bravo.

You know how else you can look bad all on your own? By not pre-ordering your copy of #LoveMeAsIAm before it comes out on Tuesday 😂 Get yours: https://t.co/NAPCJDNgAe pic.twitter.com/NSQuXOfZTb