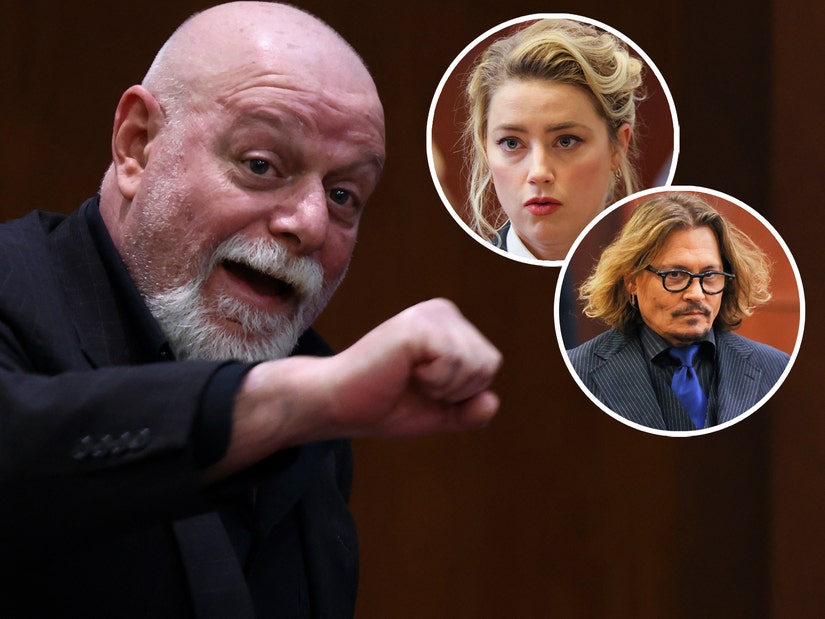 He admitted he didn't know "for a fact" whether she was wearing makeup or not -- and got choked up saying "it's not right what she did."

Johnny Depp and Amber Heard's defamation trial continued Wednesday in Fairfax, Virginia -- with one of Depp's childhood friends and neighbors taking the stand in his defense.

After Depp's sister, Christi Dembrowski, took the stand Tuesday and continued to be cross-examined this morning, artist Isaac Baruch -- who lived in the penthouse next door to the former couple -- was the next witness to be called by the actor's team. He started by saying he "loved" Amber and said "they were always loving with each other," "treated each other like gold" and always appeared to be in a "loving situation."

He claimed that while he never saw them physically violent with each other, Baruch said he did see them argue twice.

#JohnnyDepp's childhood friend and neighbor testifies that he never witnessed Depp and #AmberHeard get violent with each other.

"The first argument that I remember … there was a telephone argument. Johnny's at the kitchen table and he's screaming about something and on the other line, because he's on speaker, the other person is Amber," he claimed. "And she's in New York and he’s at the kitchen table and they're arguing. He's going, 'Who is it? Who is it?'" He said he eventually grabbed the phone and hung it up after the heated call continued.

He said the second argument was over how they could get Heard's sister, Whitney, out of the building.

He then claimed that on May 21, 2016, he saw shards of glass on the ground and a puddle of wine in front of the door to Heard and Depp's penthouse. Baruch said one of Heard's friends, Josh Drew, "poked his head out the door" and said they "had a rough day" when asked about the mess. He said that the next morning, which happened to be his birthday, he ran into Heard in the hallway and she told him, "Johnny came by last night, he got violent, so I'm changing the locks."

He said he saw no swelling, bruises, cuts or redness on Heard's face -- despite her saying Depp threw a phone at her -- but "Amber looking like Amber." He also said it "didn't look like she was wearing makeup then either" and he was surprised to see the photos of her with bruises that came out later.

Depp friend Isaac Baruch testifies he never saw a bruise on #AmberHeard's face the week of May 21 when Heard had told him #JohnnyDepp hit her. He said later he saw on the internet a photo of her with a bruise on her cheek...he thought, "What the hell is this?" @LawCrimeNetwork pic.twitter.com/7PpkS2E3Uz

During cross-examination -- which is still ongoing -- Heard's lawyer asked Baruch whether he was "familiar with what type of makeup Amber Heard uses on a daily basis," which he didn't. He was also asked that when he said it appeared like Heard wasn't wearing makeup, he didn't "know she was not wearing makeup." His response: "For a fact, no." The line of questioning implied Heard could have covered her alleged bruises with makeup and Baruch would be none the wiser.

Depp's lawyers also asked Baruch whether he had run into Elon Musk at their building at all. He said he had seen him twice -- once getting out of the elevator heading to Heard's penthouse and again on the former couple's balcony -- but both instances, he said, would have been in June or July 2016. Amber filed for divorce from Johnny in May.

He also claimed that in June, he saw security footage of Heard and her sister in which Whitney threw a "fake punch" at Amber, before they both started laughing.

When asked by Heard's attorney whether he would lie for Depp under oath, he said, "No, no, no." He also said he didn't pay rent to Depp for living in the penthouse and continues to live with Depp rent-free. He denied feeling "beholden" to the actor.

Heard's lawyer also asked about Baruch saying he was "angry" with the actress.

"About the phony pictures that were taken and put in tabloids and about the fake narrative and the way she's got a fraudulent DV claim to extort and blackmail a man, yeah, that got me frustrated, confused, angry, upset, yes," he said.

He then got emotional when asked whether he was still angry at her, first saying he hoped Amber could heal and move on.

"For Johnny, his family has been completely wrecked by all of this and it's not fair, it's not right what she did and what happened for so many people to get affected from this," he said, choked up. "It's insane how this happened."

Baruch got emotional on the stand "It's not fair. It's not right what she did..."

Heard's attorney asks him what if it's true, what if Depp has been physically violent with Heard? Depp's attorney objected, judge sustained. #JohnnyDepp #AmberHeard pic.twitter.com/XNJXfEhHdO

In an attempt to push back on Baruch's testimony that the two "were always loving with each other," Heard's lawyer asked whether he remembered "Mr. Depp referring to Amber with the term 'C---'?"

"Maybe in a text ... he's called me a c--- in a text, so it could be, I don't know how many texts," he responded. "If there's something specific you could show me, that would be a different story."

The texts were then presented for him to read, including one -- from October 18, 2016 -- which said Depp "hoped that Amber's rotting corpse is decomposing in the trunk of a Honda Civic" and another using the C-word slur. A third text from Depp said Heard "ruined such a f---ing cool life that we had for a while. I can't even look at the building anymore."

Baruch and Depp's lawyers pointed out the texts in question were sent months after Heard filed for divorce and made assault claims against the actor.