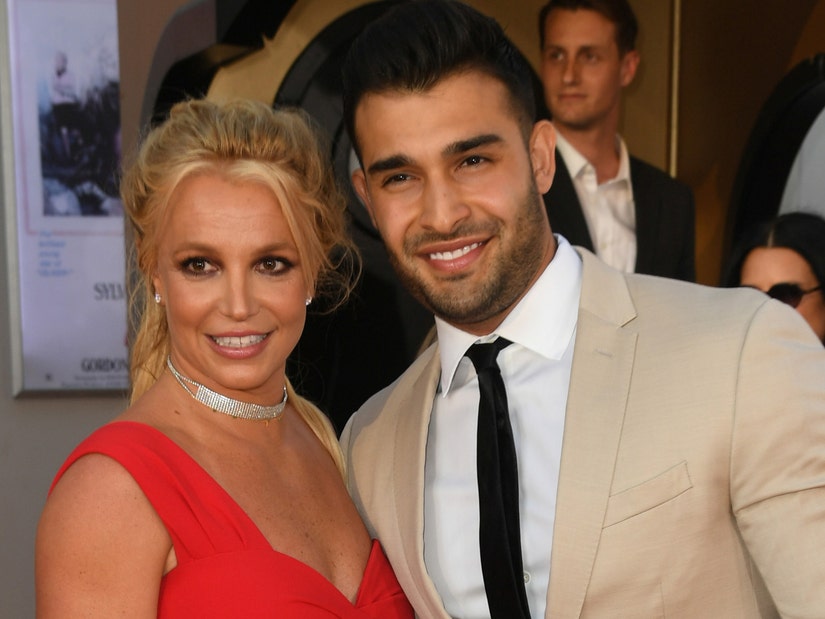 "You might be the princess of pop but mostly you're my princess."

Britney Spears and Sam Asghari are a match made in music video heaven! It didn't take long for the duo to connect on the set of Britney's "Slumber Party" music video back in 2016 and after they exchanged numbers, the rest was history! Despite Britney taking "nearly five months" to follow up on their dinner plans, the spark was still there when they finally grabbed sushi together on their first date.

Since then, they've faced the highs and lows of life together, with Sam supporting Britney through all of the hardships that came along with her conservatorship. With Britney now a free woman, the possibilities are endless for the engaged couple, who just announced they have a baby on the way!

Get all the details on Britney and Sam's relationship…

In 2016, Britney crossed paths with Sam for the first time when he starred in her "Slumber Party" music video. Between takes, Sam says he tried to break the ice by pretending to forget Britney's name and while his joke fell flat, there was still a clear spark between the duo. Throughout the entire day, Sam and Britney chatted nonstop and by the end, they exchanged numbers.

"We started talking about sushi and the things we like. [I said,] 'We should go to sushi one day…yeah, yeah, yeah, let's just do this and let's do this,' and he goes, 'Okay, I'll give you my number after the [shoot]' So it wasn't even like a serious thing; it was just one of those things where we were having a conversation to get through the experience, you know?" Britney said during an interview with AMP 103.7, via People.

It took "nearly five months" for the duo to connect again as Britney lost track of Sam's number. When she finally found it in her bag, she immediately called to make plans.

"I found his number in my bag. I was like, 'He is really cute. This guy is really cute.' So then I called him, and ever since then, he is just a really fun, funny person," Britney said.

In January 2017, Britney made things Instagram official when she shared a snap ringing in the New Year with Sam at Catch LA. In the cute photo, Sam put his arm around a beaming Britney. The couple even reportedly shared a midnight kiss later in the evening.

A month later, Britney and Sam stepped out for their first major Hollywood event in honor of the Grammys. Although the couple didn't walk the red carpet at Clive Davis' annual pre-Grammy gala, they did share some snaps on social media. Shortly after, they spent Valentine's Day with Britney's two sons at a $30 million mansion, courtesy of Airbnb.

Sam Invites Britney To Watch His Sister Walk the Runway

By March 2017, Sam was introducing Britney to his own family! The actor invited Britney to join him at designer Michael Costello's Art Hearts show during Los Angeles Fashion Week to watch his sister, Faye, walk the runway.

Britney Is Joined On The Road By Sam in Japan

Britney and Sam took their love international when he joined her in Japan for the first date of her worldwide tour in June of 2017. The couple shared some sweet moments on social media — and were clearly excited to be reunited.

"Came to Japan to see this one @britneyspears," Sam wrote on Instagram.

Sam continued to get to know Britney's children — Sean, 16, and Jayden, 15, — when he joined the family to celebrate their birthdays at Disneyland in September. Sam and Britney coupled up for some cozy snaps at the park and looked like they were having a great time.

The Couple Celebrate Their One-Year Anniversary

In January 2018, shortly after Britney and Sam celebrated their one-year anniversary, Britney took to Instagram to commemorate their time together with a scenic shot in front of a waterfall.

"I've been with this man for over a year. Every day he inspires me to be a better person and that makes me feel like the luckiest girl in the world!!  🌈🌸❤," Britney wrote on Instagram.

In April 2018, Sam and Britney stepped out for another major event — the GLAAD Media Awards. At the ceremony, Britney was honored with the Vanguard Award. The couple got glam and sat side-by-side at their table at the event. 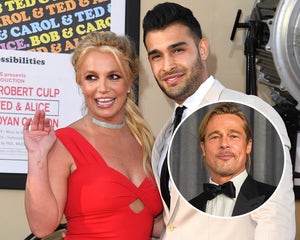 While Britney and Sam had previously attended Hollywood events, they walked the red carpet together for the first time at the "Once Upon A Time In Hollywood" premiere in July of 2019. Fans noticed that Britney was wearing a diamond on her ring finger and it immediately sparked engagement rumors.

In December 2019, Sam helped celebrate Britney's 39th birthday. On Instagram, he shared a funny video of the couple ice skating along with a sweet caption, gushing about their relationship.

"We live, we laugh, we argue, and most of all we LOVE ❤️ There's a reason why the world fell in love with you! You might be the princess of pop but mostly you're my princess 👸 Biggest Happy Birthday to you @britneyspears 🎆 My Ass still hurts from falling and breaking the ice 😂😂😂😂 you get it?" Sam wrote.

Sam Cares For Britney While She Recovers From a Broken Bone

A few months later, in February 2020, Sam cared for Britney while she recovered from a broken bone she sustained while dancing. Sam shared a sweet note dedicated to Britney on Instagram, telling her she was going to come back better than ever.

"When you break something it tends to heal stronger, [e]specially when you're my girl👌🏽 my lioness broke her metatarsal bone on her foot doing what she loves which is dancing 💃 Wishing her the best recovery so she can jump, run, and dance her butt off 💪🏽  #stronger," Sam shared.

The Couple Quarantine Together During the Pandemic

Not long after, Britney and Sam found themselves quarantined together due to the Covid-19 pandemic. The couple tried to make the best of the situation, sharing workout videos and other sweet moments from Britney's home. They even took a socially distanced trip to the beach, where they posed on bikes near the sand while wearing masks.

Sam Calls Out Britney’s Father For Controlling Their Relationship

In February 2021, Sam took a stand against Britney's father Jamie shortly after the premiere of a New York Times documentary that took a look into Britney's life and career amid her ongoing conservatorship. After telling People he was thankful for "all the love" Britney was receiving from fans around the world, he took to Instagram to accuse Jamie of constantly putting obstacles in their relationship.

"Now it's important for people to understand that I have zero respect for someone trying to control our relationship and constantly throwing obstacles our way. In my opinion Jamie is a total dick. I won't be going into details because I've always respected our privacy but at the same time I didn't come to this country to not be able to express my opinion and freedom," Sam wrote.

Britney Thanks Sam For His Support During Her Conservatorship

In August of that year, Britney took to Instagram to gush about Sam and thank him for his constant support during her conservatorship battle. She even made a plug to get him in the next "Fast and Furious" movie.

"Not only has this cute asshole been with me through both the hardest and the best years of my life but he happens to be an extremely good cook 👨🏽‍🍳! Fast & Furious franchise, don't miss out on your next star 🌟🏎️👗🤓 !!!!" Britney shared.

Sam and Britney Officially Get Engaged

While Britney's conservatorship drama was still ongoing, Sam decided to pop the question to Britney with a stunning four-carat engagement ring in September 2021. The couple took to social media to share the happy news, with Britney writing, "I can't f---ing believe it!" Sam's manager Brandon Cohen also confirmed the news in a statement, letting fans know that the couple was grateful for everyone's support.

"The couple made their long-standing relationship official today and are deeply touched by the support, dedication and love expressed to them," he told People.

The Couple Expand Their Family With a Puppy

The following month, the two added a new member to their family: a puppy named Porsha. Sam shared sweet photos with the pup on Instagram along with a video explaining that the dog was meant to serve as protection for Britney.

"Her name is Porsha and she's meant to unconditionally love you and it's going to be trained to protect you from any motherf---er that comes around you with bad intentions," Sam said in the video.

Britney Celebrates the End of Her Conservatorship With Sam

In November, Sam celebrated the end of Britney's conservatorship and the beginning of their new life together. He marked the moment by simply sharing a pink graphic that read "Freedom" along with the caption, "History was made today. Britney is Free! ❤️'"

Sam Gushes About Britney in a Rare Interview

Following the end of Britney's conservatorship, Sam gave a rare interview where he spoke about the couple's relationship. He explained that he had always been attracted to Britney’s passion and was so impressed by how "sweet and so humble" she was despite her fame.

He also gave a look into their wedding planning process, sharing that he was letting Britney take the lead — and wanted to keep everything else private.

"She's wearing the pants. And something with my relationship is, it's very hard, but something about a secret and something about spontaneous things and privacy — you don't get that anymore — so I'm really trying to respect that. Not only for her but for me. Because I want to have this amazing future, and if you practice that now, I think it's always going to be there," Sam said on the "Give Them Lala" podcast.

It turns out that Britney and Sam's wedding may have been sooner than everyone anticipated because in April 2022, Britney began calling Sam her husband on Instagram. While she hasn't confirmed that they actually got married, she's shared several posts referencing Sam as her "husband." She made the reference for the first time while sharing photos of Sam from a vacation.

"Trust me I know the beauty in where I am and it's much appreciated … so here's me shooting pics of my HUSBAND 💍 !!!! I have to do big letters cause that what my sister has always done on her gram," Britney wrote.

The Couple Announce They're Expecting Their First Child

Later that month, Britney seemingly revealed that she and Sam were expecting their first child. In an Instagram post, she shared that she discovered the happy news when she began gaining weight around their trip to Hawaii and decided to take a pregnancy test.