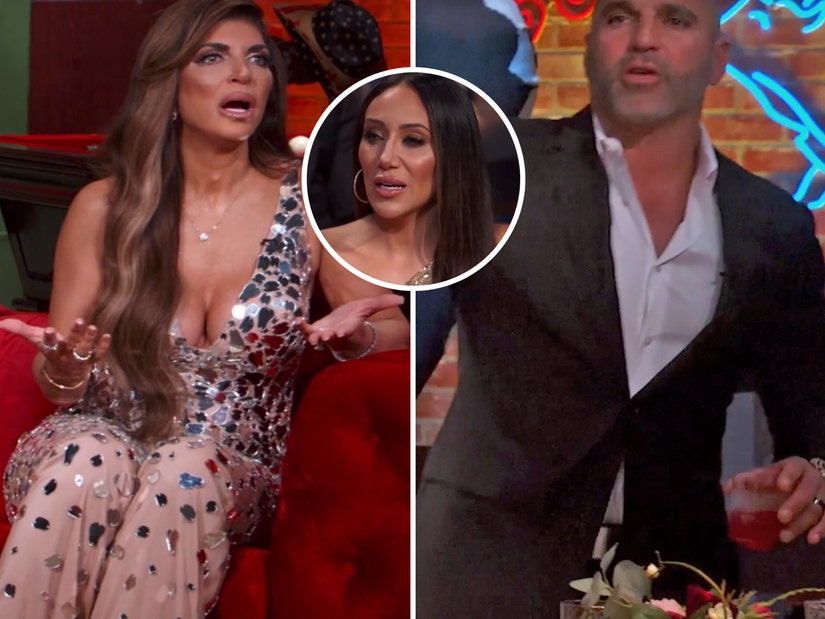 "Let's stop faking like we have a relationship," Melissa says to her sister-in-law during testy exchange.

The family feud between Teresa Giudice, brother Joe Gorga and sister-in-law Melissa Gorga blew up on Part 1 of the "Real Housewives of New Jersey" reunion -- and things got so bad, Joe wound up pulling a textbook "Housewife" move by walking off set while exclaiming he had "quit" the show for good.

The drama started over Teresa's engagement to Luis Ruelas and the fact she would not have her sister-in-law as one of her bridesmaids. While Melissa said she wasn't hurt at first because she assumed Teresa's daughters would fill all those spots, her feelings changed when she found out Luis' sisters would also be included.

T defended her decision by telling Melissa she speaks with her soon-to-be-sisters-in-law "all the time," before adding, "This is the thing, honey, we're not close. You're my sister-in-law, but we're not close."

"Understandable. My heart's beating right now because it's kind of sad. We have a lot of memories, even if we're not close," Melissa responded, before pointing out how she was there for Giudice's girls when she was in prison and spent time in the hospital with both Teresa's mother and her late father. "There was a lot I've done, please don't take that away from me. We have history, me and you, and I love you very much and I'm happy for you but I think you should remember what family is. I'm more your family than those girls you met one year ago and it's very sad that you don't feel that way." 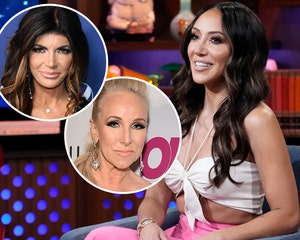 "I don't feel close to you, that's the thing," said Teresa, with which Melissa finally agreed out loud. "I have to be honest with you, let's stop faking like we have a relationship," Melissa told her, "because you've proved to everyone that we don't. It's about Luis, you and Luis' family, beautiful."

Melissa was also upset that Luis' family was seated with Teresa at the couple's engagement party, while all of her family was relegated to a separate table. T, however, countered that she didn't plan the seating assignments. Melissa then brought it back to the bridesmaid thing, saying that if she were getting married now, Teresa would "100%" be one -- before pointing out that T actually was a bridesmaid when she married Joe Gorga. Teresa then seemed upset that her brother's wedding happened when she was 9 months pregnant, like they planned it around her pregnancy.

Andy Cohen then brought out Joe Gorga and things only went downhill from there. First, he called his sister "wrong" for excluding Melissa from her bridesmaid group -- saying he would never "disrespect" her by excluding Luis. They all then explained that while Joe was asked to be a groomsmen, he was still weighing his options after the Melissa snub. When T said Joe doesn't even give her fiancé "the time of day," Melissa shot back, "Your brother says you never call him, it's insulting. I love family, bulls---, nobody believes you anymore."

Teresa then dug into some Housewives history and pointed out how when Melissa joined the show, she sided with some of Guidice's enemies, including Caroline Manzo and Jacqueline Laurita. While she said the two do not have a close relationship, she added that she still wanted one with Melissa.  After Joe pulled out the "I'm not mad at you, I'm just disappointed" card, the crosstalk continued -- before a power outage thankfully broke up some of the tension. 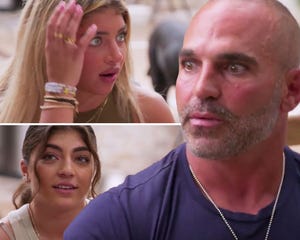 When the lights turned back on, they addressed the Gia of it all, after Joe and his niece went at it throughout the season over Gorga's negative comments about Joe Giudice. "I was really upset," said Gorga, before Teresa said she didn't intervene because her daughters are "very strong minded." She also sided with the girls, telling her brother, "I know you were sticking up for me, but that's their dad." Gorga, however, said his own kids aren't too thrilled by what Joe Giudice has said about him on the show -- before Teresa agreed that she's also "embarrassed of his actions."

As the heated conversation continued, Andy read a fan comment about Teresa saying, "If Margaret Josephs called Luis "Louie" Ruelas a little bitch boy, you'd go crazy, but when Jennifer Aydin does it to your brother, it's no big deal." That was in reference to a comment Aydin made about Joe during the most recent season -- and while Teresa said she wouldn't care if the same was said about Luis, she also accuses Joe of being "a little too much involved" in the fighting between all the women.

"F--- you people. Be a sister once in a while, f---ing moron," he said to himself as he stormed off set. Melissa, meanwhile, called out Teresa for taking any chance possible to put down her brother, before the episode came to an explosive ending.

The RHONJ reunion will continue next Tuesday on Bravo. 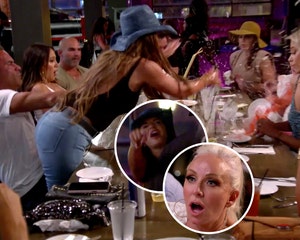