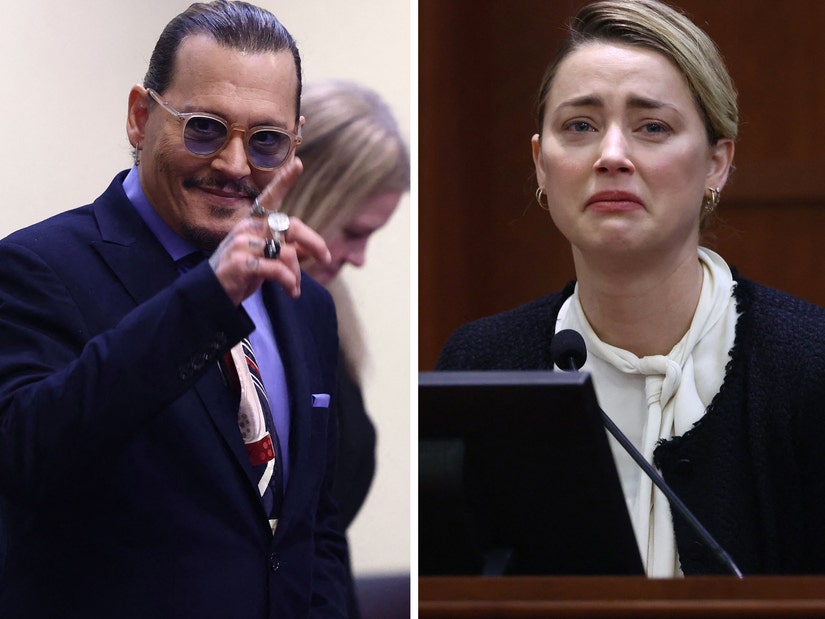 Heard also claimed she pushed for a prenup ... and believed Depp had hit "rock bottom" after a night out with Paul Bettany.

Amber Heard was back on the stand Thursday as her testimony in Johnny Depp's defamation trial continued, as she detailed some of the alleged things the two would argue about throughout their relationship.

She said that she's always been "really independent" and had a hard time with Depp supposedly pushing her to work less. "I kept having to justify taking work," she claimed, saying she would tell Johnny she needed to take on more roles so she could help support her family.

"He said you don't have to work kid, I'll take care of you ... it became a real fight," she claimed, saying she also felt pressured and concern about the romantic scenes involved in a lot of her work.

"I started saying, 'No, I won't take the sex scenes, I'll take the part where I don't play that kind of character.' Then I started minimizing the kinds of kissing scenes I had and eventually I had to change the wardrobe I had in the movie," she said. "I couldn't have a sex scene. It didn't happen all at once. Eventually, I found myself pushing as many scripts off my desk as I could, picking the ones with minimal makeup, dressed as conservative as possible, minimize the scenes I had where I had a romantic involvement."

When she started working on "London Fields," Heard said she was invited by one of her male costars to join him and additional cast members to a concert "to kind of break the ice" at the start of production.

"I already knew I couldn't be photographed, even if it was platonic, I couldn't be photographed with men or women that other people could possibly spin as romantic. I learned that in January the hard way," she said. "I asked [Depp] permission if I could go to this concert with the cast ... he said that if I accepted the invitation and went out to the concert, the engagement would be off and the relationship would be off and I was foolish, naive for thinking that people could invite me to a concert in a platonic way."

She claimed he also said things like, "How could you be so stupid, so foolish, you should be smarter than this," before she apologized and he started sending her "cryptic messages about my foolishness."

One of the texts she provided was then shown in court, reading: "I don't want to make anything an issue, baby ... but I literally have been on the ground just 14 f---ing hours from leaving your side!!!! You know what I want, who I am and where I want to go with us ... You know very well what type of f---ing man I am. And, yet ... You lay a gauntlet before me that you know Is the very species of danger that will always attract me into a very tempting test... What's behind that door??? Almost impossible to nit take you on ... You want me to roll the dice??? This sounds more like an aggravated ultimatum than the soft words that could help to make us both feel better!!! Don't test me, please."

Heard said Depp's behavior continued to spin out of control as he started to film "Mordecai" in London with Paul Bettany.

"There were days when he wouldn't come home or they couldn't get him up on set. He'd be asleep in his trailer, sleeping whatever he'd done the night before off," she claimed. "I remember he missed a few days of work that way. It struck me because in our experience, in our job, you don't miss work. It doesn't matter how sick you are, you go. It's millions of dollars every day."

"One day he didn't come home and I was worried sick. I found out he was in a hotel room with Paul Bettany ... when he came home, they had to carry him home. I watched it," she said. "I was shocked that he could do it, one of the security guards carried Johnny like a baby into the house ... I watched his assistants and other security guards shaking their heads, I remember thinking, this has gotta be it, this has gotta change, surely this is it and he was understandably very, very sick for at least two days."

She said she had "a lot of conversations with his team" at that point and felt they were all on the same page, "that Johnny had finally hit rock bottom and finally he felt like changing for good."

Heard also detailed an alleged fight she got into with Depp involving his daughter, Lily-Rose, in November 2013. She said that while she had only known his kids for a short period of time, she already "started to feel protective" of them -- and raised concerns when "a famous musician over the age of 18" stayed at the house.

"I felt protective over Lily-Rose and concerned and naturally they were not my children, it's not my place and I understand that, I know it's a sensitive subject, so I understand why Johnny got so upset with me," she said. "But that and the introduction of the weed with his daughter, she was so young, I felt protective. It's not my place and I made him really angry by weighing in on that."

Despite those alleged incidents, Heard started to believe Depp was getting back on track and he even re-proposed to her in front of their respective families. She said that before the engagement party, she started to push him on the subject of getting a prenup.

"I know he earned significantly more than me, I wanted to eliminate any doubt in his mind, so I brought it up to him. Johnny said he would tear it up. He said if you ever brought one up to me, I'd tear it up," claimed Heard, who said Depp told her the "only way out of this is death."

"He said, 'Kid, are you already thinking about getting out of this? You already planning on leaving?'" she continued, adding Depp "accused me of having one foot out."

She also claimed that at their engagement party, Depp "disappeared upstairs" almost the entire time -- saying he was "sharing drugs" with her father, who was "addicted to the same thing Johnny was." Heard said they, at one point, ran out of drugs and her father had to leave the party to get more.

"I tried to get Johnny to come downstairs and he just snapped at me, verbally told me to 'Shut the f--- up,'" she added.