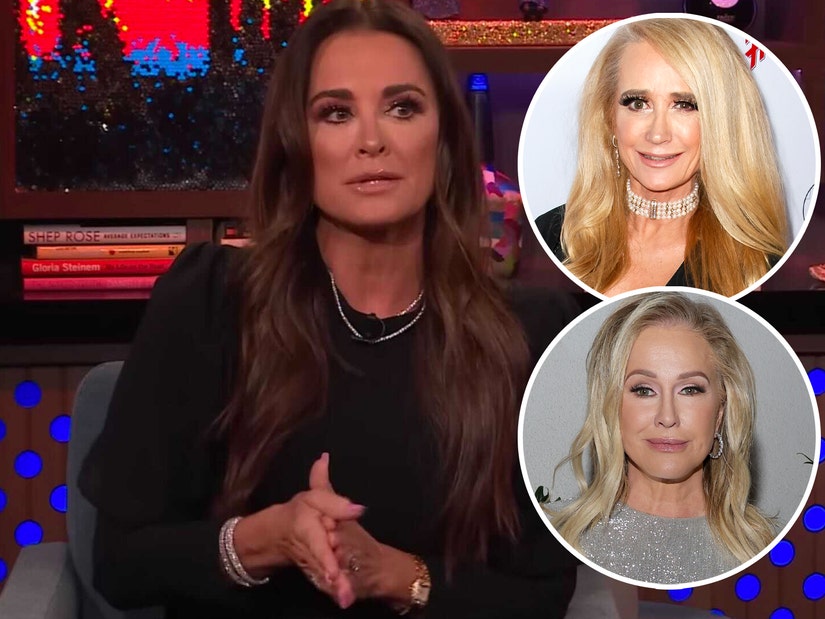 It's clear the sisters weren't speaking to each other recently.

Kyle Richards and her sisters Kim Richards and Kathy Hilton have always had a bit of a roller coaster relationship -- one that currently appears to once again be on an upswing after a recent falling out.

The trailer for the new season of "Real Housewives of Beverly Hills" includes some tears between Kyle and Kathy -- and Garcelle Beauvais' recent appearance on "Watch What Happens Live" alluded to even more tension between the two. Last month, Garcelle said she was actually closer to Kathy than her own sister at the time.

Appearing on WWHL herself last night, Kyle was first asked about Beauvais' comments.

"No, that's not true. We are blood, we are sisters. You can't compare after doing a reality show together for one season," she told Andy Cohen. "That was very hurtful actually, but [Garcelle] did apologize."

Richards went on to say that the recent death of her longtime friend Lorene -- who died over the weekend following a battle with mental illness -- has brought her and her two sisters closer again.

"My sisters and I are speaking again because they've also known Lorene since she was 7, so life works in funny ways," said Kyle, with Andy picking up on the "speaking again" comment. "[Kathy and I] were having a bit of a rough patch after the season. Kim, we have good and rough patches, but we're in a good situation right now."

On the after-show, Kim came up again when a viewer wondered what Kyle knew about her sister's falling out with Brandi Glanville -- before asking her own thoughts on the ex-RHOBH star.

"That's been a while that they had a falling out. Oddly enough, after Brandi wasn't on the show, she's made an effort with me, she'll text me and check in. I've seen a totally different side of Brandi now that we're not on the same show together," she said.

"She's very sweet with me and she was always a very good friend to my sister Kim. I'm not really sure what happened with their falling out, but they do not speak and now I speak with Brandi, via text, here and there," Richards added. "We've all grown and evolved over these years and Brandi definitely has. It's nice to see the softer side of her."

Elsewhere on the episode, Kyle was asked to reveal how much she missed her friendship with Lisa Vanderpump -- giving it a 3 on a scale of 1-10 -- before Dorit Kemsley shared that LVP hadn't reached out to her since her horrifying robbery ordeal.

Kyle also confirmed her least favorite RHOBH costar was Carlton Gebbia, or as her daughters -- who were guest bartenders -- referred to her: "The witch."