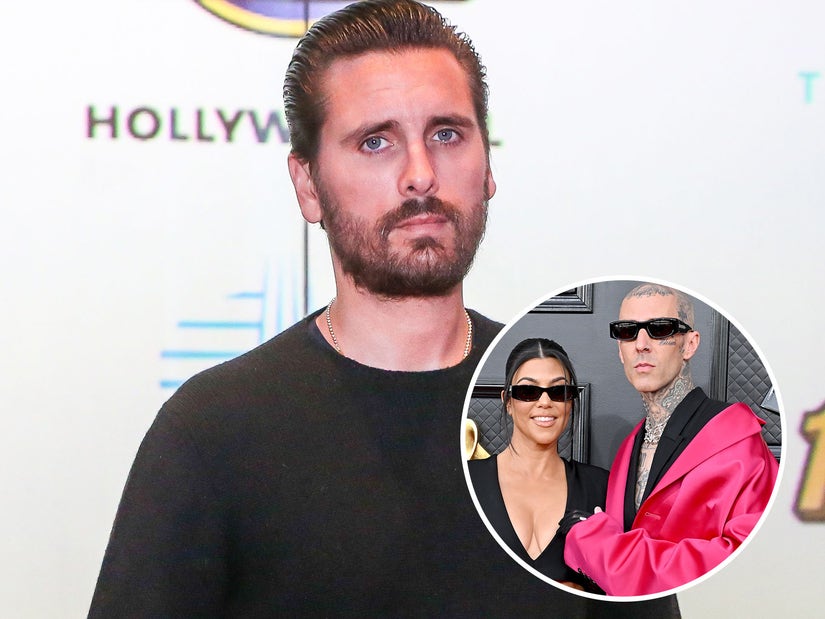 Scott Disick jetted off to an undisclosed tropical destination as ex Kourtney Kardashian and Travis Barker tied the knot in Italy.

While Kardashian and Barker were exchanging their nuptials on May 22, the Talentless cofounder took to his Instagram Story to share a photo looking out of an airplane window, with the caption, "Where 2?"

Shortly after his first post, Disick posted another snap of a screen that depicted he was at an altitude of 776 ft and wrote, "Next stop, the beach" with his destination unknown.

Kourtney and Travis said "I do" at L'Olivetta, a villa owned by Dolce & Gabbana in Portofino, Italy on Sunday with their closest friends and family for the third time.

Back in April, the newlyweds exchanged their vows in an unofficial ceremony in a Las Vegas chapel after the Grammy Awards.

Earlier this month, Barker and the Poosh founder made headlines when they legally tied the knot at a Santa Barbara courthouse. It turns out the only member of the Kardashian-Jenner family present at the nuptials was her grandmother, Mary Jo "MJ" Campbell as well as Barker's father, per TMZ.

Drama over the engagement was featured in an episode of "The Kardashians" when Travis proposed to Kourtney in Santa Barbara, and assembled nearly the entire Kardashian clan and his children Landon, Alabama and Atiana to be there to celebrate with them after Kourtney said yes.

"Me, personally, if I got engaged 50 minutes away, I would have just said, 'Someone get in the car and get my kids here,' and P would have been ecstatic," he told Khloe. "We're acting as if the place was 10 hours away. They can have their life, I just don't want to be pushed out of family affairs that include the kids and things we normally would do. I just don't want to lose the dynamic of having all of you guys."