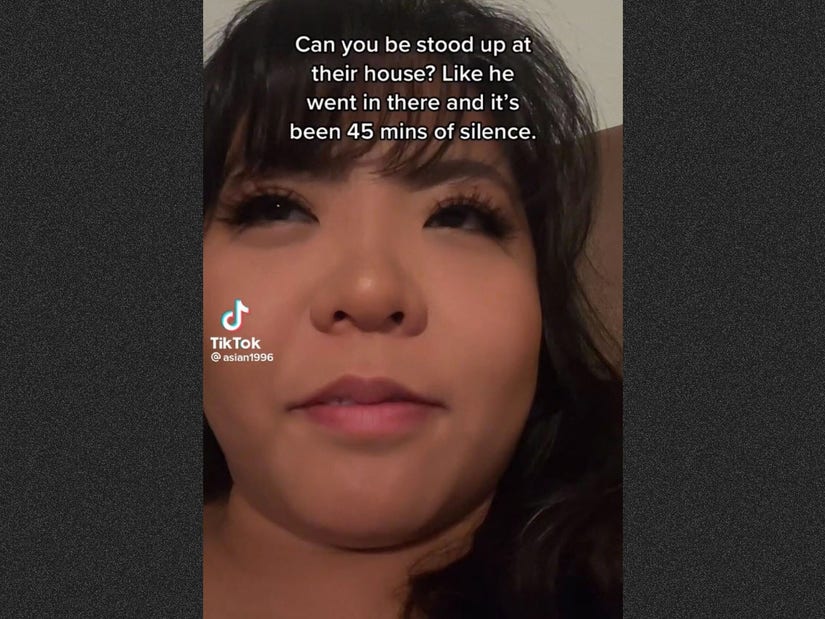 Venturing out into the dating pool these days can be rough.

Exhibit A: TikTok user Hannah Lee says she thought she got stood up while on a date with a man at his own house...until she made this discovery.

Hannah filmed a short video of herself seemingly sitting on her date's couch with the words, "Can you be stood up at their house? Like he went in there and it's been 45 minutes of silence."

She added in the caption to the short clip, "I'll wait for 30 more mins then I'll leave lol idk where he went."

The video ends with her zooming into the door he disappeared through with a popular sound on the app of a child singing the words, "I want to go home."

TikTok users flocked to the comments to share their own thoughts on Lee's experience and offered theories as to why he went missing in the middle of their date.

Some viewers proposed that he was suffering from lactose intolerance and needed an extended bathroom break and others claimed that he got caught up browsing Reddit while on the toilet and forgot about their date.

Few others speculated that he may have been on the phone with his girlfriend or had a panic attack because of the social anxiety of meeting someone new.

Others said maybe it was a passive-aggressive hint and he wanted her to leave and questioned why she had waited for so long.

"So he gone for 45 minutes and you didn't already leave, and then you're staying an extra 30?" one user asked.

Another commented, "After 10 minutes you check in. Any longer you just go home."

"You sat there … for 45 minutes?" one person asked skeptically.

In a followup video Hannah gave an update on what her date had been up to:

Apparently after waiting for close to an hour for her date, Hannah claims that she had finally gone looking for him in his room and found him completely naked on his bed.

She said that her date had figured that if he had left her alone for a considerable amount of time, she would eventually come looking for him and find him in a compromising situation which would spark the two getting intimate.

According to Hannah, his efforts weren't a complete bust. When a user asked if his unusual method for getting busy had "worked" she said, "Yes but no but yes kinda."

"I just don't understand what made him think that was a good idea," she concluded.