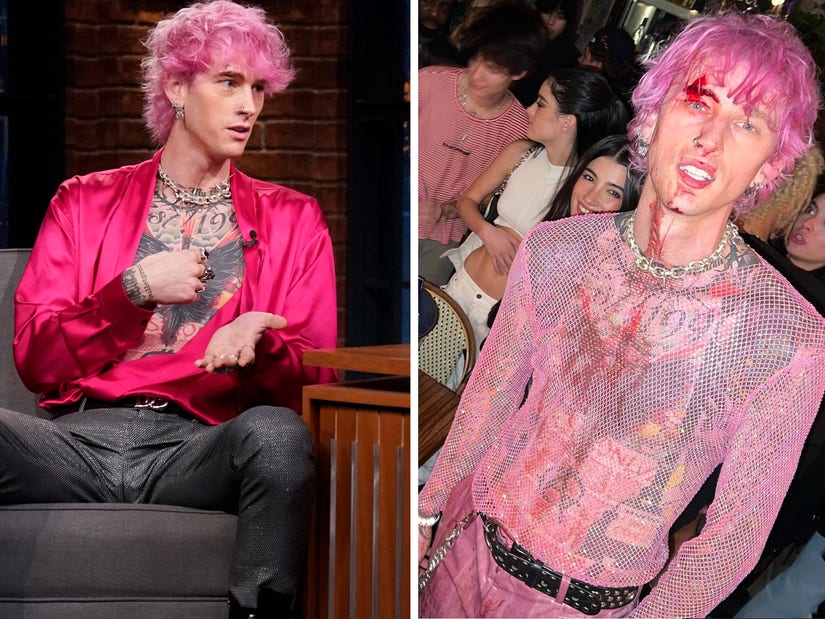 "In medicine, they call that asking for it," Seth Meyers joked to MGK.

Machine Gun Kelly made headlines after he smashed a champagne flute against his head following his concert at Madison Square Garden on Tuesday -- with the accident leaving his face a bloody mess.

And while appearing on "Late Night with Seth Meyers" the following day, the 32-year-old singer shared the story behind the accident, revealing the very-MGK reason why he smashed the glass on his face in the first place.

"Last time you were here, you'd just done the VMAs, you'd hurt your hand at the VMAs," Meyers, 48, pointed out, "and you hurt yourself again last night at MSG."

In response, MGK quipped, "Yeah, I'm gonna start having doctors around me every time I see 'Seth Meyers' on my schedule."

When asked what caused his injury, which left Kelly with a gnarly cut above his right eye, MGK said, "You know when you clink a champagne glass with a fork? ... Yeah, I didn't have a fork. So I just clinked it on my head."

"You know what? In medicine, they call that asking for it," Meyers joked in response, to which Kelly laughed and noted, "Yeah, so I had a serious case of that last night."

Meyers then went on to ask Kelly about his sold-out show at the New York City arena.

As the "Bloody Valentine" singer went to respond, he put his hands up to rub his face, before he remembered his injury.

"Sorry. I keep forgetting I have this," MGK admitted, gesturing towards his wound, "but I'm a hand talker."

The glass incident went down on Tuesday night at Catch in New York City. According to Page Six', at the afterparty, the "Emo Girl" rocker said into a microphone: "I dont give a f---, bro. I don't give a s---," and then smashed the flute on his forehead, sending pieces of broken glass into the air.

On Wednesday morning, Kelly posted a video of the bloody moment on his Instagram Stories. Alongside the clip he wrote, "and this is when things turned..."

He also shared a series of photos from his time in NYC for his concert on his Instagram profile. The post included several shots of MGK with his bloody-dripping gory wound on his face. The punk rocker hilariously captioned the post, "NYC you're my bloody valentine 🩸❤️‍🔥."