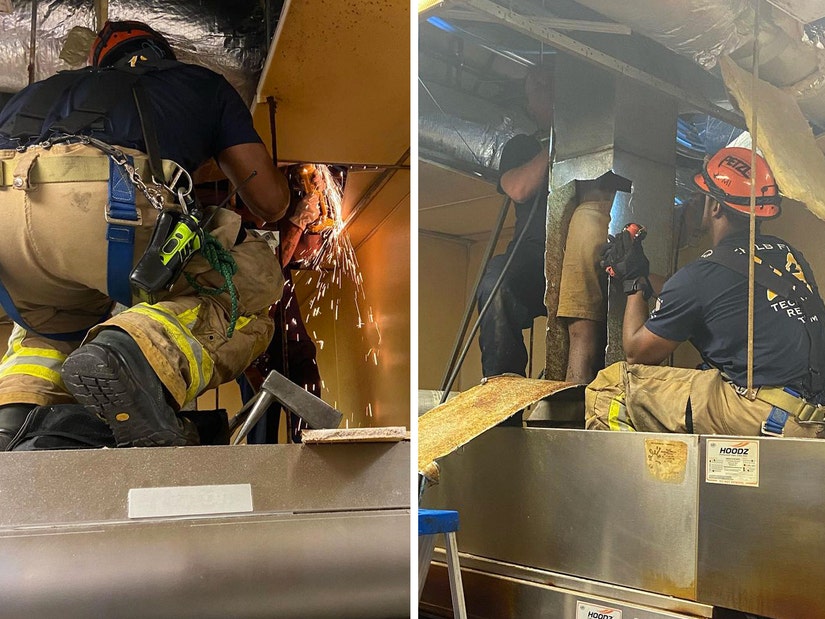 Employees heard his screams when they arrived to work on Tuesday.

A man in Lithonia, Georgia was hot-n-ready for rescue this week after getting trapped in a vent at Little Caesar's Pizza.

DeKalb County Fire & Rescue responded to a call about the stuck stranger early Tuesday morning, after employees from the same shopping center as the pizza place heard screams next door.

"Crews responded to a male trapped in an oven vent at Little Caesar’s Pizza, in Lithonia. The man gained access from the roof after the close of business," said DCFR in a statement shared to Instagram, along with photos of the rescue operation.

"An Army recruiter heard the man's cry for help as she arrived for work, at her office next door," they added. "Units on scene used a variety of tools to remove the male with no injuries."

Staff Sgt. Brittany Davis -- who works as a recruiter for the U.S. Army at a career center in the plaza -- first heard the man's cries, saying she and a coworker thought they were coming from the roof. When Davis went into the restaurant, however, she and a worker there tracked the noise to the oven vent.

"He was actually saying that he can't breathe, that he's having a panic attack,” Davis told CBS46, "and of course, I was just concerned for him. I'm just glad they didn't turn the oven on because he would've been toast."

The man was placed in handcuffs at the scene and taken to a hospital to be check out after reportedly complaining of dehydration and friction burns.

DKPD Public Information Officer Elise Wells tells TooFab, "We have pending charges for Criminal Attempt Burglary but are not releasing the suspects name at this time."